Zimbabwean-born actor Regé-Jean Page sizzles on screen in Netflix's popular period drama, and his costumes add layers to his sexiness 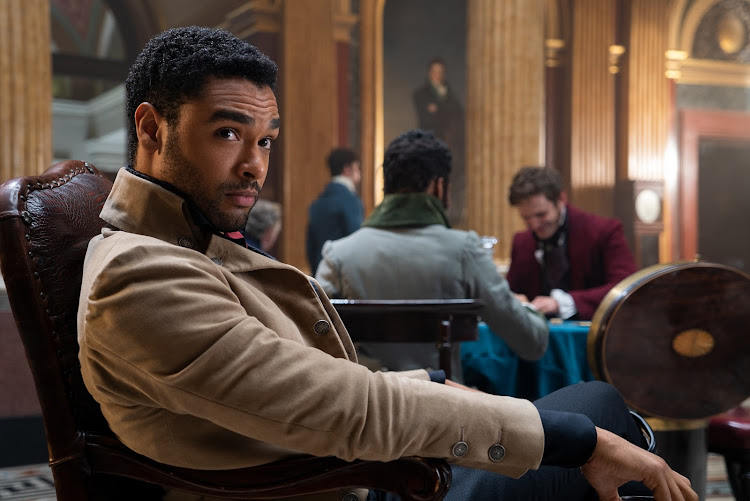 Regé-Jean Page as Simon Basset, the Duke of Hastings, in 'Bridgerton'.
Image: Netflix

But it's found delicious delight with fans as a candy-coated bodice-ripper, packed with barroom brawls and secret assignations, bewigged, busty babes and handsome dukes in pantaloons and sexy, high, leather riding boots.

Speaking of which, Zimbabwe-born Regé-Jean Page plays the dishy Duke of Hastings, Simon Basset, whose tight-fitting costumes may usher in a new trend in dressing for the show's millions of viewers.

The young heartthrob has been cited by many as the best reason to watch the show, even when he has his clothes on. And high-fashion labels have emulated the duke's style and that of the show (and the genius of costume designer Ellen Mirojnick, who made the wardrobe into one of the characters).

WATCH | The Duke of Hastings most memorable moments in 'Bridgerton'

While tracksuit pants, athleisure, loungewear and pyjamas have become a pandemic staple, some fashion houses have embraced the opulence of Bridgerton as an antidote to all things blah.

"It's like a big ice-cream sundae with all the toppings," Mirojnick told WWD magazine. "It's frothy and delicious, and total escapism."

"Regé was such a vibrant leading man," continued Mirojnick, who outfitted him in royal-tone velvets. "When Regé came into the room, as the costume designer you felt immediately what he could and couldn't wear. The costumes are of a period fit and a period feel, so not every modern young actor can walk in, put on the clothes and own them. Regé, on the other hand, was able to do it. They suited him so perfectly." 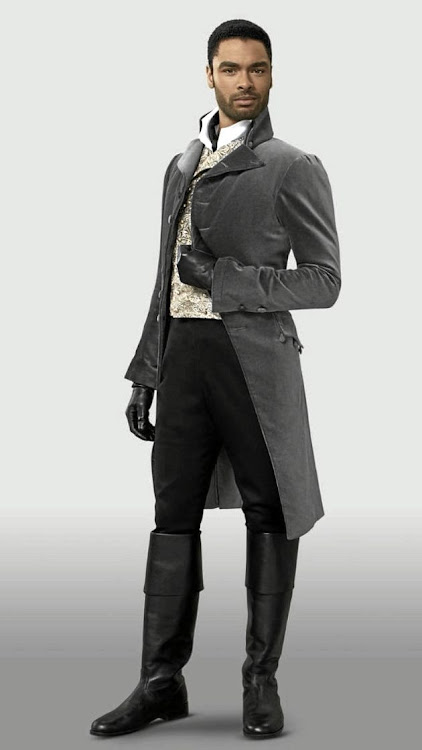 The Duke of Hastings' knee-length coats are tailored to show off his manly figure.
Image: Netflix

The duke's character development through the series was also visually represented by his clothes. At first he only wore monochromatic outfits. Lady Danbury pointed this out when they were reunited after the death of Hasting's father. As he spent more time with Daphne, his love interest, he began wearing rich colours like deep velvet reds, showing his changing emotional state from distant and aloof to awaking love and lust.

Mirojnick said Page stood out among the cast for his individuality, which was translated into the dress sense of the character. "We needed to find a silhouette that would amplify all of those character traits," she told Another Magazine.

"We used a collar that was a little taller — it couched his neck and jawline, but we kept the shirt open because there was no need for him to fit in with anyone. We included a scarf and tucked it into his shirt — we didn't wrap it around his neck. We had an embroidered velvet for his waistcoat that he could have picked up along his travels."

These are some of the duke's signature pieces:

Mirojnick looked at Page and thought: simple shapes - not fussy. The fabrics of his waistcoats should be ornate to stand out against the darker items in his wardrobe. They could have been found in India, China, Morocco, parts unknown - lending an air of the exotic traveller to his character which has brought men's vests back into fashion.

The knee-length coat in rich, luxurious velvet shows off Hasting's manly figure. It's tight and nipped in at the waist with a simple flat collar that stands up around his neck and holds the ruffles of his white or black shirt.

"He only wore dark trousers and the colouration would be in dark red, golds, blacks, a bit of silver, and a purple tone. And a bit of taupe and grey," said Mirojnick.

"There was nobody that was dressed quite like the duke, with the exception of the tall boots, which most of the male characters wore."

His mother's green brooch as an accessory that's always on his waistcoat. It's not particularly noticeable, but it's something personal to him and shows his depth of character and emotion. It's a constant reminder of his life's defining trauma and the relationship he has with both his dead mother and his absent, abusive father. Wearing the diamond- and emerald-encrusted enamel brooch was Bassett's way of keeping his mother close to him. 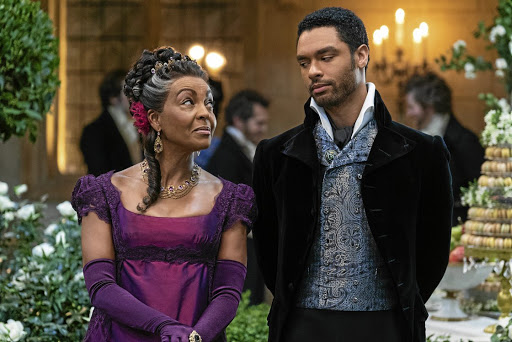 Look closely and you'll note that the Duke of Hastings often dons a broach belonging to his late mother on his waistcoat.
Image: Netflix

There's no doubt the show has skyrocketed Page into sex symbol status — his steamy scenes required the costume team to consider not only how he dresses, but also how he undresses. "It's a careful choreography," Mirojnick told Page Six magazine.

"How does his shirt come off? Does she rip it off? Is it easy for his trousers to drop?" These were considerations that haven't been thought of in previous Regency-era dramas, though clothing and style were paramount to class and status during that time. After all, the Regency era produced Beau Brummell, one of the most famous arbiters of men's fashion in history — he was rumored to have polished his shoes with champagne.

Clothes maketh the movie: 10 of the best films for fashion lovers

Laduma Ngxokolo is feeling 'surreal' after seeing his fashion designs in the film's trailer and promises this is just a taste of what's to come.
Lifestyle
7 months ago

Regency England has been reimagined in this racy Netflix series, writes Leana Schoeman
Lifestyle
9 months ago