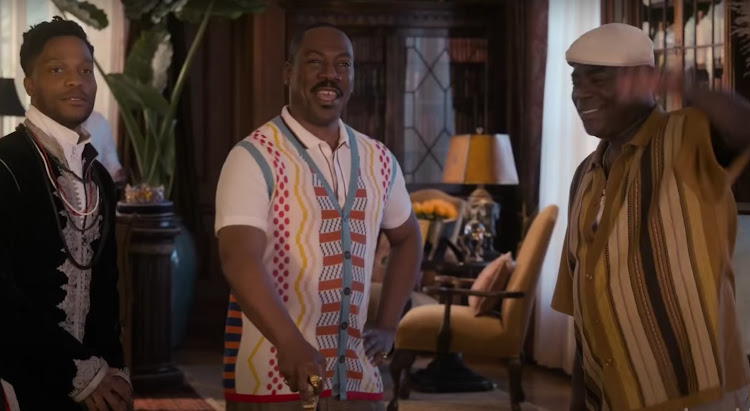 Actor Eddie Murphy can be seen wearing one of MaXhosa Africa's signature knits in this screen grab from the trailer for 'Coming to America 2'.
Image: Amazon Prime Video/YouTube

There was great excitement when Eddie Murphy was spotted sporting a design by leading local designer Laduma Ngxokolo of MaXhosa Africa in the trailer for the much-anticipated sequel to the hit comedy Coming to America.

Eagle-eyed fashionistas would have noted however that Murphy’s vest wasn’t the only MaXhosa Africa design to appear on screen: SA actress Nomzamo Mbatha also stars in the flick and can be seen wearing one of his garments.

Ngxokolo, who says he’s still feeling “surreal” about having his work featured in such a prominent film, was particularly chuffed about this. He explains that Mbatha actually schooled the cast of Coming to America 2 about the heritage behind the brand’s designs (his signature prints are inspired by traditional Xhosa beadwork patterns). 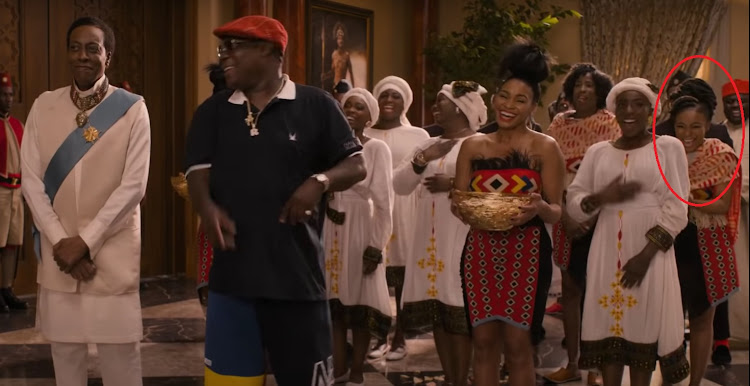 SA actress Nomzamo Mbatha can be seen sporting a look by MaXhosa Africa in this screen grab from the trailer for 'Coming to America 2'.
Image: Amazon Prime Video/YouTube

“[Mbatha] became the greatest ambassador for our brand while they were shooting the film in LA and Atlanta,” says Ngxokolo.

So how did MaXhosa Africa pieces end up in Coming to America 2 in the first place? The designer says he was approached by Ruth Carter, the movie’s costume designer who won an Oscar for her work on Black Panther.

Carter briefed him on her vision. “I had to go back to the drawing board and conceptualise with her and show her various ideas of how I could interpret certain characters from the movie and she chose the best interpretations out of all the characters,” he explains.

WATCH | The trailer for 'Coming to America 2'

Carter also shared with Ngxokolo that her team was pleasantly surprised that they had used so many MaXhosa Africa pieces so prominently in the film. The movie will also feature garments from another well-known SA designer, Palesa Mokubung of Mantsho.

Ngxokolo is keen to see the full movie and find out how people will react to his clothes. He hopes that international audiences will fall in love with the MaXhosa Africa brand for its celebration of culture after watching it.

• 'Coming to America 2' will be released on March 5 on Amazon Prime Video.

Self-proclaimed “King of Bling” Somizi Mhlongo-Motaung has teamed up with a popular local shoe brand, Bathu, to launch BathuXSomizi sneakers
Lifestyle
5 months ago

South Africans were left divided on this one.
Lifestyle
5 months ago