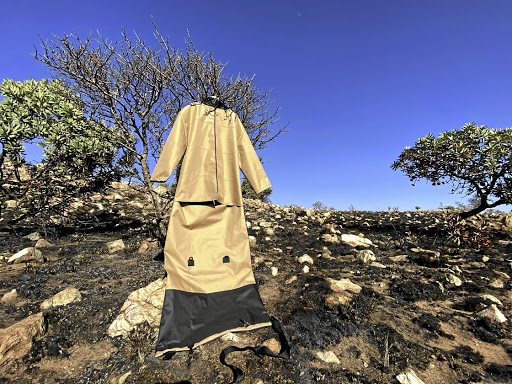 The Homeless Home jacket, the brainchild of Toni Rothbart and Carlo Gibson, converts into a sleeping bag.
Image: Supplied

When Toni Rothbart and Carlo Gibson were introduced for the first time at the beginning of this year, something important fell into place for both of them.

Rothbart had grown weary of the world of corporate event management, disillusioned by the excess and the extravagance underlying the glossy facade.

Gibson, one half of the celebrated South African label Strangelove, had spent the better part of 2020 figuring out how to reconfigure his CMT (cut, make, trim) factory to cater for our strange new world.

The two felt an imperative to divert their efforts towards remedying social problems leading to the creation of their nonprofit company, Make-Good SA.

He also experimented with incorporating shweshwe panels, to personalise the utilitarian garments. "I didn't want the nurses to feel like they looked like mechanics for humans. I wanted them to look like healers," Gibson says.

Rothbart was encouraged by the way in which Gibson had taken initiative.

"Carlo used the skills that he had, used the social innovation pathway, in order to do what it was that he could do," she says. "He raised some funds for that and kept his factory going, kept his guys fed, and kept a bit of positivity." 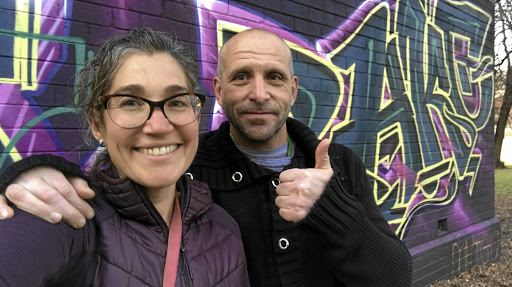 Gibson's approach embodied many of the ideals Rothbart was working towards.

"I was coming out of the world of live events, of corporate events," she says. "The world of live events is so money-heavy and wasteful, and it was something that really depressed me for so long. So I had left that world quite some time ago, and was trying to figure out how I could use the skills and capabilities I had in order to make a difference in the world.

"My brother called me up and said: 'You've got to chat to Carlo. He's got all these ideas, and you share this creative slant; I think you could work really well together.'

"And so we met in February, for what I thought would be a quick cup of coffee, and we ended up just chatting and chatting for hours.

"We realised we were totally on the same page about the power we have to make a difference in people's lives, because of how we see the world, and because the coronavirus had changed things."

Rothbart and Gibson are now working on various projects though Make-Good SA. This includes the Homeless Home project: manufacturing, and distributing a mobile, lightweight jacket that converts into a sleeping bag.

"The Homeless Home was something that Carlo had been thinking about for some time," says Rothbart. "He had gotten the idea while cycling a few years ago, understanding that in order to change an item of clothing into something that then needed to be insulated, there was a [method] that entailed stuffing [the garment] with newspaper." 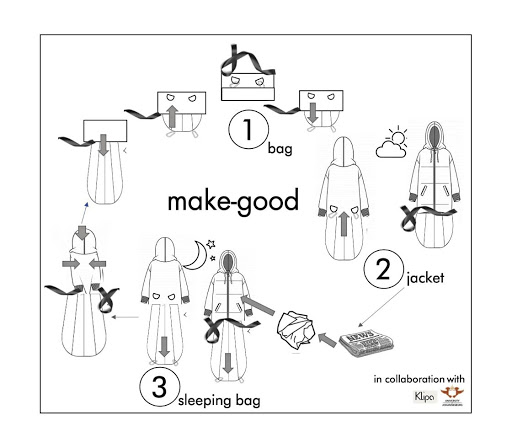 How the Homeless Home jacket converts into a sleeping bag.
Image: Supplied

"It was very interesting for me to start thinking about what home means, even to start reading about other people's ideas of homes," says Gibson. "A home, which most of us take for granted if we're lucky enough to have one, actually means simple things, like having a place to be private."

The recipients' feedback is integral to the success of the project.

"Discussing the product with homeless people is a hugely important part of the process," says Gibson. "After this winter we'll be onto our fourth version [of the Homeless Home]. Through discussions with the community, we're learning what the community actually needs."

"At the end of the day, it's all very nice for us to design something for them, but we're not living hard on the street and we don't know what kind of difficulties these people are encountering every day," says Rothbart.

"So it's been a learning experience for us, in order to see how what we initially thought of then actually worked, or didn't work, and how we needed to change [the product] in order to make it functional.

The homeless community around us … can contribute so much, but nobody really gives them a voice

"People have been incredibly generous with their time and their ideas, and that in itself has been humbling," Rothbart says. "The homeless community around us … can contribute so much, but nobody really gives them a voice. It's just feed the homeless, or hide the homeless, or lock the homeless out the parks, and nobody actually asks them what they need or what their lives are."

"Homeless people, as much as they're homeless, have community, and they build really meaningful relationships with each other," says Gibson. "That was quite an eye-opener to me: I didn't really put two and two together. Through my experience with this project, I've learnt of tight communities that care about each other and have compassion for each other. It's a very big thing, actually."

Gibson and Rothbart say they hope the garments will give prospective buyers an opportunity to communicate with the homeless individuals around them.

"Homelessness is a big deal, and it doesn't seem to be going anywhere," says Gibson. "We need to interact with each other in a nice way, and try to understand each other as human beings first and foremost."

Gibson says the project is "a stepping stone, to show people what we're capable of. Our aim is to engage with all different kinds of creative people in all sorts of social settings, and connect them with all kinds of problems, so that we or they can find answers, instead of waiting for other people to come up with solutions for us."

"We want to have a platform where people with great ideas can get the push that they needed to actually enact the ideas for the betterment of society," says Rothbart. "That's the big picture. I think we'll be doing Homeless Homes for a long time because of how it's generated its own momentum, but it's just an idea. It's a proof of concept. Put creative people together with funding and community, and problems should be able to be efficiently solved."

Whether you want to volunteer your time, donate food or contribute cash, here are a few of the organisations that need your help to help those in ...
Lifestyle
1 year ago

"I definitely think understandings have changed from Covid, and I hope it continues," says Gibson. "I hope it makes a permanent difference in showing us that we're more connected than we thought we were. I hope we continue to understand the importance of togetherness, as opposed to this idea of individuals fighting it out on their own. It's our responsibility to keep what we've learnt alive and to keep thinking about it, and to avoid getting overwhelmed by looking at the bigger picture too much."

"One important point is that it only takes small steps to make a difference," the team say. "We started this project without knowing much about it at all, but we made a commitment to make 100 jackets and now we're getting close to 250 done in a very short space of time, and windows and doorways opening to possibilities we could never have imagined.

"But it came from one discussion. Everybody has the potential to change the environment that they live in, and it only takes small steps. People make a difference and it can be in very small way. One jacket for one person could make a huge difference."

Rothbart and Gibson are issuing a call to action for people to get involved. They encourage creatives to get in touch with them about collaborations — anyone with an idea is welcome to reach out.

If you would like to purchase a Homeless Home to distribute: each jacket costs R389, but any contribution will go towards getting jackets where they are needed. Make-Good is also able to fill larger orders.

To donate via crowdfunding visit backabuddy.co.za

Victor Mpofu lost his hospitality job during lockdown, but now helps feed those who need it most

It was the innocence in their eyes, the glowing smiles and knowing their tummies are full when they go to bed at night. This was the driving force ...
News
1 year ago

Covid-19 won't be over until everyone has vaccine access, says Nomzamo Mbatha

The actress has joined forces with the Cotton On Foundation and Unicef to help make vaccine equity a reality.
Lifestyle
1 year ago

Chefs with Compassion have served up quality meals to 62,000 people in just eight weeks, writes Arnold Tanzer.
Lifestyle
2 years ago