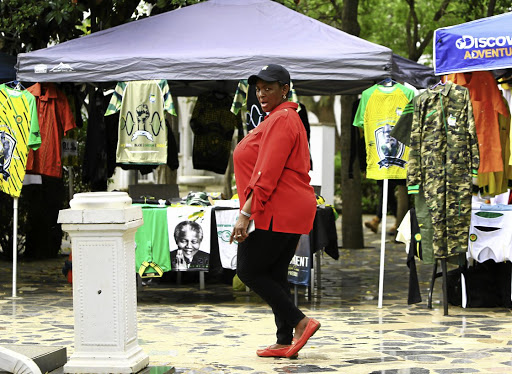 President of the ANC Women's League Bathabile Dlamini might not make it into Cyril Ramaphosa's new cabinet.
Image: Esa Alexander

Deputy President David Mabuza could be a surprise omission and women's minister Bathabile Dlamini might be axed from President Cyril Ramaphosa's leaner, restructured cabinet. The president will announce his new cabinet either on Saturday after his inauguration or on Sunday.

Dlamini's exclusion would send shock waves through ANC circles as she holds the powerful position of ANC Women's League president. The league will meet today to discuss deployments and formalise its position that 50% of the executive must be women.

A source close to Ramaphosa said he was willing to risk retribution from the women's league and other structures that support Dlamini, but has made up his mind that she cannot be part of his new cabinet.

Ramaphosa will meet the women's league today, when he is expected to give it an assurance that women will be in the majority in his cabinet, but make no commitment about Dlamini's fate.

"He will say to the women's league, are you fighting for all women or are you fighting for an individual? He's going to show them that the majority of his cabinet will be women," said the source, who sits in the ANC national working committee and has intimate knowledge of discussions about the new cabinet.

Other influential insiders in the president's inner circle said he is adamant the women's ministry must remain, however.

Those who are assured a spot in Ramaphosa's cabinet include fresh faces such as David Masondo, Ronald Lamola and Zizi Kodwa. ANC elections head Fikile Mbalula is also set for a return to the cabinet, this time as human settlements minister.

Contacted yesterday, Dlamini said she would not comment on her possible axing from the cabinet.

"I will do what the ANC says I must do. I don't want to speak further than this because the feeling is when I respond I am arrogant and defensive," she said to the Sunday Times.

She confirmed that the women's league is expected to meet today to discuss gender parity in the cabinet.

"We are going to be talking to the officials on Sunday after our meeting," said Dlamini.

Dlamini took a swipe at the ANC for how it has handled the deployment of premiers. She said discussions about women empowerment and development take place in the party "as if men are natural leaders". The criteria for leadership, she said, do not accommodate women.

It is a “disappointment” and “clearly a step backwards” that the ANC disregarded its own internal policy in appointing five male and only two female ...
Politics
3 years ago

"The president is the leader of the ANC and fortunately in the NEC [national executive committee meeting on Monday] he was not hard. He ended up summarising the meeting in favour of women," Dlamini said.

Five of the premier candidates announced by the ANC on Monday are men and two are women. There is still wrangling over the candidate for the eighth province held by the ANC, the North West, with a hard push for it to be a woman.

It is understood that the women's league was adamant that current incumbent Job Mokgoro cannot stay on as North West premier. It suggested Pinky Moloi instead.

The NEC rejected her because of her poor track record as mayor of Dr Kenneth Kaunda district municipality. This week the province's leaders met to find a female candidate for premier.

Ramaphosa's spokesperson, Khusela Diko, said: "The president is unequivocal in his resolve to ensure that women find concrete expression in positions of leadership and responsibility, not only within the executive but the state as a whole, as well as in the private sector."

Meanwhile, the Sunday Times has learnt from multiple sources in and outside of the government that a deal is being brokered that could result in Mabuza moving to Luthuli House as the party's highest-ranking full-time functionary, with ANC treasurer-general Paul Mashatile taking his place in the Union Buildings. The top-secret deal is said to be brokered by Mashatile, aided by Nkenke Kekana, chair of the NEC subcommittee on communications.

Mashatile had not responded to questions at the time of going to press. Kekana was unavailable for comment.

Those with intimate knowledge of the matter said Mabuza was extremely reluctant to go back to the Union Buildings, preferring to rather consolidate his power base in the ANC, especially in his home province of Mpumalanga. They also cited health concerns as a reason he prefers to operate from ANC headquarters.

ANC elections head Fikile Mbalula is expected to deliver an analysis of the party's performance at the polls at a meeting of the party's national ...
News
3 years ago

Others said this was unfounded speculation intended to influence the composition of Ramaphosa's executive. A long-serving NEC member told the Sunday Times, on condition of anonymity, that he had heard about Mabuza's intention not to go back to the Union Buildings and confronted a senior party leader close to the deputy president about this.

"He said there is no substance to it. All I know is that he [Mabuza] was worried about the integrity commission report so he did not want to compromise the president," said the party leader.

Another NEC member with close ties to the president said this could be a ploy by Mabuza and Mashatile to take over the presidency in 2022. "The third way that they presented before Nasrec has not died. They feel they can still take over the presidency. They are just getting into a battle they won't win. The high levels of confidence in no 1 [Ramaphosa] will make it impossible to remove him at an ANC conference."

Two more sources in the NEC said they were aware that Mabuza did not want to return to the cabinet, citing ill-health and a desire to "strengthen Luthuli House".

This comes on the back of the ANC integrity committee recommending that Mabuza should not serve in parliament. Another source said Mabuza had long wanted to leave the Union Buildings but wanted to do so on his own terms.

Mabuza's spokesperson, Thami Ngwenya, said he could not comment on ANC matters.

Ramaphosa is under pressure to pick a leaner executive, but one that will be representative of all provinces and include younger people. He will also pick fewer deputy ministers.

President Cyril Ramaphosa is establishing a unit in the presidency which he hopes will improve policy development and coordination.
Politics
3 years ago

An insider said Lamola was initially earmarked for the justice portfolio but there were fears he would not command the respect of SA's judges, and he is now being considered for rural development & land affairs. Energy minister Jeff Radebe looks set for a return to the justice ministry, and Jackson Mthembu is likely to be deployed to communications.

The highly respected Masondo could take over one of the key ministries in the economic cluster, but this would depend on whether the party is willing to lose him as head of its political school. Kodwa, who is head of the presidency at Luthuli House, and Mbalula, are a shoo-in for the cabinet. A source said the plan was for them to keep their respective positions at Luthuli House on a part-time basis. The president is considering merging the departments of sports and arts & culture and Kodwa will become either minister or deputy there.

The Sunday Times understands that Thandi Modise, who was chair of the National Council of Provinces, will get the nod for National Assembly speaker. The dilemma for Ramaphosa and the ANC leadership, however, is what to do with Baleka Mbete, who is returning to parliament.

"The president was hoping [Mbete] would resign and request an ambassadorial posting, but she hasn't, so that's a problem," said the insider.

Cosatu, too, has begun formalising its position on the executive. General secretary Bheki Ntshalintshali said: "There should be a criteria on those who don't deserve to be in cabinet … if the integrity committee says you are not suitable, you should not serve."

ANC Western Cape elections chief Ebrahim Rasool has become the latest party heavyweight to lash out at secretary-general Ace Magashule, saying he had ...
News
3 years ago

ANC secretary-general Ace Magashule says "dark forces" in the ruling party are hellbent on distracting from the struggle for economic freedom and the ...
News
3 years ago

The ANC in the Western Cape has postponed next month's provincial electoral conference as deep divisions in its leadership emerged this week.
News
3 years ago