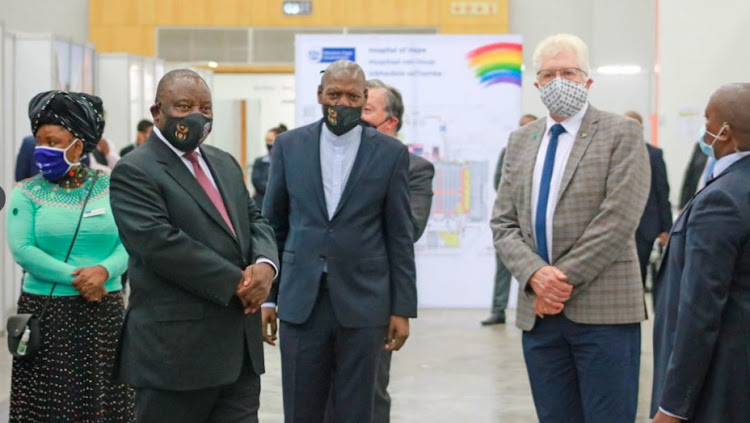 Top ANC ministers are to be deployed to the Western Cape in what DA insiders fear is an ANC attempt to use the Covid-19 crisis to muscle in on SA's only opposition-led province.

Among the deployed ministers, whose duties in the Western Cape have not been spelt out in detail, are lockdown big-hitters police minister Bheki Cele and trade, industry & competition minister Ebrahim Patel.

The government insists the surprise move is meant to bolster the battle against Covid-19 in the province, where nearly two-thirds of SA's coronavirus deaths have occurred.

The province's death toll makes it the standout exception to SA's so-far successful fight against the pandemic. Of the 60 Covid-19 deaths in SA on Friday, the Western Cape accounted for 53.

SA's Covid-9 death toll climbed to 952 on Saturday, an increase of 44 deaths in the past 24-hour cycle.
News
2 years ago

The national death toll is 908.

Western Cape premier Alan Winde, who spoke to President Cyril Ramaphosa during his visit to the province on Friday, downplayed talk of an ulterior political motive, but stressed the importance of "consultation" with the provincial government.

However, DA insiders this week said the central government's intervention smacks of a "coup" attempt, which minister in the presidency Jackson Mthembu denied. He confirmed, however, that the ministers will be sent, but said there is nothing political about the move. The decision to send ministers to Covid-19 hotspots was taken by the National Coronavirus Command Council and endorsed by the cabinet.

The same will be done with all provinces that have hotspots, he said.

‘Judge granted relief where it was not sought’

The state will appeal this week’s North Gauteng High Court judgment on the grounds that judge Norman Davis granted relief which was not sought, thus ...
News
2 years ago

He could not give details about what the ministers will do, beyond saying they will be "co-ordinating plans".

The move has startled some senior figures in the Western Cape provincial government as this drastic step was not taken in other provinces where Covid-19 infection rates are rapidly rising. They view the deployment as an attempt to micromanage them.

The Sunday Times has seen a document prepared by the Western Cape provincial government that names the five ministers and two deputy ministers to be deployed.

By Friday night, the Western Cape accounted for 66% of the country's active coronavirus cases, with 28,807 infections.

President Cyril Ramaphosa has expressed his grave concern for the Covid-19 crisis unfolding in the Western Cape which has, by a long mile, the the ...
Politics
2 years ago

'Cost not the issue, saving lives is': Ramaphosa pumps R3bn into Covid-19 battle in Western Cape

Never mind the cost, saving lives is what matters.
Politics
2 years ago

A well-placed official in the provincial government said the deployment of the ministers has caused unease as the province was not consulted on the matter. The top official said the role of the Ramaphosa intervention team had also not been spelt out to them.

"There was never consultation with our premier. It's going to be a big bone of contention but I think it's going to go through.

"Every provincial MEC has been asked to submit which region they want to work in. to check and monitor the implementation of the hotspot plan in these specific districts that have been identified by the president," said the insider.

"It seems there is a coup d'état from national to administratively start taking over certain aspects of the Western Cape by neutralising the provincial government."

The insider said the fear is that the Covid-19 crisis is being used by national government to score political points with Western Cape voters ahead of the local government elections scheduled for next year.

The source said directors-general of other national departments have also begun making regular and direct contact with Western Cape officials, usually not the norm.

President Cyril Ramaphosa is on Friday visiting the Western Cape where he will assess the province's Covid-19 response.
News
2 years ago

Winde yesterday confirmed the deployment of the ministers. He said he did not raise the matter when he had a brief one-on-one meeting with Ramaphosa on Friday.

"We didn't actually talk about that [the mandate of the ministers], so I am not too sure. Obviously, I would hope that kind of consultation happens before it actually gets deployed. And who gets deployed where and for what reason," he said.

The premier said they will be keenly watching to see if cabinet ministers are deployed to other provinces with higher coronavirus infections, such as Gauteng and the Eastern Cape, whose main metros have been identified as hotspots.

"In our province, what we have said is that we will also have our MECs and our heads of departments aligned to the hotspots," said Winde. He said the original hotspots plan was to have provincial heads of department deployed to those areas.

Regarding suspicions raised by some of his colleagues, Winde said he did not want to politicise the management of the virus.

"I have not brought politics into any of the ways that I have approached this, I don't bring it into any of those spaces. Fighting this virus is not a political game, this is very serious stuff," he said.

The document showed that Patel and Magadzi are due to be deployed to the Tygerberg region, including areas such as Mitchells Plain and Khayelitsha, along with provincial cultural affairs MEC Anroux Marais. Tygerberg Hospital is under strain due to coronavirus patient admissions and an increasing number of staff contracting the virus. 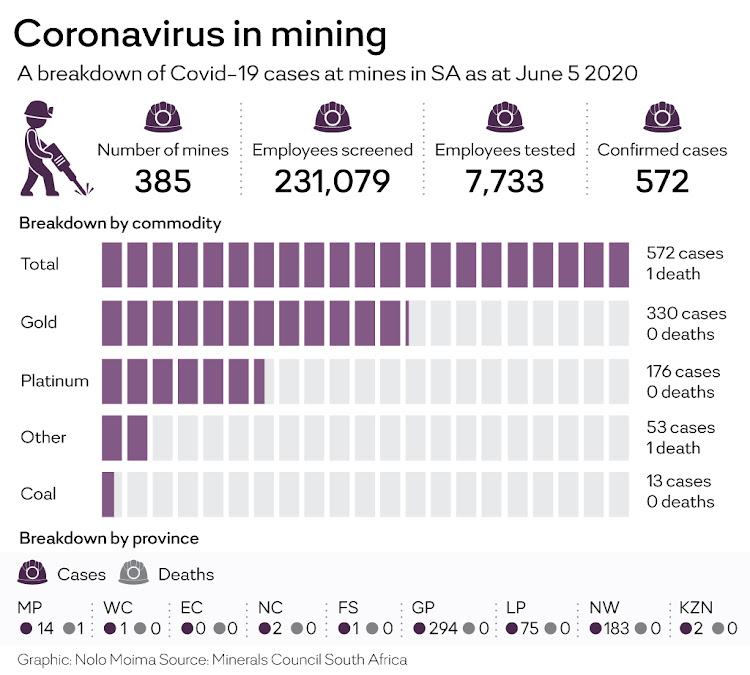 This is what statistics on Covid-19 cases in South African mines look like at present.
Image: Nolo Moima

Cele is being dispatched to the Central Karoo region together with provincial education MEC Debbie Schafer.

Mbalula is being deployed along the Garden Route, with human settlements MEC Tertuis Simmers. Creecy and finance MEC David Maynier are due to co-manage the Overberg region.

Gordhan is going to the west coast region, while deputy defence minister Makwetla and agriculture MEC Ivan Meyer will handle matters in the Cape winelands.

Presidential spokesperson Khusela Diko told the Sunday Times the president's visit to the Western Cape followed similar visits to Gauteng, the Eastern Cape and KwaZulu-Natal, which allowed him to intimately study the challenges they were facing.

"Provincial visits are not just a means for the president to receive reports but allow the president to identify with and provide reassurance to the leadership and the frontline in places where life has to continue in the presence of the coronavirus. It would be inappropriate for the president to consider certain places in the country to be no-go areas for him personally while citizens and our disaster management authorities are expected to continue life and work in challenging conditions."

Sources said the deployment of Western Cape MECs was tentative and would be finalised in due course.

Mthembu said the government will send ministers to all hotspots, metros and districts. He also said that "the Western Cape government was consulted when the president met the premier and his executive. That was part of consultation."

The country's Covid-19 infections have increased by 2,642 in 24 hours with the national death toll confirmed to be 908 on Friday.
News
2 years ago

Deputy President David Mabuza says the government has had to take ‘tough’ decisions to save lives during the Covid-19 pandemic.
Politics
2 years ago

Health minister Dr Zweli Mkhize voiced concern on Friday that 80% of the country's health-care workers who had contracted Covid-19 were based in the ...
News
2 years ago

Wear masks in public says WHO, in update of Covid-19 advice

The World Health Organisation (WHO) updated its guidance on Friday to recommend that governments ask everyone to wear fabric face masks in public ...
Lifestyle
2 years ago