No room to relax but signs of pandemic easing raise hopes 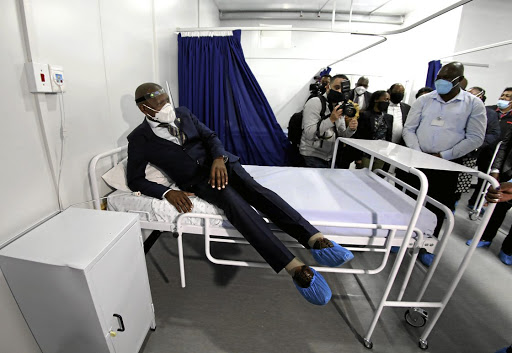 Health minister Zweli Mkhize tests a mattress in one of the newly built Covid-19 wards at Clairwood Hospital in Durban. Mkhize visited urban and rural hospitals in KwaZulu-Natal to check the state of readiness as the pandemic approaches its expected peak in the province.
Image: Sandile Ndlovu

SA is finally seeing a glimmer of light at the end of the Covid-19 tunnel.

A steady decline in the infection rate and other critical indicators have raised hopes that the worst of the pandemic's first wave is over and that a relaxation of lockdown regulations could come as early as this week, after Tuesday's meeting of the National Coronavirus Command Council (NCCC).

President Cyril Ramaphosa is expected to address the nation no later than Saturday, when the state of disaster he declared in March is due to expire.

Even as SA passed the grim milestone of 10,000 deaths last night, experts said there are strong signs that the Western Cape, Gauteng and the Eastern Cape have seen their surge.

They warned, however, that KwaZulu-Natal has yet to reach its peak, and professor Salim Abdool Karim, head of health minister Zweli Mkhize's advisory committee on the outbreak, said he is "very worried" about his home province.

Khayelitsha was the worst-hit area in SA when Covid-19 community transmission took hold, but less than five months after its first case the country’s ...
News
9 months ago

"If the epidemic really takes off in KZN like what we saw in Gauteng, the number of cases is going to start going up. Everything is dependent on what happens in KZN this week," he said.

The most dramatic sign that SA is over the worst is the number of daily infections, which has almost halved since peaking at 13,944 on July 24. And the feared overwhelming of medical facilities, which the lockdown was designed to prevent, has not occurred.

The Nasrec field hospital in Gauteng is only half full, a field hospital in Cape Town is being dismantled and shipped to the Eastern Cape, and KwaZulu-Natal hospitals should be able to cope, Mkhize said this week.

Experts are crediting SA's strict and early lockdown for the declining infection rate. In another positive sign, the recovery rate rose above 70% this week, helped by the use of dexamethasone, which has reduced intensive care deaths by a quarter since it was introduced on June 16.

He warned of the possibility of a second wave, however, and urged South Africans to stay on guard.

"Whilst we are cautiously optimistic, it is still too early for us to make definite conclusions regarding the observed decline. We need to continue to track all these indicators and ensure that our testing capacity reflects a realistic picture of our epidemiological status," he said.

Hinting at a possible relaxation of lockdown regulations, Mkhize said: "We will table recommendations to the [NCCC]. Next week we should be able to get some guidance from the NCCC and the president on the next steps."

Another ministerial advisory committee member, professor Shabir Madhi of Wits University, said Covid-19 is "still on an upward trajectory" in KwaZulu-Natal, the Free State, Limpopo, Mpumalanga and possibly the Northern Cape. But in the Western Cape and Gauteng "we have reason to be optimistic ... at least for this wave".

Professor Debbie Bradshaw, chief specialist scientist at the South African Medical Research Council, said the latest "excess deaths" report she co-authored "is indicating that in addition to the peak having been reached in the Western Cape, it has likely been reached in Gauteng and the Eastern Cape as well". 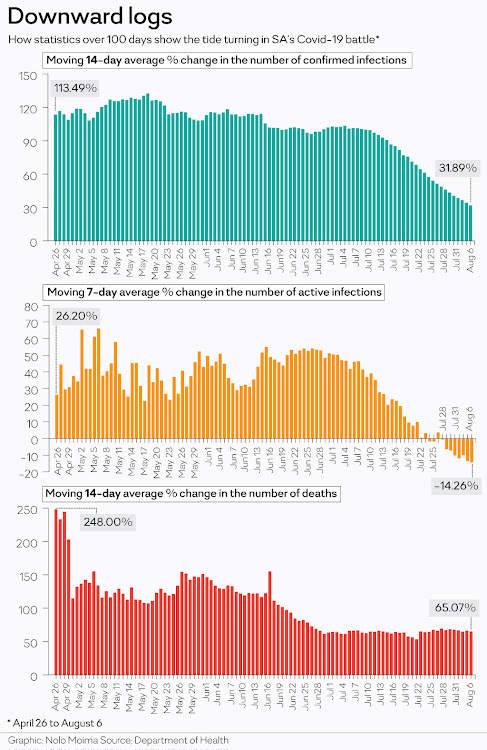 With the infection rate slowing nationally and the number of active Covid-19 cases in the past three weeks falling 20% below their peak, social scientists and economists are turning their attention to the fallout from the epidemic.

Professor Sarah Mosoetsa, head of the National Institute for the Humanities and Social Sciences, said there will be long-term aftershocks in the poorest communities. Research by her team in five townships - Soweto, Alexandra, Diepsloot, Khayelitsha and Umlazi - found that 42% of households had no income during lockdown.

Sizwe Pamla of trade union federation Cosatu said the economy has paid a "massive price" for the lockdown. "We are going to have so many people unemployed and they will not be able to service their debts. We may see a run on pension and provident funds because people will be desperate," he said.

Political economist Daniel Silke said SA will emerge from lockdown into an economic wasteland that will take years to regenerate, and economist Dawie Roodt likened the landscape to the Lebanese capital Beirut, part of which was flattened this week by a massive ammonium nitrate explosion.

"On an individual level, many millions of people will be without jobs. We will see a surge in poverty, hunger and hardship. We will see thousands of businesses closing down because they are bankrupt," he said.

IFP founder and former leader Mangosuthu Buthelezi has become the latest political figure to test positive for the coronavirus.
News
9 months ago

Council for Scientific and Industrial Research senior researcher Ridhwaan Suliman, who is tracking Covid-19 in his personal capacity, said the rate of infection is stabilising and the steady positivity rate in tests over the past three weeks is encouraging.

However, it is still high "and we're not out of the woods until we increase testing, significantly reduce the positivity rate and gain a more informed understanding of where the virus is spreading".

Suliman said the number of recoveries is increasing, but so are mortalities. "Deaths lag cases by about three weeks, and while still increasing, hopefully this will soon start to follow the cases trajectory and level off. There is always the risk of continuous outbreaks in clusters and spread in hotspots, so that needs to be managed," he said.

Abdool Karim said it is too early to say SA has gained the upper hand over Covid-19. "Our hospital admissions are coming down. Our cases are coming down, so it's pretty compelling that actually we now are on the downward slope," he said. "But it could change any minute. It is a promising trend but too early to make any firm conclusion. You can't become complacent. You can't stop your prevention. The moment you stop, this thing comes back."

Abdool Karim said it is difficult to decide whether to reduce the lockdown alert level. "It's difficult to make any call at this time because we are not yet sure that this downward trend is firm," he said.

"We need at least another week or two of information before we can tell for sure. Most of that information will have to come from KwaZulu-Natal."

Madhi, who is in charge of SA's Covid-19 vaccine programme, said optimism in Gauteng and the Western Cape is augmented by the fact that "these two make up a large portion of the population and have areas of high density", so this is where "the virus causes the most havoc".

He said Gauteng has peaked but "remains at a high level" with high rates of hospitalisation. "We are not over the worst but there are promising signs and our health-care facilities seem not to be completely overwhelmed."

However, "by no stretch are we anywhere close to the end of this outbreak, let alone subsequent outbreaks. We are going to have other outbreaks and the big question is whether they will be greater or lesser compared to the first."

Suliman said even though testing had declined - down from 48,000 a day last month to 33,000 - the steady positivity rate confirmed that new infections have stabilised at about 24%; in other words a positive case for every four or so tests conducted.

'It has been a challenging time': Women working on Covid-19 frontline

As the pressure on medical facilities drops in the Western Cape, Médecins Sans Frontières (MSF) has begun decommissioning its 60-bed field hospital ...
News
9 months ago

'There is not a day that we are quiet': funeral parlours on soaring death rate

The surge in Covid-19 deaths has Gauteng’s state mortuaries and private funeral parlours under pressure as they battle to process the dead.
News
9 months ago
Next Article