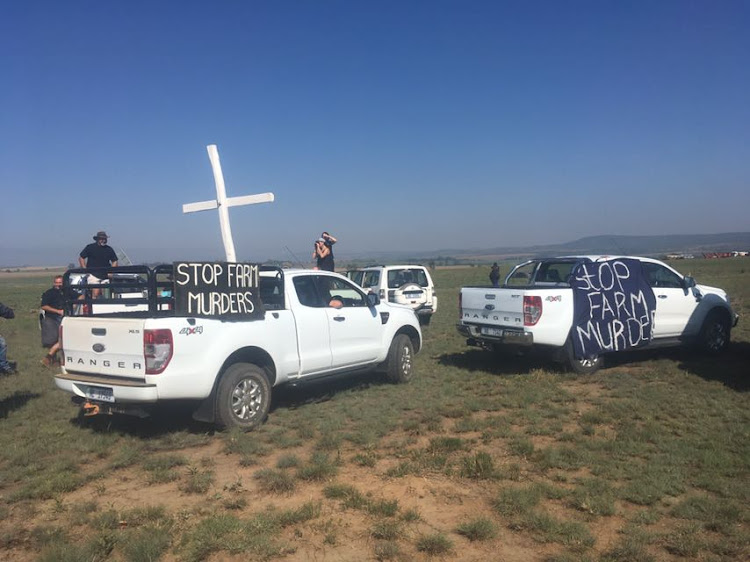 Vegetable farmer‚ Bokkie Potgieter‚ was found hacked to death in his bakkie near his Vryheid farm on Monday as thousands across South Africa marched to raise awareness about the scourge of crime affecting those living and working the country's farms.
Image: Angus Braithwaite

A smallscale farmer was murdered on Monday as thousands across South Africa marched to raise awareness about the scourge of crime affecting those living and working the country's farms‚ his neighbour confirmed.

Vegetable farmer‚ Bokkie Potgieter‚ believed to be approximately 70 years old‚ was found hacked to death in his bakkie near his Vryheid farm in KwaZulu-Natal on Monday.

His alleged killer was killed by neighbouring farm workers after he crashed the bakkie into a pole. Potgieter's body was found inside the vehicle.

Potgieter's murder - and an attack on a farmer in Klapmuts in the Western Cape - occurred as thousands across the country donned black to raise awareness about crime affecting farmers and their workers. The second farmer was believed to have been injured durng an attack‚ but details are not yet available.

"It appears as though Bokkie caught his attacker trying to steal his bakkie. It seems as though there was a struggle and Bokkie was chopped through the face with a panga‚" he said.

Van Niekerk said that the killer then stuffed Potgieter's body into his bakkie and drove off with his (Potgieter's) feet sticking out of the window.

"He crashed into a pole near the farm. Workers from neighbouring farms who were walking to work ran to the vehicle to try and help the driver‚ thinking he was injured.

"When they got there‚ they saw Bokkie's body. The killer tried to run away but the farm workers caught and killed him."

He said Potgieter had lived alone on his farm.

Ian Cameron‚ community safety head of the civil rights organisation‚ AfriForum‚ said it was important to realise that farm workers were also affected by attacks on farms.

#BlackMonday the biggest protest ever against farm murders: Afriforum

Thousands of people across the country took to the streets on Monday to take part in what civic group Afriforum described as the biggest protest ever ...
News
4 years ago

"It's clear that what affects farmers also affects their workers. They are just as fed up with crime as farmers.

"Their anger is evident with what happened to Potgieter today (Monday). Everyone has had enough with the attacks on South Africa's farms."

Police said they were investigating a case of murder. They did not identify the slain man. They disputed whether the incident was related to farm attacks.

The SAPS statement said a 73-year-old man was building a chicken kraal at about 10am when he was attacked.

Three people were injured this morning following a 13-vehicle collision on the N4‚ approximately 5km outside of Middleburg in Mpumalanga‚ paramedics ...
News
4 years ago

A University of the Witwatersrand lecturer was among hundreds of motorists who were left frustrated this morning on the R82 towards Vereeniging‚ as ...
News
4 years ago

'Don't kill the hand that feeds you‚' beg KZN farmers

“Don’t kill the hand that feeds you.” That’s the plea from more than 300 KwaZulu-Natal farmers and workers‚ who joined the nationwide #BlackMonday ...
News
4 years ago

Combine harvesters‚ tractors and bakkies caused a traffic snarl along the N3 near Bergville and Estcourt in the KwaZulu-Natal midlands on Monday ...
News
4 years ago