Gauteng says it is working to fix Vaal River ecosystem, amid scathing report

Emfuleni municipality already under section 139 of the constitution 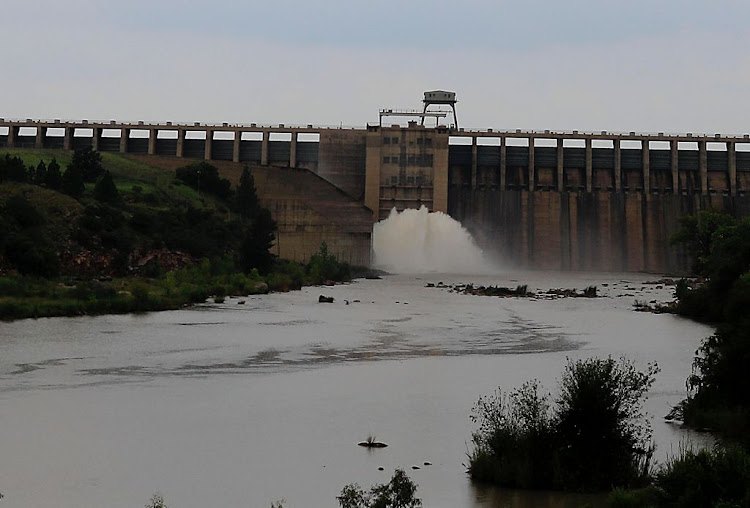 A view of the Vaal Dam on February 9 2021, near Manten Marina, after it was reported that the dam had reached 100% capacity the day before.
Image: ALON SKUY

He said MEC Lebogang Maile has noted the SA Human Rights Commission (SAHRC) report on the Vaal and will study it to formulate a detailed and comprehensive response for consideration by Gauteng’s executive council.

Ngobese said last week Maile had invoked section 139(1)(b) and 5(a) of the constitution in Emfuleni, requiring the provincial government to impose a recovery plan to ensure the municipality is able to meet its obligation. It could also lead to the dissolution of the municipality.

Currently the department of water & sanitation (DWS) is providing Emfuleni with eight sewer-unblocking trucks, costing R14m, and a further R8m will be spent by the department on civil, electrical and mechanical related services in the municipality.

An additional R50m will be spent on unblocking sewer bulk lines, he said. Furthermore, R53m has been set aside for waste collection, which will restore the weekly collection across the municipality.

The Vaal River system, on which approximately 19 million people depend for drinking water and commercial use, is polluted beyond acceptable standards.
News
1 year ago

The Gauteng department of agriculture and rural development (GDARD) is currently procuring trucks on behalf of Emfuleni for purposes of waste management and collection as part of improving service delivery and addressing the waste backlog.

Ngobese said a further R40m has been set aside for 2020/21 for the vending data, cleansing, faulty and old smart meter replacement, installation of meters in unmetered areas, repair of damaged meter boxes and illegal connection removal operations.

The SAHRC on Wednesday recommended to the cabinet that it seriously considered the national government's intervention in the running of the Emfuleni local municipality.

This is one of the recommendations contained in the SAHRC's report on its investigation into the flow of sewage into the Vaal River.

The river, which about 19 million people depend on for drinking, domestic and commercial use, is polluted beyond acceptable standards, it said.

The flow of raw sewerage on public streets, paths and into homes poses a major health hazard to people and is an obvious violation of their rights to dignity.

In September 2018, the SAHRC undertook an inspection-in-loco to test the veracity of complaints it had received from the public regarding the raw sewage polluting the Vaal and Rietspruit rivers.

Commissioner Jonas Sibanyoni said during their inquiry they found that the Vaal is now polluted beyond acceptable standards, and that the cause is the kilolitres of untreated sewage entering the Vaal because of inoperative and dilapidated wastewater treatment plants.

“The consequence is that the pollution is affecting natural ecosystems directly dependent on the water in and from the Vaal. The population of Yellowfish - peculiar to a few SA rivers such as the Vaal - are under threat of extinction on account of the change to the balance of river flora and other competing species in the river caused by pollution of the Vaal.”

The report states that livestock that consume water from the Vaal have reportedly died. “The flow of raw sewerage on public streets, paths and into homes poses a major health hazard to people and is an obvious violation of their rights to dignity as well.”

The report further states that apart from the long-term effects of pollution of the water source on life, there are concerns relating to the negative effect the pollution has had on the economy.

“Evidence was provided and accepted regarding a decrease in tourist and recreational activities on the river due to the severity of the pollution of the Vaal,” the report said.

Residents of Sharpeville are facing a serious health hazard due to a dysfunctional sewerage system and the absence of refuse collection in Emfuleni.
News
1 year ago

The report states that the Water Services Act (WSA) creates a clear responsibility on the municipality to provide water supply services and sanitation services to its customers living in formal and informal settlements.

“The municipality did not dispute this responsibility or that it had not fulfilled the responsibility, and instead conceded that these failures were attributable to its failing wastewater infrastructure.”

The report further states that in addition to not providing water supply services the Emfuleni municipality has, by not maintaining the water sanitation infrastructure, caused sewage pollution of the Vaal and in the streets and homes of people living in the area.

The SAHRC also placed the blame for the crisis at the door of the department of environment forestry and fisheries for not holding the municipality accountable.

“The pollution in fact continued for a number of years without being successfully contained.”

The commission says it was made aware that the municipality owes “billions of rands” to Rand Water for bulk water provision and that the Gauteng Provincial Treasury (GPT) and Cogta department have on numerous occasions tried to assist the municipality.

“Despite efforts made by GPT and Cogta, the municipality did not service and honour the repayment arrangements established, causing the arrangements to lapse and become nullified.”

The report further states that there is a lack of skills within the municipality to effectively manage the challenges identified more than 10 years in respect of wastewater management systems.

Even the most polluted river begins in purity somewhere. Sean Christie joins artists and engineers in tunnels under Joburg, looking for the start of ...
Opinion & Analysis
1 year ago

The commission was informed that theft and vandalism were cited as factors contributing to the ineffectiveness of wastewater management, particularly because of the damage it causes to infrastructure.

According to reports, the DWS had appointed the East Rand Water Care Company, an entity of the Ekurhuleni metro, as a specialist wastewater company to ensure that the infrastructure is made operational and wastewater pollution in the Vaal river is stopped. Unfortunately these efforts have not been enough to address the unmanageable situation that is occurring in Emfuleni.

The SAHRC recommended in the short term that the DWS or Gauteng Cogta, together with experienced wastewater management specialists and respective Treasury departments, draw up a cost-effective interim plan to urgently stop or limit the flow of sewage into the streets and homes of people living in the Emfuleni area and also into the Vaal. It recommended that:

Affected departments within national and provincial government have been given 60 days to respond to the report.

The water and sanitation department has opened three sluice gates at the Vaal Dam, and two more will be opened on Friday.
News
1 year ago

Two years since the SA Human Rights Commission inquiry into raw sewage flowing into the Vaal River, people living and working along the waterway are ...
News
1 year ago

Emfuleni Local Municipality is dysfunctional and showing no signs of improving.
News
1 year ago