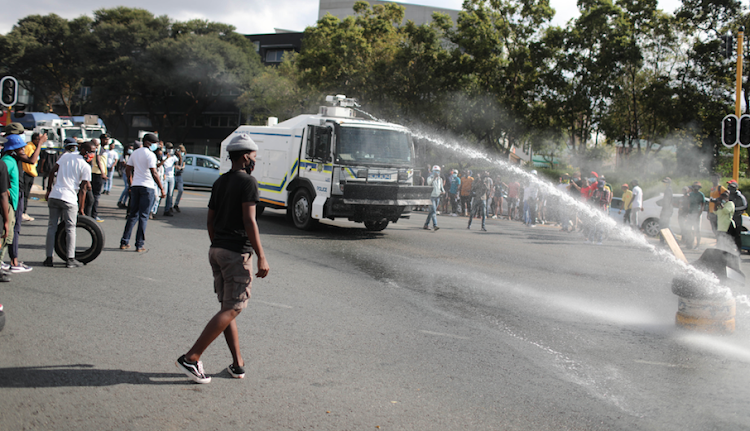 A water cannon puts out burning barricades, 15 March 2021, in Braamfontein, Johannesburg during a national student protest against the exclusion of students with historical debt and free decolonised education.
Image: Alaister Russell/The Sunday Times

The national shutdown of the country's universities is set to continue until all the demands of the SA Union of Students (Saus) are met.

The decision comes after what the union described as an unsuccessful meeting with the minister of higher education Blade Nzimande and student representative councils from the country's universities.

The Tshwane University of Technology (TUT) is not joining the shutdown as its students have yet to complete the 2020 academic year.

15 demands to be met

Last week, the union shared a list of 15 demands that were supposed to have been met by Friday.

Among its demands, it asked the minister to clear all historical debt for all students, allow registration for academically and financially deserving students, no financial and academic exclusion, and a solid plan for missing middle student funding.

“Should Minister Blade Nzimande fail to respond positively to the list of demands, SRCs have given Saus a clear mandate to engage with Savetsa (union representing TVET colleges) and all student political formations in preparation for rolling mass actions and a national shutdown of all higher education institutions from March 15,” a statement read.

“As a student union, we can no longer watch while students are turned into criminals for fighting for free education — something that was promised by the state. Free education should not be a death sentence,” the union added.

Here is what you need to know about Mthokozisi Ntumba.
News
1 year ago

Responding to the demands, Nzimande said the department was “not in a financial position” to support the tertiary institutions in clearing student debt.

Nzimande stated that the department was aware of students whose families could not keep up with fee payments and those who had been affected by the pandemic.

“However, institutions also have to remain financially sustainable to continue to operate effectively, and financial decisions are made at the level of university councils.

The department of higher education and training cannot afford to clear historic student debt, nor can it support the call for a zero percent fee ...
Politics
1 year ago

Saus rejected Nzimande's response, saying it was unsatisfactory and offered no tangible solutions.

“We see these responses as a 'check box' exercise, unsatisfactory and with no tangible solutions to address the 15 demands submitted. This is also a testament to the lack of urgency and commitment by the ministry to amicably resolve these issues without exposing students to brutal protests,” said Saus.

The union said the shutdown will continue until all the demands are met and will be based on unity and not political affiliations.

“We have already met the student political organisations and we will continue to engage them to ensure that students are united and work together as a collective,” said Saus.

“We must make it clear to the public that we are against the burning of buildings, destruction of infrastructure and violence. We call upon all students to participate in this shutdown peacefully.”

Stern warning to vice-chancellors of universities

Saus issued a stern warning to vice-chancellors of universities, saying that should they suspend or expel SRC members or students they will be dealt with.

Wits university SRC president Mpendulo Mfeka said it could take “a month” of student protests before demands are met.

“We're continuing [with protests] the rest of the week, until our demands are met. The week might not be enough to address out demands. — we might need a month,” said Mfeka.

Student shot in the leg during fees clashes in Braamfontein, SRC says

A protesting Wits student was shot in the leg during clashes with police on Monday, the university's SRC president Mpendulo Mfeka told TimesLIVE.
News
1 year ago

On social media, the hashtag #NationalShutdown topped the trending list as many weighed in on it.

In 2007 I was part of the Wits student protest led by SRC of Mbali Hlophe& Mbuyiseni Ndlozi. We ducked rubber bullets, rolled bins on the campus& closed off entrances. Fees were not my problem, I was funded by Anglo Coal but injustice has always been my problem. #NationalShutdown

The #NationalShutdown could have been prevented if we had competent leaders, both the SRC and at a parliamentary level. It is also no use beating around the bush, Blade Ndzimande MUST step down with IMMEDIATE EFFECT. Remove the root of the tree instead of attacking the branches!

The shooting in Braamfontein by the Police are getting out of hands. That on the video does not look like a rubber bullet #NationalShutdown pic.twitter.com/85fLA941om

University is for free in countries such as France, Germany, Morocco, Kenya, Egypt & many others. If the ANC stop stealing our money, there will be more than enough money to give free education to all students. So, I support the #NationalShutdown

#NationalShutdown The Police are back at it again, shooting and arresting us 😭😭

There should be a petition to remove The Minister of Higher Education and The Police. #NationalShutdown

So baffled that our police as well as our police commissioner handle the protest for education like this!
The government keeps showing us what they think of us by how they handle EVERY PRESSING MATTER. If they don’t want to listen, Shut it down til they do! #NationalShutdown ✊🏿

Wits protest: 'It was peaceful — then I was shot'

I am Aphelele Buqwana, one of the reporters who was shot at the Wits protest on Wednesday. I was reporting for the Voice of Wits radio station when I ...
News
1 year ago

Students took to the streets of Johannesburg early on Monday to continue their protests about fees as 26 universities across SA braced for a national ...
News
1 year ago

TUT students won't join protests, but only because they're still finishing the 2020 academic year

"Students are writing and they are only finishing next week Friday, so we won't be joining the forces now. But as soon as they are done then we will ...
News
1 year ago