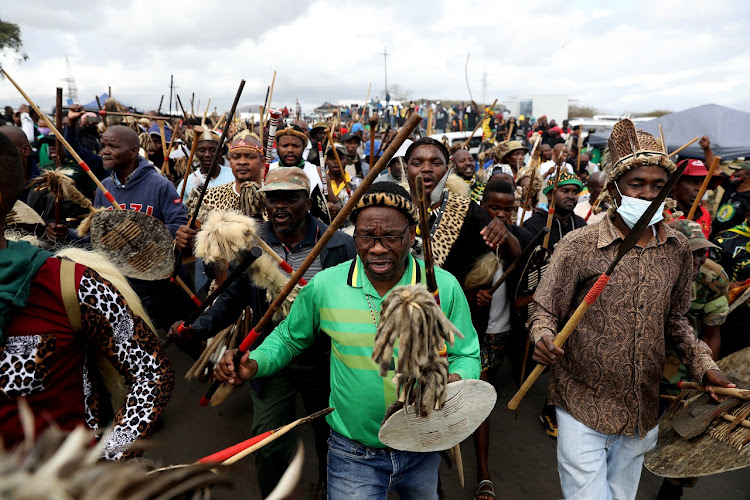 Former president Jacob Zuma's supporters chant outside his Nkandla residence at the weekend. Police have been criticised for not doing enough to enforce Covid-19 regulations at the homestead.
Image: Sandile Ndlovu

The police have been criticised for not doing enough to enforce Covid-19 regulations outside Jacob Zuma's Nkandla home at the weekend.

Hundreds of supporters flocked to the former president's homestead on Sunday in violation of the Disaster Management Act, which under adjusted alert level 4 lockdown prohibits any gatherings.

They were there to “defend” the president, after the Constitutional Court found him guilty of contempt of court and sentenced him to 15 months in jail.

Many of those in attendance, including Zuma himself, were not wearing masks and did not social distance. Zuma's spokesperson Mzwanele Manyi suggested the former president may have not worn a mask because of a “private”, unspecified health condition.

The police also reported that several in the crowd were carrying firearms, and gunshots were heard outside the residence during the gatherings.

Organisers of the superspreader event outside former president Jacob Zuma’s Nkandla home will be brought to book, the ANC said on Tuesday.
Politics
1 year ago

The police said they acted within reason, claiming they prevented possible bloodshed.

“The minister of police is convinced that if the situation in Nkandla was handled differently it could have resulted in a very violent situation,” police ministry spokesperson Lirandzu Themba told SAfm this week.

Responding to a poll by TimesLIVE, 56% said the gatherings were super-spreader events and the police did nothing about it, while 23% said the police “never do enough”.

Many also weighed in on TimesLIVE's social media pages, slamming police and protesters:

They had no intention of preventing the rally’s. Road blocks could have stopped people from getting there. They didn’t bother.

Yes did enough to avoid blood bath ,that is wisdom what police minister and police commissioner has done,but the culprits must be brought to book.

They were afraid that's all it was

It appears that Our country is getting held hostage by groups of people who just act in their own best interest and desire. Just like a bunch of unruly children. Surely policy should then be the 'parent' and get them back in line. Why does the law only apply to some, not to all

Speaking at the SAPS Covid-19 vaccination drive launch in Orlando, Gauteng, on Monday, police minister Bheki Cele applauded officers for staying calm amid insults hurled at them on Sunday.

“We had to absorb those insults and complaints. The SAPS has learnt through Marikana and we don't want to go back there,” he said.

The EFF also praised the police.

“The law does not demand of the police to exercise brutality. Rather, police must be strategic and prioritise the lives of people above cheap attempts to prove their strength and authority,” it said in a statement.

All eyes will be on the police on Wednesday, with a Constitutional Court-imposed deadline to arrest former president Jacob Zuma by midnight still in ...
News
1 year ago

"There are going to be consequences and arrests, but we just have to wait and see who is going to be arrested," says police ministry spokesperson ...
News
1 year ago

EDITORIAL | No life was lost at Zuma’s home, but a different Marikana may unfold

The police say they want to avoid loss of life, but their inaction in Nkandla may very well lead to this
Opinion & Analysis
1 year ago