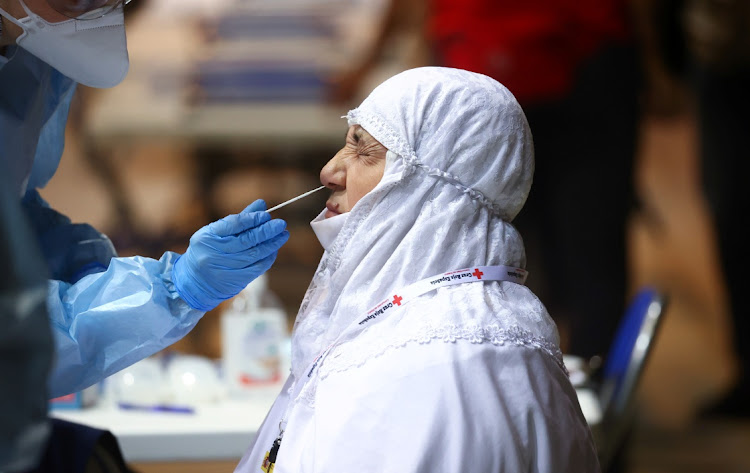 An evacuee reacts during coronavirus disease (Covid-19) tests conducted for Spanish and Afghan citizens who arrived at Torrejon airbase after evacuating from Kabul, in Torrejon de Ardoz, outside Madrid, August 19, 2021.
Image: REUTERS/Juan Medina

KwaZulu-Natal was the hardest-hit province in terms of new Covid-19 infections, figures from the National Institute for Communicable Diseases (NICD) showed on Thursday.

A decision is expected soon on whether the October school holidays will be axed.

On Thursday the department said it needed as much teaching time as possible. Department spokesperson Elijah Mhlanga told TimesLIVE it finished consultations with unions regarding the possibility of postponing the October holidays last week. A decision would come in a week or two, he said.

Schools are supposed to go on a week's break, from October 4 to 8.

The Western Cape saw a surge in Covid-19 cases after it had already hit a plateau, and its department of health has attributed this to higher mobility across the province.

According to the head of health, Dr Keith Cloete, “We noticed on our graphs that there was a surge after we had already reached a plateau. We then looked at our mobility data and it became clearer.”

The analysis team found that when residential mobility was at its highest, the numbers began to plateau.

In a bid to address increasing vaccine hesitancy, the national coronavirus command council (NCCC) has approved the vaccination of people aged between 18 and 35 from Friday, the cabinet said on Thursday.

This means that this cohort does not have to wait until September 1, which was the initial date to open up registration for them.

The City of Johannesburg is considering offering incentives to residents, particularly men, to be vaccinated against Covid-19.

This is according to Johannesburg mayor Jolidee Matongo, who told Jacaranda FM the city was concerned about the low number of men that have been vaccinated to date.

He said the city was looking at creative ways to encourage men to get the jab, such as giving away raffle tickets to win a car.

Australian authorities began doling out emergency Covid-19 vaccine supplies on Thursday in the Sydney suburbs worst hit by an outbreak of the fast-moving Delta strain, as the country reported its biggest one-day rise in Covid-19 infections.

New South Wales state premier Gladys Berejiklian said the ramp-up in inoculations in Australia's biggest city was providing some hope as the city battles its worst outbreak since the coronavirus pandemic began.

“The next few weeks will be hard, but no doubt that once we get those high vaccination rates life will feel much better, it will look much rosier,” Berejiklian told reporters in Sydney, the capital of New South Wales.

The SA Social Security Agency (Sassa) has called on R350 social relief grant recipients from the previous cycle to collect their outstanding payments or they will be forfeited.

On Wednesday, the agency said if payments are not collected by the end of the month, they will be sent back to the National Treasury to fund other “government priorities”.

“Uncollected special Covid-19 SRD grants from the previous cycle must be collected by Tuesday, August 31. Some approved applicants still need to collect their grants,” Sassa warned.

The Gauteng health department says it is impressed with the turnout of Soweto residents after it launched a mobile Covid-19 vaccination site at the Bara taxi rank on Wednesday.

This is one of the measures the province is putting in place to ensure the vaccine rollout regains its momentum after a recent slump.

Last week, premier David Makhura said the province had noted a worrying low turnout of men at vaccination centres in comparison to women.

Transnet will start operating a vaccination train from Thursday in support of the government's efforts to reach herd immunity against the Covid-19 pandemic.

The train, known as Transvaco, has state-of-the-art vaccine facilities, including ultra-low temperature vaccine fridges. The train can store up to 108,000 vials of different types of Covid-19 vaccines.

The train, designed and built by Transnet’s manufacturing division Transnet Engineering, aims to reach, and vaccinate, communities in remote parts of the country, and areas where health facilities are over-burdened.

SA  insurers are strengthening their defence against potential new waves of coronavirus infections as worse-than-expected mortality claims emerge from the ongoing pandemic.

Old Mutual Group Ltd has bulked up its Covid-19 provisions by R2bn to account for an ongoing surge and a potential fourth spike in cases, according to a statement on Wednesday. Smaller peer Momentum Metropolitan Holdings Ltd is also adding more to its reserves, while Absa Group Ltd saw first-half insurance revenue fall after setting aside provisions and paying out more claims.

Is GCIS making use of Gobbledegook or a Covid-19 communication strategy? You decide

The Government Communication and Information System on Wednesday batted away criticism that there was no communication strategy around the Covid-19 pandemic and the country's vaccination rollout.

“We have started working on the enormous machinery of government communications that exists in communities and municipalities to get those local influencers to keep encouraging and using that use of local languages to say, 'Look we want to educate'," said GCIS’s Michael Currin.

Is GCIS making use of Gobbledegook or a Covid-19 communication strategy? You decide

New Zealand's Covid-19 outbreak jumped to 21 cases on Thursday, but the authorities said the virus may not have been in the community for long as they linked its origin to a recent returnee from Sydney.

Prime Minister Jacinda Ardern and Health Chief Ashley Bloomfield told a news conference 11 new cases had been reported over the past day.

Ardern said genome sequencing revealed the current positive cases were a close match to a returnee from Sydney who arrived on a flight on August. 7.

The person tested positive to a Covid-19 on August 9 and was moved to a quarantine facility. He was later moved to a hospital on August 16.

"This is a significant development. It means now we can be fairly certain how and when the virus entered the country," Ardern said at a news conference.

"And based on timelines there are minimal, possibly one or maybe two, missing links between this returnee and cases in our current outbreak. And the period in which cases were in the community were relatively short," she said.

New Zealand had been virus-free and living without curbs until Ardern ordered a snap 3-day nationwide lockdown on Tuesday after a new case was found in the largest city Auckland.

The new cases, though still relatively small in number, have caused significant concern for authorities in the nation, which has struggled to get its population vaccinated.

Ardern warned that without nationwide curbs, New Zealand could witness the chaos seen in neighbouring Australia where the fast-spreading Delta variant has thrown half the country into lockdown.

A poor vaccination record, with just over 20% of the 5 million population inoculated against Covid-19 so far, meant the risk of exposing large number of people was higher.

‘Vaccination is a simple but profound way of promoting the common good and caring for each other, especially the most vulnerable’: Pope Francis urges people to get Covid-19 vaccines

Asian airlines are reporting high vaccination take-up rates among pilots and cabin crew as they wait for the region's tight pandemic-related border controls to be relaxed.

International travel in the Asia-Pacific region remains down about 95% from pre-pandemic levels, and concerns about the Delta variant have led to even stricter quarantines or flight caps in some places, leaving many air crew members idle and hoping for a recovery.

Qantas on Wednesday said all employees must be vaccinated, while Cathay has mandated it for pilots and cabin crew by August 31.

Qantas's Singapore-based budget offshoot Jetstar Asia said that all employees had to be vaccinated by October 1, and that nearly 100% had done so to date.

In Taiwan, China Airlines Ltd said all pilots and cabin crew had completed at least their first dose, while EVA Airways Corp said more than 90% of air crew had received both doses.

The Taiwanese carriers did not specify whether vaccinations were mandatory or voluntary.

United Airlines Inc this month became the first U.S. airline to require Covid-19 vaccinations for all domestic employees, a move that was followed by Hawaiian Airlines.

The number of confirmed coronavirus cases in Germany increased by 8,400 to 3,843,775, data from the Robert Koch Institute (RKI) for infectious diseases showed on Thursday.The reported death toll rose by 22 to 91,943, the tally showed.

No need for Covid booster jabs for now, WHO says

At a press conference, WHO chief scientist Soumya Swaminathan was asked about the need for Covid-19 boosters to increase protection against the disease. ‘We believe clearly that the data today does not indicate that boosters are needed,’ she said.