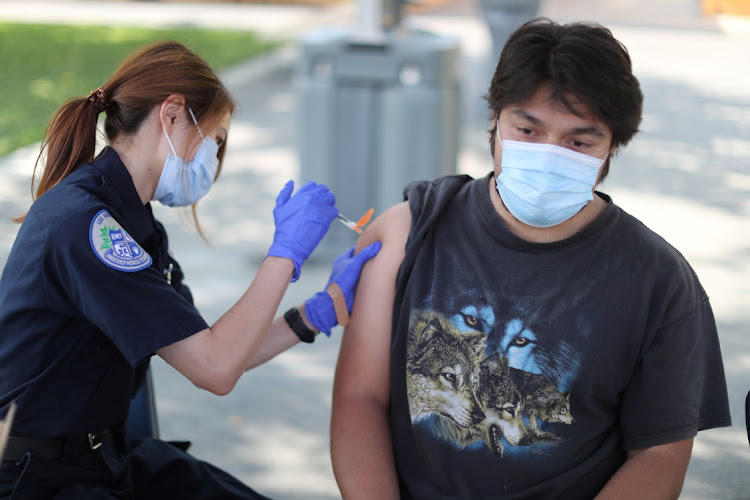 In a statement, ANC spokesperson Pule Mabe said that Dlamini, who is also an NEC member, was admitted on Tuesday.

“We wish Comrade Bathabile a speedy recovery and hope that she successfully completes her medical treatment so that she can return to office and continue serving the movement. Comrade Bathabile's courage and resolve to beat Covid-19 should inspire all of us to stand together against this pandemic,” said Mabe.

Youngsters get jabbing, with more than 60,000 vaccinated on Friday alone

More than 60,000 adults between the ages of 20 and 39 were vaccinated on Friday alone — the first day the 18-34 group was allowed to get the life-saving jab.

This was announced by Dr Nicholas Crisp, the deputy director-general of the health department, during a parliamentary committee meeting on Tuesday night.

“We’re in a strong position in terms of vaccine security. The daily vaccination has increased over the months but we would like to encourage [more] men to come forward,” Crisp said.

Youngsters get jabbing, with more than 60,000 vaccinated on Friday alone

There were 369 new Covid-19 related deaths recorded in SA in the past 24 hours, the National Institute for Communicable Diseases (NICD) said on Tuesday.

This means that SA stands on the threshold of another grim coronavirus milestone — just 47 cases short of 80,000 fatalities. To date, there have been 79,953 deaths recorded from the virus across the country.

Israel expanded its Covid-19 vaccine booster shots to those over 30 years old on Tuesday, broadening its booster campaign to fend off the coronavirus Delta variant.

A statement from the Health Ministry said its decision to lower the age of eligibility for a third dose of the Pfizer/BioNtech vaccine from 40 to 30 followed a recommendation of its advising experts and its epidemiology task-force and vaccines committee.

Boosters are administered to people who have received their second dose at least five months ago.

Court action launched by wine representative body Vinpro is being heard in the Western Cape High Court to contest the liquor ban restrictions.

Vinpro, which represents close to 2,600 SA wine producers, cellars and industry stakeholders, announced on Monday that the hearing has been set down for four days.

Vinpro MD Rico Basson said the wine industry has had to endure setbacks over the past 17 months due to the bans.

“Since the start of this pandemic we have argued that the provinces, not national government, should decide whether to impose liquor restrictions and should do so with reference to provincial circumstances, including the need to preserve capacity in trauma units in hospitals in the province,” said Basson.

As the government grapples with Covid-19 vaccine hesitancy, Limpopo health MEC Phophi Ramathuba has revealed the province is lobbying the alcohol industry to look at several proposals, including preventing unvaccinated people from buying liquor.

Ramathuba told Jacaranda FM this week her department would support any liquor outlets that wanted to refuse service to unvaccinated customers.

She said if the health department doesn't implement strict regulations on liquor , it will be forced to be deal with alcohol-induced trauma cases.

A third dose of Pfizer's Covid-19 vaccine has significantly improved protection from infection and serious illness among people aged 60 and older in Israel, compared with those who received two shots, findings published by the Health Ministry showed.

I am young and strong, why do I need to get the Covid-19 vaccine?

Despite over-18s now being eligible to get the Covid-19 vaccine,  vaccination hesitancy continues.

A recent survey by the University of Johannesburg (UJ) in collaboration with the Developmental, Capable and Ethical State research division of the Human Sciences Research Council (HSRC) suggests that vaccine acceptance across SA has picked up, but young and white South Africans remain hesitant about Covid-19 vaccines.

Dr Sheri Fanaroff of the Gauteng General Practitioners’ Collaboration (GGPC) debunked some of the myths for over-18s.

I am young and strong, why do I need to get the Covid-19 vaccine?

The Pentagon is preparing to issue updated guidance to require all US service personnel to be vaccinated after Monday's approval of the Pfizer Covid-19 vaccine by the Food and Drug Administration, Pentagon spokesman John Kirby said

The US drug regulator granted full approval to the Pfizer/BioNTech Covid-19 vaccine, making it the first to secure such Food and Drug Administration validation as health authorities struggle to win over vaccine skeptics.