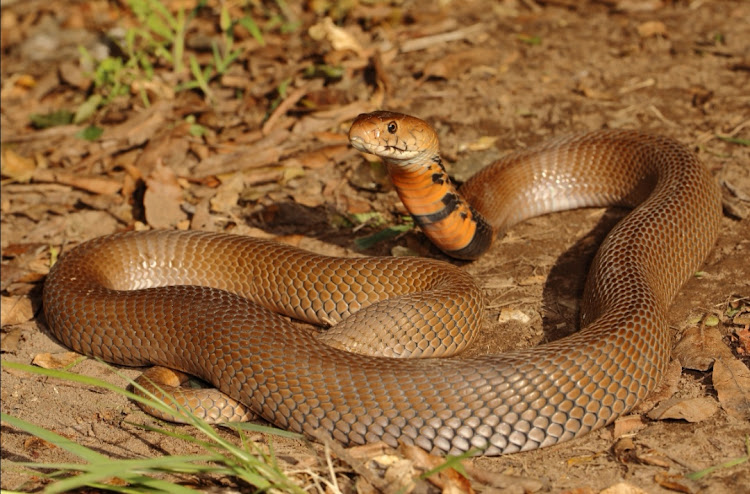 Three Mozambique spitting cobras, like the one pictured, were spotted on the same road of a Durban suburb, along with a black mamba.
Image: via Nick Evans

Sightings of four venomous snakes on the same road within two hours on Tuesday had residents of a Durban suburb shaking.

Snake rescuer Nick Evans was summoned to Westville after the poisonous reptiles were spotted on a residential road.

Evans told TimesLIVE it was an “incredible as well as unlucky day” because he did not manage to locate a single snake of the three Mozambique spitting cobras and one black mamba.

“They were quite elusive, I didn’t get to see a single one,” he said.

Evans said it was “certainly unusual for all of them to be moving at the same time, on the same road.

“It was definitely not the same snake,” he added.

It’s a jungle out there: SA wildlife pet trade industry is a ‘total free-for-all’

Evans said as the weather warms up in Durban, more snake sightings should be expected.

“It was quiet with the cold front and the rain but now it's getting hotter. Sometimes it gets too hot during the day, so they start moving in the afternoon and evening, which was the case yesterday.”

He said while Mozambique spitting cobras were not out to kill, “their bite is very dangerous. The last confirmed bite was about two years ago in Durban. They spit in dogs' eyes all the time. We had two cases yesterday.

“It's almost better they spit rather than bite. The venom in the eyes can be washed out, but the bite is far more serious.”

“I was called out to a road in Westville for a Mozambique spitting cobra by a garage entrance. I won't mention the road, in case I cause a mass exodus of residents, though they should already be used to snakes there,” he wrote.

“While en route, I got another call for a Mozambique spitting cobra — in the same road! This one had gone under a patio. I went to this one first, as it sounded more like the snake could come out at any moment.

Coil me lucky: wildlife vets save Hlengiwe the python from cancer

“My hopes weren't high, as I had tried catching cobras under this patio before, unsuccessfully. Well, I couldn't find it. So I went down to the next house. I couldn't find that one either.

“While chatting to the home owner at the second call, I got a call for another Mozambique spitting cobra — in the same road! Three in one road! I raced up the road, in impressive response time. Admittedly, I didn't have much hope. The cobra was seen by a massive amount of rocks in a cage-like structure holding up an embankment.”

Evans said he could hear the snake hissing loudly but could not see it. “The dog had been spat at, but the owners acted fast, rinsing its eyes out with water.”

As he was leaving the house, a neighbour called him after sighting a black mamba in his garden. “The mamba fled, going through the fence and into the bush.

“Four venomous snakes in one road, all within about two hours of each other. Absolutely incredible!

“And how awful was my luck? Not even a visual of a single snake! Goodness. Still, it was fun nonetheless!”

SA conservationist Dingo Dinkelman showed the world that reptiles aren't monsters by spending five nights alongside 16 of the world’s most dangerous ...
News
8 months ago

Imagine walking down the spices aisle at your local grocery store and finding one of the most unlikely shoppers casually cruising over the shelves.
News
8 months ago

In its retreat, the snake headed not to the bush but into the engine of a car.
Lifestyle
10 months ago