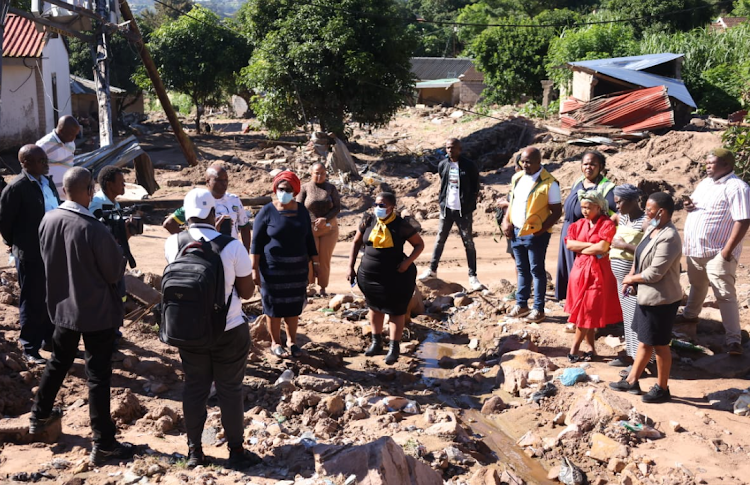 The ward councillor of Nazareth in Ethekwini has proposed that a mass burial be held for the 26 people who lost their lives in the area.
Image: Supplied/ KZN department of social development

An eThekwini ward councillor on Tuesday called for a mass funeral in an area where about 26 people died in the recent floods.

Bongani Ngubane has asked the department of social development to help arrange a mass funeral for the 26 who died in Nazareth, Pinetown.

“We would like to do a mass funeral: have one big funeral with a marquee tent because at this rate, we will end up having protests from the different areas in the ward [from people] who complain that I’m not visible to them,” Ngubane said.

He said he was yet to consult the affected families on the issue of the mass burial but insisted it was for the best.

“It is our recommendation as a council and ward committee that it would be easy for us to have one mass funeral, especially for the Majolas who lost several people. It will reduce the pressure on the council and will give me time to go and fundraise for these 3,000 people who don’t have clothes and food as we speak,” he said.

Funeral directors in KwaZulu-Natal say bureaucracy and confusion are delaying the funerals of hundreds of flood victims.
News
4 weeks ago

The tragedy that unfolded for the Majola family is one the whole community is still speaking of. All but one member of the family died when their home was swallowed by a mudslide.

"[The Majola father] went out to rescue an elderly women from being washed away by the floods but his house was washed away moments after he returned home. [The house was destroyed] by a mudslide with him, his wife and children [inside],” said Ngubane.

The only survivor from the family is was a 19-year-old man who had his own room in an outside dwelling.

Funeral directors in KwaZulu-Natal say bureaucracy and confusion are delaying the funerals of hundreds of flood victims.
News
4 weeks ago

Social development MEC Nonhlanhla Khoza was at the Nazareth Community Hall on Tuesday with Sassa officials to provide humanitarian assistance to the affected families.

Ngubane said more than 150 houses were damaged in the area, including 60 that were completely washed away, leaving hundreds homeless.

Survivors told TimesLIVE that they were still haunted by the horrors of what they went through during the devastating storm that hit the province earlier this month.

“We all come outside when it rains because we are scared that the same might happen to us,” said Hlophe.

It happened so quickly, one moment there was a house and the next it was straight as a soccer field.

Recalling those life-changing days, she recalled how “other neighbours had to come out through the windows because the mudslide kept on growing to a point where it blocked their doors.”

Ntombikayise Khumalo, another resident, said she had just run out of her house after a portion of it had collapsed when a neighbour’s wall and an electric pole fell on it.

“We were on the street trying to seek shelter from a neighbour when that house collapsed. It happened so quickly, one moment there was a house and the next it was straight as a soccer field. It’s not something you can forget,” she said.

“We are just thankful for life but we will never be the same again. Ask anyone who was affected by floods, there is no way someone can forget what happened that day. I didn’t enjoy any proper sleep in the next few days, I still get scared when I hear sudden noises,” she said.

Hlophe and Khumalo are two of several people taking temporary shelter at the local hall.

While Hlophe’s house didn't collapse, she said she was advised not to live there because of the huge cracks in it.  She had lived there with her five grandchildren, whom she has since sent to live with her sister in another area.

The eThekwini municipality has called for empty hotels and hijacked buildings owned by the state to be renovated and used to accommodate those ...
News
3 weeks ago

“We are well taken care of here: they gave us clothes, blankets and they make sure we are well fed but how can I be happy when I don’t even know if they ate anything,” she said.

Khoza announced that 196 survivors from the area would be granted the R1,980 one-off food vouchers.

She also said there would be social workers to help the survivors process their ordeals.

“We really value the work of the NGOs because they do this from the bottom of their hearts. Others don’t even have funding from the government, they take the initiative to go around and seek funding to assist those in need and they have real done a lot to make our jobs easier even,” she said.

In a video circulating on social media, Duduzane Zuma and others can be seen with shovels in hand, removing mud that slid into the home during the ...
Politics
3 weeks ago

President Cyril Ramaphosa says he is embarrassed that what is top of mind for South Africans during a time of disaster is that funds meant to help ...
Politics
3 weeks ago

The KwaZulu-Natal government has revised its estimated total cost of flood damage to approximately R17bn.
News
3 weeks ago