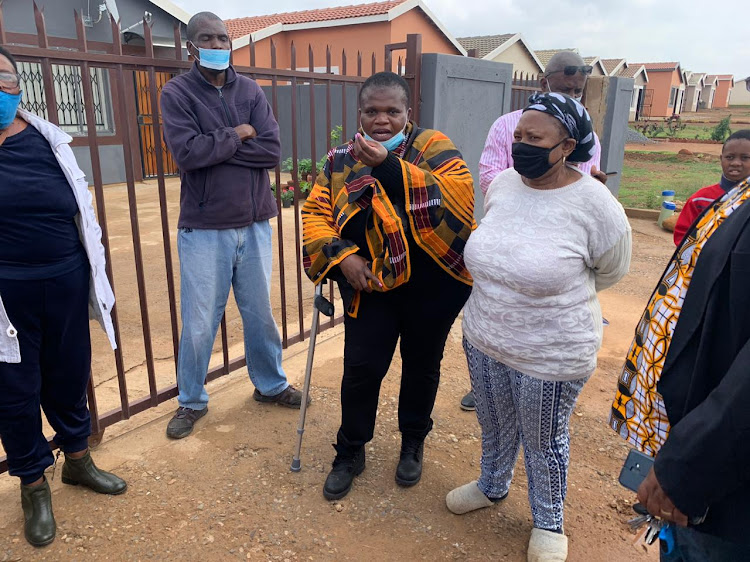 Cogta portfolio committee chair Faith Muthambi met residents of Nellmapius Ext 22 who have not had electricity since 2016 when they moved into the development.
Image: supplied

There is a shortage of senior managers, municipal public accounts committees (MPACs) are dysfunctional, there are high water and electricity losses, and no investigation and consequence management into unauthorised, irregular, fruitless and wasteful expenditure in Gauteng municipalities.

These are among the many issues parliament's portfolio committee on co-operative governance and traditional affairs (Cogta) found on the first day of its visit to the province on Tuesday. The general picture of functionality, said committee chair Faith Muthambi, was “concerning”.

Auditor-general Kimi Makwetu, in a report released in July 2020, stated that irregular expenditure by Gauteng municipalities increased from R3.2bn to R4.6bn in the most recent financial year. Makwetu said in July that Gauteng municipalities have, in general, improved in their audit outcomes — but he flagged the collapse of the Tshwane council as having hurt the province's financial accounting.

The Cogta committee is conducting a week-long visit to assess the state of municipalities and the provision of services in Gauteng. Municipalities under the spotlight are the Tshwane and Ekurhuleni metros, and the Emfuleni local municipality.

A parliamentary committee has called for heads to roll over fruitless and wasteful expenditure amounting to nearly R3bn incurred by the eThekwini ...
News
1 year ago

Regarding the high vacancy rate, Muthambi and the committee found that four out of the 11 municipal manager positions are vacant.

“However, the high vacancy rate of supporting senior manager posts is [also] a concern. In Johannesburg there is a 42% vacancy rate, Sedibeng has 50%, Lesedi and West Rand are at 33%,  and Merafong is at 42%,” she said.

Muthambi said this could be attributed to the lack of strategic direction and lack of financial prudence in those municipalities. A concern was that of the 11 municipalities, five municipal public accounts committees had not yet approved their 2019/20 annual plan.

“This undermines their critical oversight role and is reflected in the backlog in investigating unauthorised, irregular, fruitless and wasteful (UIFW) expenditure,” she said.

Another concern of the committee was that only 55% of municipalities are compliant in approving the oversight report, as per section 129 of the Municipal Finance Management Act (MFMA).

“This undermines good governance and must be rectified immediately,” Muthambi said.

“High water and electricity losses are another concern. These put pressure on the cash flow balances and contribute to poor service delivery.”

She said it was unsustainable to have water losses of R1.39bn in Johannesburg, R1.05bn in Tshwane and just over R1bn in Ekurhuleni. She said the committee had urged municipalities to deal with customers who steal water, address inaccurate billing to increase payment, and fix ageing infrastructure.

The National Union of Public Service and Allied Workers (Nupsaw), representing more than 80,000 public servants, will embark on a national day of ...
News
1 year ago

“Only Merafong has no councillors in arrears. This fosters a general culture of non-payment, as residents follow the example set by councillors,” she said.

Muthambi said government debt to municipalities required urgent attention from both the provincial and national governments if the culture of non-payment was to be overcome. According to Makwetu, Gauteng municipalities owe Eskom R3.3bn and the water board nearly R1bn.

Muthambi said the committee was concerned that in Gauteng 77% of unauthorised expenditure for the 2018/19 financial year and prior years is still to be addressed.

The committee called for the urgent completion of the investigation and implementation of consequence management against those in the wrong, and for the recovery of money where possible.

The committee on Tuesday visited Hammanskraal and Nellmapius Ext 22 where residents told the committee they have not had electricity since 2016.

The quality of drinking water has not been compromised by Vaal River pollution and sewage spills, the department of water and sanitation said on ...
News
1 year ago