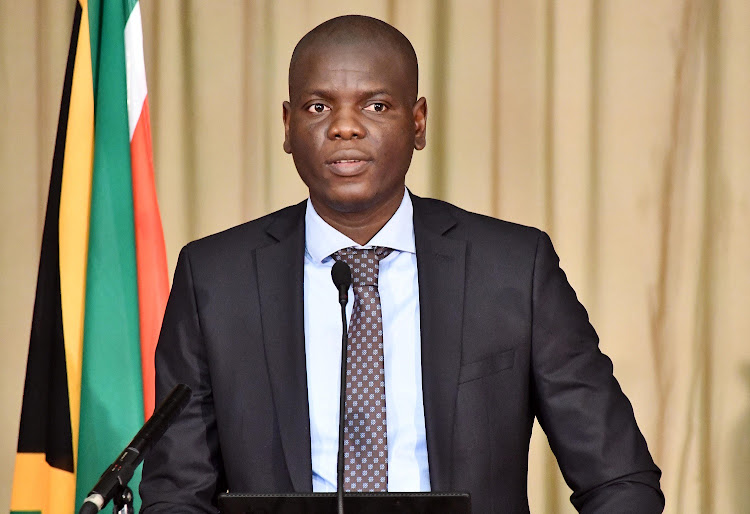 Justice and correctional services minister Ronald Lamola says the R5m defamation lawsuit brought against him by the Radical Economic Transformation (RET) President Zuma Support Group is “misconceived” and “without merit”.

Umkhonto we Sizwe Military Veterans Association spokesperson Carl Niehaus, who leads the group, filed the lawsuit in the Gauteng High Court in Johannesburg in March 2020.

The Sunday World reported that Niehaus said in his affidavit that Lamola had insulted them at an ANC event in Ivory Park in Tembisa, allegedly calling them “thieves who stole money from government”.

In court papers filed last week, Lamola hit back saying the application was “misconceived” and that the group had failed to meet the requirements for defamation.

“The speech I delivered on February 20 2020, the basis of this application, was designed to reclaim RET from those who intend to hijack its legitimate objectives for their own personal gain.

'Dear Carl, you're on your own,' Ace Magashule tells Niehaus as ANC moves to suspend him

ANC secretary-general Ace Magashule has distanced himself from statements made by one of his most loyal supporters, MKMVA spokesperson Carl Niehaus.
Politics
1 year ago

“My criticism was directed at those who have exploited the legitimate aims of RET to further their own nefarious desires — it was not about the applicants, nor was it in reference to the applicants.

Lamola said he was asked by the ANC greater Midrand zone 15 to give a keynote address at an expropriation of land without compensation workshop.

“The purpose of my speech was to warn comrades of the movement that in the furtherance of the goals of the Freedom Charter and the commitment that the ANC has made to radically transport the economic structure of our country through land redistribution.

Defamation is about the impingement of an individual’s dignity — our law does not recognise 'group' defamation or defamation on the basis of ideology.

“In any event, the application is misconceived. I am advised that defamation is about the impingement of an individual’s dignity — our law does not recognise 'group' defamation or defamation on the basis of ideology.

“Defamation is about the person and their individual self-worth.”

Lamola argued that defamation was about the “impairment of the individual dignity — not groups”.

“This is the fundamental error in the applicants' case: they have assumed that criticism on the basis of their associated beliefs axiomatically means criticism of their person. Put bluntly: to criticise believers of RET is not defamatory.

“Rather, it is free speech that is permissible in a country where the contestation of ideas is healthy and encouraged to build a vibrant society.”

Could Jacob and Julius be making plans to unleash the Pac-Man Method on South African politics?
Opinion & Analysis
1 year ago

He said the applicants failed to demonstrate that his speech was about the Gauteng RET President Zuma Support Group.

“Therefore, my criticism of the claimants of RET for dubious purposes could not have been about the applicants. However, somehow, the applicants have appropriated RET, a national policy of government, to themselves.”

Lamola said the genesis of his speech emanated from the numerous attacks on the state capture commission.

“As this court is aware, the commission was set up to uncover evidence and to point to individuals involved in a conspiracy to loot state resources and the incapacitation of crucial state institutions such the National Prosecuting Authority (NPA).

“At the time I gave the speech, there were groups and individuals who were claiming government’s efforts at eradicating corruption were an attack on RET. In particular, these individuals alleged that the cleaning up of the state was directed at those who intended to further RET.”

Jacob Zuma is being targeted by judge Zondo, claim his supporters

Anonymous sources said former president Jacob Zuma stuck to his guns and refused to testify at the state capture inquiry.
Politics
1 year ago

EDITORIAL | ANC is correct to act on Niehaus, but it shouldn’t be a one-off