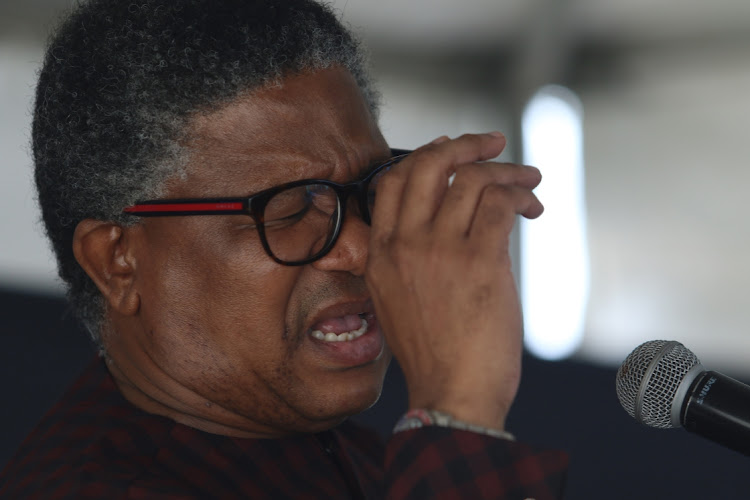 Transport minister Fikile Mbalula had a lot of us talking after his BBC interview on Thursday with the host of HARDtalk, Stephen Sackur.

He was interviewed about the recent unrest and was asked whether it was an insurrection, as declared by President Cyril Ramaphosa.

The interview was a missed opportunity by the minister to acknowledge the real issues affecting millions of South Africans. Instead he blamed the failures of the ruling party on 300 years of colonial oppression.

Here’s why that interview was a failure:

Many things are true about the elements of the recent unrest. It is true some of it had its roots in demands for the release of former president Jacob Zuma, but there were also elements of criminality.

It is also true there is deep anger among millions of unemployed youth who lack access to opportunities. With an official unemployment rate of 32.6%, according to Stats SA, the country has long been a ticking time bomb.

Transport minister Fikile Mbalula told the BBC's 'HARDtalk' on Wednesday that the recent unrest was a 'failed insurrection' by plotters who had a ...
Politics
10 months ago

The minister could have acknowledged this. Instead, he reduced the demonstrations to “attempts to undermine a democratic state” and unemployed youth as innocent bystanders “who were taken advantage of” by the instigators of the unrest.

Who loots food for the fun of it?

Downplaying the extent of the damage

Mbalula admitted the government was caught napping and did not act soon enough to avert the situation, but claimed “the ground was not fertile” for the rioters.

“For all the days they had, the plotters couldn’t achieve that result,” he said.

They couldn’t achieve the result, minister?

While the government has not conclusively quantified the extent of the damage caused by the riots, here’s what we know.

According to the presidency, which cited figures from the SA Property Owners Association (Sapoa):

Behind all the figures are 150,000 people whose jobs are at risk.

Some jobs will be recovered, but can we dismiss the possibility of more citizens joining the unemployment queues?

‘Power of the people’

In another desperate attempt to dodge accountability, the minister boasted about “the power of the people”, saying communities took a stand against the looting in solidarity with government.

What the minister didn’t acknowledge is the defence of structures came from a place of fear and scarcity. It was not motivated by an attempt to show support for a government that has repeatedly failed its people.

South Africans are angry, but burning infrastructure and businesses is something we simply cannot afford. We must be calculating in our demonstrations of anger rather than destroy the little that keeps us going.

How did the minister miss this? Or did he ignore it?

Ask any anti-looters in townships why they are against the violence and they will tell you: “If we burn these shops, where will we get employment? Where will we buy food? Where will we access resources?”

It’s about fear and survival.

Was it convenient for Mbalula to disregard these facts? It is possible.

Asked if the ANC has done enough in the 27 years it has been in power, he responded: “If South Africans did not believe in this government, there would have been an upsurge and the country would be in flames. The masses would have risen. They didn’t.”

SA is among the most unequal countries in the world and youth unemployment is at an all-time high and often reported as the highest globally.

The recent unrest is said to have been sparked by the jailing of former president Jacob Zuma, and the poor may have been taken advantage of by criminal elements and instigators who sought to advance their narrow interests, but it is worth asking: if the ANC is doing a brilliant job, why were they so easily triggered? Why were they easily influenced?

Among the many answers lie years of anger from betrayal, state capture, empty promises, inequality and poverty.

The government must stop claiming false victories and deliver on its promises.

The EFF says it reached out to Dlodlo with questions about her claims, but the answers were not forthcoming.
Politics
10 months ago

The unrest which claimed more than 200 lives was an indictment of SA society and could have been dealt with more responsibly, ANC officials Nomvula ...
Politics
10 months ago

TOM EATON | Can someone please tell us why DD is clowning around in Russia?

If Mabuza was poisoned, he would have recovered by now, so why does he keep nipping off to that country, of all places?
Opinion & Analysis
10 months ago