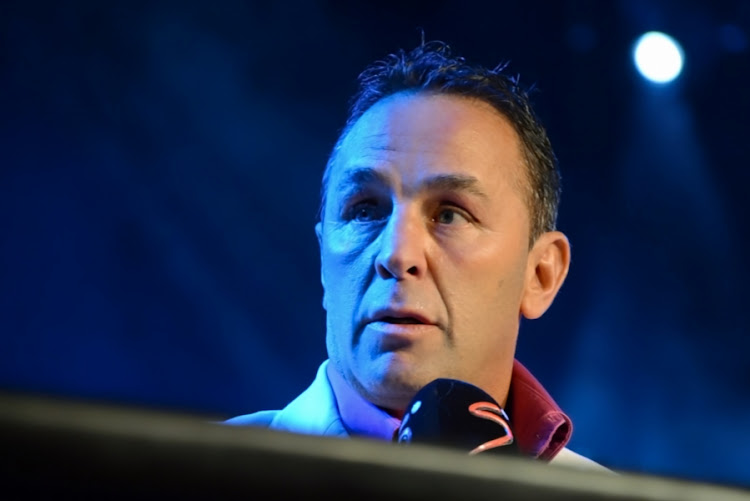 A file photo of Brian Mitchell during the a sports event in South Africa in October 2016.
Image: Wessel Oosthuizen/Gallo Images

He is one of the most decorated South African sportsmen of all time and his life story will be immortalised on stage in a play in October.

Brian Mitchell is the only South African boxer to be inducted in the Hall of Fame — he was inducted in the US in 2009 — and he retired undefeated as the WBA and IBF junior lightweight champion in 1995 .

The Road Warrior‚ the play about his life‚ is described as a rags-to-riches tale of a rebellious teenager’s journey to the Hall of Fame and it was written and directed by industry stalwart Tim Plewman.

The now 56-year-old Mitchell said the play feels like the final chapter in his life.

‘‘It is wonderful because it is almost like the final chapter in my life‚” he said.

‘‘It is wonderful journey. The public will be paying my tribute.

Floyd Mayweather and Conor McGregor traded verbal jabs as the circus-like countdown to their money-spinning superfight cranked into overdrive on the ...
Sport
4 years ago

‘‘I saw Mike Tyson do it and it was very successful. I then contacted Tim about my life.

‘‘I gave him my book and he said it was a great story to tell and he accepted to write and direct it. It is a one man show.

"I will be telling people about my life experiences from birth to where I am now.”

Born in the south of Johannesburg in 1961‚ Mitchell said boxing gave him everything he has today and he dedicated long hours to mastering his craft.

He gave 25 years of his life to the sport — 10 years in the amateur ranks and 15 as a professionals — and his dedication came at a cost.

Interestingly‚ Mitchell never fought against a white South African and he made his name in the townships — Soweto‚ Springs‚ Sebokeng and Ekurhuleni — beating the best black boxers of that era.

He defended the WBA belt he won from Panama's Alfredo Layne at Sun City in 1986 12 times.

He then won the IBF belt from Tony Lopez in a rematch in Sacramento in September 1991 after drawing their first fight in a controversial hometown decision six months earlier.

McGregor win against Mayweather would be 'dreadful' for boxing, says Horn

Australia's Jeff Horn has given Conor McGregor little chance of beating Floyd Mayweather in Saturday's super-fight and hopes the American will ...
Sport
4 years ago

The only blemish to his record came in 1982 when he was beaten by Jacob ‘‘Dancing Shoes” Morake in KwaThema‚ Springs.

But Mitchell avenged that defeat the following year with a points win for the national title.

Morake actually died after his fourth meeting with Mitchell at Sun City in November 1985.

Mitchell knocked an exhausted Morake in the 12th round and the Sowetan was rushed to Lady Dudley Hospital where he died the following day.

Mitchell‚ known as Raging Bull or Mean Machine‚ then won the WBA belt but he was forced to defend it outside the country under trying circumstances.

The WBA had suspended SA’s membership because of the then government’s Apartheid policies and the governing body’s world title fights could not be held in the country.

It is those hardship that he eventually earned him the nickname ‘‘The Road Warrior”.

‘‘When it comes to boxing‚ remember I was not allowed to defend my WBA title here at home‚” Mitchell said.

‘‘I had to travel around the globe and the reception was not good at all. Those are things I will be sharing with my fellow countrymen.

‘‘Look I will be telling people about my highs and lows — things people do not know I did after retiring as a boxer. I am very excited and proud of myself by doing this.

‘‘It has taken a lot of hard work and I have been working on this for over a year now.”

The money's on money in Mayweather vs McGregor fight

Love it or hate it, millions are going to tune in to Mayweather vs McGregor this weekend
Sport
4 years ago

Emperors Palace entertainment manager Andi Shaughnessy said The Road Warrior will run from October 26 until the 29th at Theatre of Marcellus.

‘‘It’s a multi-media presentation with footage from his greatest moments‚ music of the times‚ and even a little fancy footwork from the maestro himself‚” said Shaughnessy.

‘‘Very few of us will ever understand what it takes to be a world-class boxer‚ but The Road Warrior will offer a rare glance into the life of one of boxing’s greatest‚ making it a must-see for sports fans and theatre-lovers alike.”

Mitchell‚ who is now single and lives with girlfriend Faleen‚ has been married twice and has four children — Brian Junior (30)‚ Nathan (28)‚ Candice (26) and Damon (15) — from his two marriages.