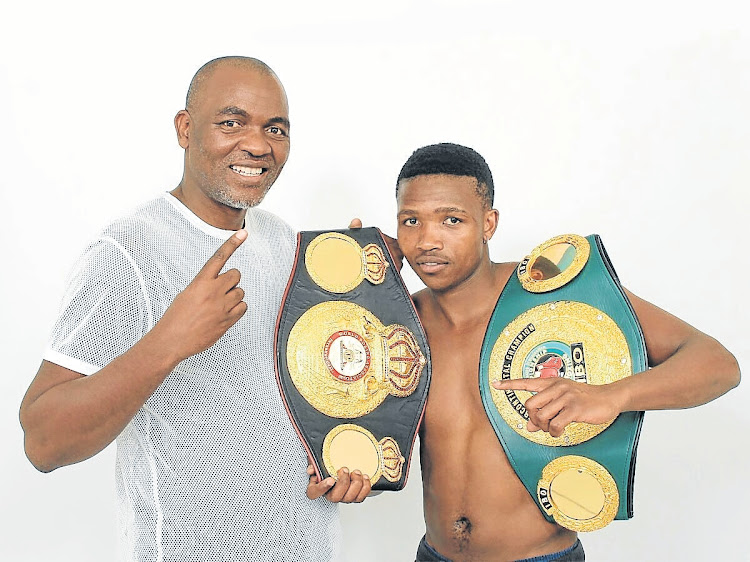 Mzuvukile Magwaca, seen here with his former manager Mla Tengimfene, will start afresh this evening when he vies for the WBF bantamweight title after getting stripped of his previous belts.
Image: Supplied

Boxer Mzuvukile "Old Bones" Magwaca's career hangs in the balance after he was shot during a robbery at home in Khayelitsha last week.

The R4 rifle bullet broke bones just above his thigh and the WBF‚ IBF Intercontinental and WBA International bantamweight champion will be operated on Wednesday at Tygerberg Hospital in the Western Cape.

Top East London boxing promoter Ayanda Matiti was emotional as he related the incident to TimesLIVE on Monday.

"You just don't know whether this is what we must expect from Cape Town where boxers are becoming victims of crime."

"Now Magwaca‚ a highly rated boxer‚ has been shot through crime also in Cape Town.

"He is one of the prominent athlete the country has.

"For someone to just force entry in his house and rob him even when he has surrendered goes to show how much people have lost humanity."

The boxer's distraught trainer Zola Koti said the damage was so severe that no one knows exactly what will happen to his career.

Koti said Magwaca parked his car and walked towards the door of the house he shares with his mother and his younger brother.

"He noticed that the burglar door was open‚" said Koti.

"He got inside the house but surprisingly his mother and younger brother were asleep.

"He was accosted by four guys who were inside the house.

"They pointed guns at him and demanded money.

"He said he told them that he did not have money.

"During that commotion‚ his mother and brother woke up.

"Those four guys then took all their cellular phones and demanded the television set which was mounted on the wall.

"He said they then told Magwaca to remove the television set‚ and that took long because it is mounted on the wall‚ so they panicked and started shooting."

Matiti said said the matter has been reported to the police.

"What will happen to his career will be determined by doctors‚" he said.

"We are almost helpless.

"They used a riffle which broke his bones.

"I must first understand what does this whole thing mean to him before I can communicate with the sanctioning bodies ( IBF and WBO) that he represents.

"Hopefully police will find the criminals and the wheels of justice must grind.

"When people visited him in hospital‚ they cried.

"This whole thing is affecting all of us emotionally. All wrong things happen to right people."

Magwaca retained his IBF Intercontinental title on points against Namibian Immanuel Naidjala in East London on December 8. He is undefeated after 23 boxing matches.

Magwaca was born in Duncan Village near East London but grew up in Khayelitsha.

He is the second professional boxer from the stable of successful yet humble Koti to be shot.

Lwando "Floyd" Molwana was shot dead in September at Marikana‚ Cape Town‚ in 2015.

Said Koti: "What is even worse is that up until today no one was arrested for killing Molwana.

"Even regarding Magwaca‚ no one has been arrested as yet.

"Luckily Magwaca is still alive to tell the story but I am not sure about his career. I am saddened by this."

Magwaca is rated No 8 in the WBO's bantamweight division and is also placed on the 10th spot by the IBF.