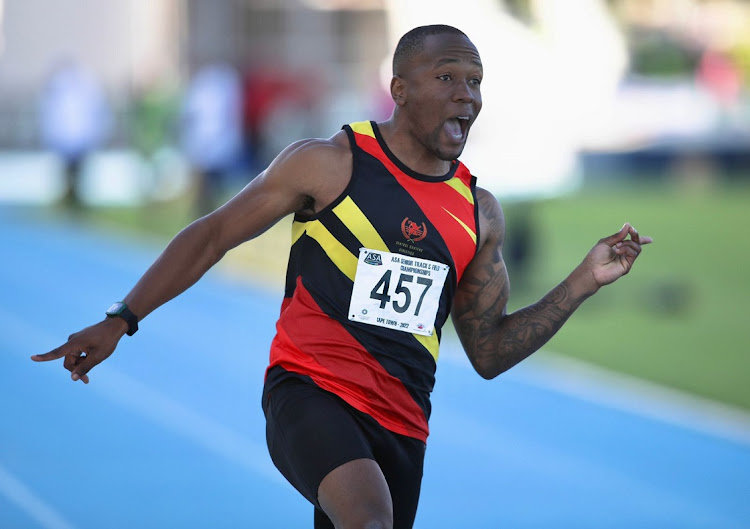 Akani Simbine won SA 100m crown No 6 in Cape Town on Thursday, but it was his most emotional by far, as he broke down in tears in a media interview soon afterwards.

Simbine, fourth at the Tokyo Olympics last year, turned to his rivals as he crossed the line in 10.31, just three-hundredths of a second in front of 17-year-old Bradley Nkoana, the SA under-18 champion. Neo Mosebi, the SA under-20 title-holder, was third in 10.34 and Henricho Bruintjies fourth in 10.40.

Simbine waved his index finger at them to show he was still the top sprinter in the country, a title he’s held since 2015, apart from 2016 when he withdrew injured.

This was a rare display for an athlete who started his career with the nickname “Mr Chill” because of his laid-back attitude.

And in the immediate wake of his triumph, after a tough few weeks during which he ran a slow 200m, failing to break 21 seconds, and then finishing second to Kenyan Ferdinand Omanyala over 100m a week ago,  he couldn’t hold off the raw emotion .

“Mentally it’s been a rough couple of weeks because everybody’s been coming at me saying, 'Akani’s gone, Akani’s gone, he’s not the same since Olympics',” said Simbine.

“I’ve worked hard for this, I’ve worked so hard to be where I am. It’s not something I’ve just been given.

If anyone wanted to assess the state of local athletics, they only had to look at the competitors organisers rolled out in Cape Town on Wednesday ...
Sport
2 months ago

“Some people respect me, some people don’t respect me but at the end of the day I’m doing something good for athletics in SA,” he added, saying he had trusted the programme of his long-time coach, Werner Prinsloo.

“No matter what they say, when it’s time to produce what I produce and that was my goal for SA champs.”

His stablemate, Carina Horn, won the women’s 100m to give their coach Prinsloo the national sprint double.

It was while Simbine was paying tribute to Prinsloo, his coach for more than a decade, that he broke down.

“Someone that’s been with me for,” he said, before sobbing and putting his hands to his face and taking several seconds to compose himself.

“For my coach it’s the biggest thing because everybody said to him he’s just a one-athlete coach and now he’s been able to prove he can make other athletes run. And for me that’s the biggest thing and I wish people could give him the respect he deserves. And now we’re going to look on to Clarence.”

Kenyan sprinter Ferdinand Omanyala dipped under 10 seconds as he downed local hero Akani Simbine in their 100m shoot-out at the fourth meet of the ...
Sport
2 months ago

Clarence Munyai, who is also part of the team under Prinsloo, competes in the 200m heats on Friday.

Dominique Scott dominated the women’s 5,000m race with a performance that left Caster Semenya in her shadow at Green Point stadium.

She had trailed Semenya and Glenrose Xaba for most of the distance, but with four laps to go Scott attacked and crossed the line unchallenged in 15 min 28.10 sec. Semenya was second in a 15:31.50 best, still well short of the 15:10.00 qualifying time required for the world championships later this year.

Semenya had tried to go with her, but she was unable to retaliate.

US-based Scott came into the race as the favourite, given her fastest best time, though Semenya had won their only other previous encounter over that distance, at the 2019 championships in Germiston.

“I wasn’t really concerned with making it a fast race, I just wanted to get the title today,” said Scott. “Obviously Caster is an amazing runner, she has a superfast deadly kick so I knew I couldn’t leave it until the last lap, not even really the last kilometre.”

Carina Horn returned after a two-year gap to snatch a narrow victory in the women’s 100m at the third meet of the grand prix series in Potchefstroom ...
Sport
2 months ago

In the women’s 100m hurdles Marioné Fourie underlined her class, easily winning her heat in 13.14 sec to establish herself as the out-and-out favourite for Friday’s final.

The day opened with the news that Wayde van Niekerk had withdrawn because of injury, and then in the opening heat the favourite in the women’s 100m, Viwe Jingqi, pulled out after tweaking her hamstring on the warm-up track.

Ruswahl Samaai was a no-show in the men’s long jump, apparently after falling ill and being unable to travel here from his training base in the US.

And if that wasn’t enough, officials messed up the placement of the hurdles in the men’s 110m race, where participants in the first heat crashed midway because the hurdles were too close. The race was re-run later.

He was stripped of his World Relays gold medal and condemned to fourth place at the Tokyo Olympics, but Akani Simbine is tackling the new season with ...
Sport
3 months ago

SA has talent: athletics meet shows there are stars waiting in the wings

On the back of a disappointing Tokyo Olympics, SA has a group of young, gifted track and field stars ready to fly
Sport
3 months ago

SA will be stripped of its world relay gold medal after one member of the 4x100m team was handed a two year and six months ban for doping.
Sport
3 months ago