With the T20 World Cup in October and November in the UAE and Oman, the Proteas are in turmoil on and off the field 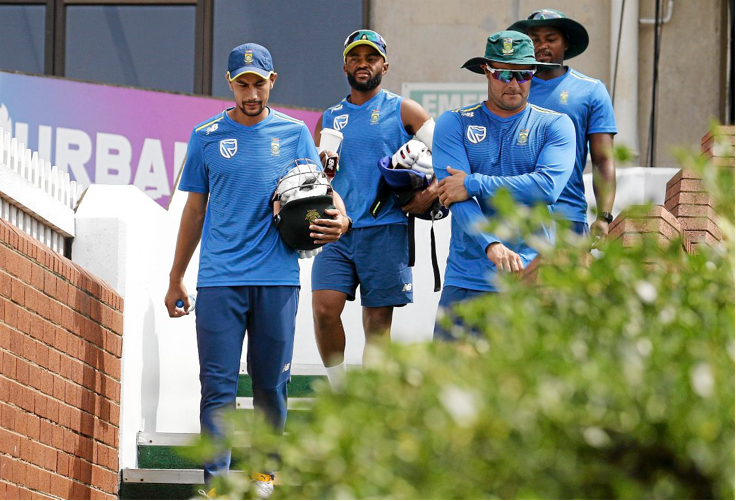 The Proteas are a team in turmoil, on and off the field.
Image: Anesh Debiky/Gallo Images/Getty Images

The Proteas will travel to the UK for a full tour against England that will include three ODIs, three T20s and a three-match Test series from July 19 to September 12 next year.

Cricket South Africa (CSA) confirmed on Wednesday that the tour will begin with a three-match ODI series, with the opening match set for the Riverside at Chester-le-Street on July 19, Old Trafford on July 22 and at Headingley on July 24.

The Proteas will then play a three-match T20 series in Bristol (July 27), Sophia Gardens (July 28) and Southampton (July 31).

The English tour will conclude with a three-match Test series at Lords from August 17 to 21, Edgbaston from August 25 to 29 and the Oval from September 8 to 12.

The Proteas are currently in Sri Lanka for a six-match limited-overs series.

CSA director of cricket Graeme Smith said the bumper tour to England would offer the Proteas much needed game time.

“Competitive cricket for our national teams is vital for their growth and progress and a tour of England is one of the bigger challenges that our players will face, particularly with their fully (Covid-19) vaccinated crowds backing the home team,” said Smith, who promised more mouth-watering fixture announcement.

“We have a bumper season ahead for the men’s team that we are thrilled to be announcing soon, with some really exciting match-ups, along with another ICC T20 World Cup in the mix.

“Game time is going to be crucial for the ultimate success of this team as they also begin a new season of the ICC World Test Championship and continue the road to the 2023 ICC World Cup through the ICC Men’s World Cup Super League,” said Smith.

With the T20 World Cup in October and November in the UAE and Oman, the Proteas are currently in turmoil on and off the field.

Smith himself is under scrutiny, due to the questionable manner in which he was appointed, due to a lack of qualification and administrative experience, and his salary which was allegedly improperly increased.

He has also not escaped the fallout and controversy flowing from the CSA Social Justice and Nation-building hearings.

The Proteas departed for Sri Lanka last with a dark cloud hanging over embattled head coach Mark Boucher, who admitted to singing along in a racist song that referred to former Proteas teammate Paul Adams as “brown shit”.

Before leaving for Colombo, Boucher said in a 14-page affidavit submitted to the hearings that he “deeply regrets” his conduct during his playing days.

But the situation was exacerbated before he left the country after the team had to leave without his assistant coach Enoch Nkwe, who resigned  citing his “concerns about the functioning and culture of the team environment”.

The Proteas’ problems worsened after they lost 2-1 in the ODI series against Sri Lanka, as the team seemingly struggled to put the off-field turmoil that has engulfed CSA’s administration over the past 18 months behind them.

It was yet another dispiriting series defeat under Boucher.

Although the team was without Quinton de Kock, David Miller, Lungi Ngidi and captain Temba Bavuma, who had to fly back home after he was ruled out due to a finger injury in the opening ODI, the series defeat did not help SA’s quest for automatic qualification for the 2023 50-over World Cup.

Boucher and his team will be at full strength, barring the injured Bavuma, as they search for redemption in the T20 series with matches on September 10, 12 and 14.

Afghanistan Cricket Board (ACB) chiefs are still awaiting instructions from the country's new Taliban government on the future of the women's game ...
Sport
11 months ago

Under pressure Proteas coach Mark Boucher has decided to take positives from the 2-1 ODI series defeat to Sri Lanka in Colombo, even though the ...
Sport
11 months ago

SA failed trial by spin spectacularly on the dry pitch at the R Premadasa Stadium in Colombo to lose the third and final ODI and the series 2-1 to ...
Sport
11 months ago

India opener KL Rahul was fined 15% of his match fee for protesting against the umpire's decision during his dismissal in the fourth test against ...
Sport
11 months ago

Cricket SA (CSA) is the custodian of all cricket activities in SA, and its board of directors is entrusted with ensuring compliance with its vision, ...
Opinion & Analysis
11 months ago