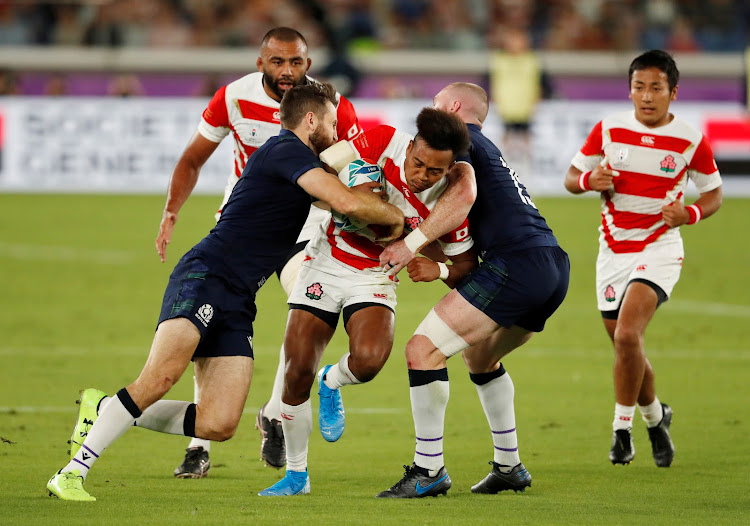 It is Japan's stated aim to up the ante even further when they play South Africa in their Rugby World Cup (RWC) quarterfinal here on Sunday.

Japan who have impressed with their high tempo‚ high energy game want to introduce‚ or rather expose the Springboks to their whirl wind style of play.

It is no coincidence that their wings Kenki Fukuoka and Kotaro Matsushima have scored nine tries between them at this RWC.

On top of that‚ flyhalf Yu Tamura is the leading points scorer in the competition.

The Brave Blossoms swept Scotland off their feet in the first half of their last pool match and at one point it looked as if they’d blow Gregor Townsend’s team away.

Scotland‚ however‚ staged a stirring second half comeback and it is perhaps that‚ more than Japan’s attacking game the Boks will focus on this week.

Emboldened by that first half performance against the Scots‚ Jamie Joseph’s side now wants to maintain their high intensity against the Boks.

They want to deliver a first ever match in which the ball remains in play for at least 50 minutes.

It is will require a lung busting effort and although unlikely the Boks will have to try and keep up.

“It’s not something that you’re generally used to‚ but luckily we played Japan five weeks ago or so we’ve experienced the style they play.

“They’ve said that they want to play a 50-minute ball-in-play game and that’s a bold thing to say but it’s also a good thing to chase.

"I think they’ve reached 39 minutes and a few seconds so far‚ so they’re 11 minutes shy but you never know that might happen come Sunday.

“So they’ve got a specific style‚ and they pride themselves on that style‚ and we also have our specific style. But we also need to adapt to their style and see what we can do to counter that.”

Japan would want to limit the collisions and keep the ball moving against opponents they regard as ponderous.

The Boks by contrast would want to hold the hosts in a firm grip for as long as possible.

Apart from Japan’s high tempo-ed game the Boks will also have to deal with a crowd that is likely to be whipped up in a frenzy on Sunday.

“It is a tough one. I don’t think you can ever prepare for that‚” acknowledged Springbok scrumhalf Herschel Jantjies.

“For us it is important not to lose our cool and stick to what we do best. Try and control it and hopefully we can nullify their pace‚” said Jantjies.