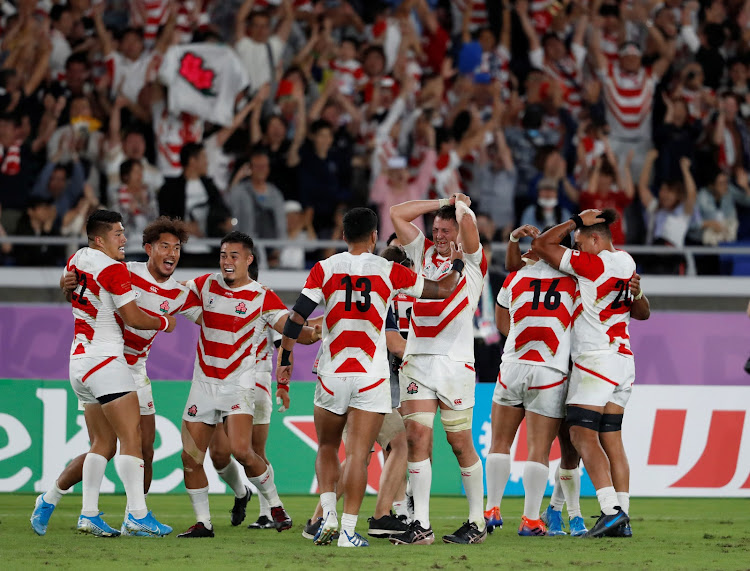 Japan players celebrate at the end of the match.
Image: REUTERS/Matthew Childs

Only a few could have predicted that Japan would emerge unscathed from Pool A in the Rugby World Cup and book a high stakes Tokyo quarterfinal date against South Africa.

The thing is World Cups‚ even the rugby form where play-off paths are determined well before the tournament actually starts‚ do throw up some unexpected results.

That Japan‚ who've ambushed the Springboks before‚ are worthy play-off adversaries is testament to the structures in place in the country.

However‚ there's three other mouth-watering quarterfinal clashes that for all intents and purposes could go in any direction.

The two matches in Oita will see England and Australia‚ and Wales and France‚ pitted against each other.

Tokyo has the benefit of the New Zealand/Ireland and Japan/South Africa matches.

While this should be a rule‚ it's somehow the exception.

Match officials haven't covered themselves in glory in this tournament and the play-offs are the perfect redemption stage.

There's a lot at stake and you don't want to be the referee who's remembered for doing a number on teams.

It's thin margins of error in the play-offs and the jury is out on the officials‚ especially Frenchman Jerome Garces‚ who's handling of the All Black/Springbok game was nothing short of an abomination.

Michael Cheika is a decent coach‚ but will be increasingly remembered for his outbursts rather than how his team plays.

Eddie Jones is the master of the mind game and the one liner.

There's still some time to go before these guys and their teams square up on Saturday‚ but expect some trash talking before their physical and skilful encounter.

Has Cheika settled on a half-back combination?

Can his forwards meet England's powerful and athletic challenge?

Can Michael Hooper and David Pocock (Pooper) again steal England's World Cup thunder like they did four years ago?

The 50th Test instalment of this encounter will answer all of them.

There's only one lingering question for Australia: Can they snap England's recent dominance as England have won the last six matches and nine of the last 11 matches dating back to 2010?

The All Blacks were under pressure leading into the World Cup after some indifferent results‚ but silenced detractors with a consummate 23-13 win against the Springboks where they dished out a lesson in using your opportunities.

The All Blacks were muzzled and outmatched physically in Chicago and Dublin; a rarity but the All Blacks showed against the Boks that recent form counts for nothing in the heat of a tournament battle.

The All Blacks will be asked to front up and Ireland‚ who've never progressed past the quarterfinal stage of a World Cup‚ will have history on their minds.

4) Can the real France please stand up?

Well‚ the current lot‚ an erratic one at that‚ has to answer that question against an efficient Welsh unit on Sunday.

Physically and structure they have but whether they have the attacking smarts and the passion to show up Wales is another story.

France have the tendency of being spectacular and ordinary on the same wavelength.

Which one will show up in Oita on Sunday?

This is not a drill.

Japan have only lost one out of eight pool games in two World Cups.

This again is not a drill. Japan beat Scotland and Ireland in the same World Cup.

This is the threat that faces the Springboks on Sunday in Tokyo.

The Boks have the physical‚ tactical and skill armoury to see off Japan.

Do they have the guile‚ the conditioning and the right mental headspace to prevail where Scotland and so critically in 2015‚ where Heyneke Meyer and the class of 2015 failed?

The next episode of the South African/Japan rugby mini-series will reach its exciting conclusion.