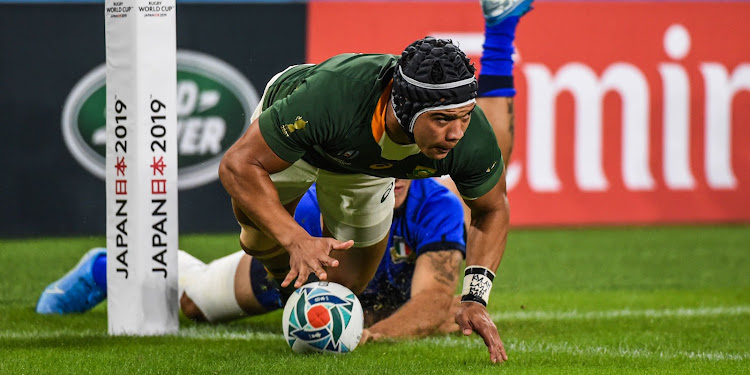 Cheslin Kolbe scores a try during the match against Italy.
Image: @Springbok/Twitter

Cheslin Kolbe’s troublesome ankle is casting an ominous shadow over his availability for Sunday’s Rugby World Cup quarterfinal against Wales in Yokohama.

Kolbe first pulled up with the injury in the Springboks’ 49-3 win over Italy in the Shizuoka Stadium and was rested for their final pool match against Canada.

He has since returned and featured against Japan last Sunday before he was replaced in the 71st minute.

He has been unable to train since.

“We are trying to manage him and give him the best opportunity to recover. Hopefully he will be ready for the game.

“But at the moment‚ everybody is still there for selection for Sunday‚” said Stick in the hope Kolbe will make a full recovery.

Kolbe has been one of South Africa’s most potent threats in attack and his absence will blunt their ability to cut the Welsh defence. Under the high ball he has been up to the challenge.

It is a discipline in which the Boks are likely to be severely tested against Wales.

The Dragons’ pragmatic style sees them playing to the opposition’s weaknesses and their focus is very much forcing errors from their opponents. The high ball is a preferred pressure point area for them.

The man most likely to replace Kolbe should he yield to the injury is S’bu Nkosi. He has had to play second fiddle to Kolbe and Makazole Mapimpi at this World Cup but he knows he has to keep his chin up.

“I think we all got equal amount of game time‚” said Nkosi.

“It’s been alright. We are a united squad. We’ve had chances to slot in. It hasn’t been very hard‚ it has been quite seamless. There are principles that drive the way we play. It is easy for us to slot in.

“When we are not playing we make sure the team’s preparation is of a high quality. We play that role so that they can be prepared as much as they can be for Sunday’s game‚” said Nkosi.

Wales too have an injury concern with centre Jonathan Davies doubtful for the match. They are expecting him to be fit for the game.

“He is getting back to it‚ so I would like to think he is going to be taking a full part this week in training and obviously be fit for Sunday.

"He is a key player for us‚ a big player‚ someone that we need fit‚ realistically. Owen (Watkin) did exceptionally well on Sunday and is a talented player‚ but the more numbers we have‚ the better.

“Jon trained most of the week last week but didn't feel he was quite right. It's an important game on Sunday and we need all hands on deck to get through that match.