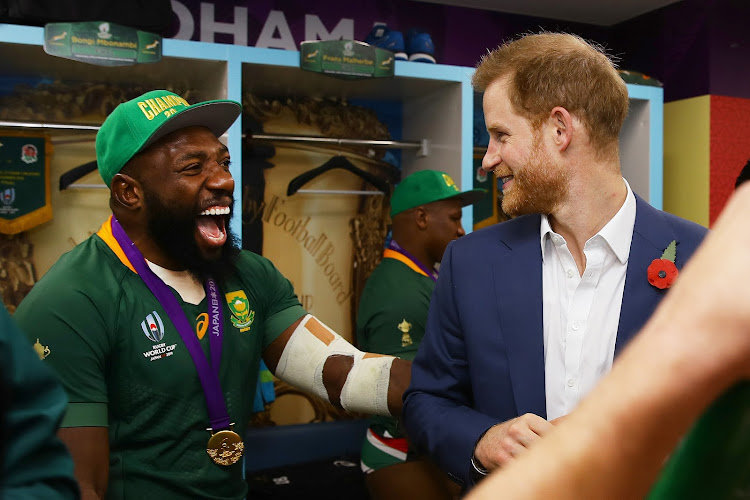 In this handout image provided by World Rugby Prince Harry, Duke of Sussex shares a joke with Tendai Mtawarira of South Africa following his team's victory against England in the Rugby World Cup 2019 Final between England and South Africa at International Stadium Yokohama on November 02, 2019 in Yokohama, Kanagawa, Japan.
Image: Handout/World Rugby via Getty Images

With Mtawarira having turned 34 on August 1‚ it was only a matter of time before he retired.

He couldn't have chosen a better time‚ with his last Test being the 32-12 evisceration of England in Saturday's Rugby World Cup final in Yokohama.

It also made perfect sense for Mtawarira to retire after beating England.

In the 11 Tests he played against the Red Roses‚ he won eight‚ with a draw and two losses.

Mtawarira‚ who won 74 of the Tests he played in‚ was fond of the Rugby World Cup‚ featuring in 17.

He lost three of those match‚ two of them against the All Blacks‚ but at the third time of asking‚ he was on the good side of a gold medal.

He also featured in the 2009 British and Irish Lions Series where he famously ended Phil Vickery's career.

Like most players‚ Mtawarira experienced highs and lows‚ but his last two years saw him roll back the clock and put a number of tighthead props in their places.

One of those was England's Dan Cole‚ who was scrummed into the Pacific Ocean during the course of SA's dominant performance.

He retires as South Africa most capped prop and the third most capped Springbok. He's never been without gratitude.

“I’ve been privileged to play this great game and achieve many career goals over the last 12 years of playing senior rugby‚” Mtawarira said.

“I’ve been blessed to have been part of teams that achieved so much success over the years‚ and I have many memories to cherish forever‚ but I can honestly say that winning the Rugby World Cup is the perfect ending and cherry on top.”

Springboks coach Rassie Erasmus has revealed that he agonised over inspirational captain Siya Kolisi's lack of game time on the eve of the Rugby ...
Sport
2 years ago

'I don't quite believe what I've done or achieved,' says Makazole Mapimpi

Makazole Mapimpi, South Africa's top try scorer at the Rugby World Cup, didn't quite believe what he and his teammates achieved by winning the ...
Sport
2 years ago

Frans Steyn: 'This one is special and we know the state our country is in'

Frans Steyn experienced a heady Paris night in 2007 when he became what remains the youngest Rugby World Cup winner as a fresh-faced 19-year-old.
Sport
2 years ago