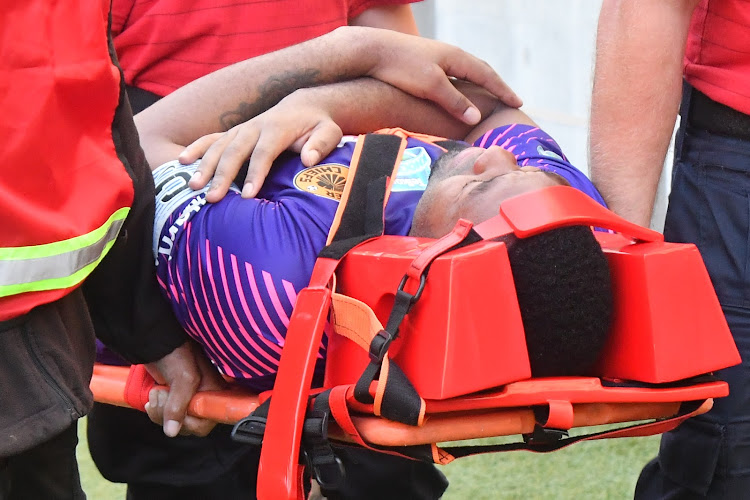 Itumeleng Khune of Kaizer Chiefs is stretched off during the2017 Telkom Knockout game between Chippa United and Kaizer Chiefs at Nelson Mandela Stadium in Port Elizabeth on 05 Novemberr 2017.
Image: Deryck Foster/BackpagePix

Inspirational Bafana Bafana goalkeeper Itumeleng Khune will find out on Tuesday morning if he will be ruled fit to play in the crucial 2018 World Cup qualifier against Senegal at Peter Mokaba Stadium on Friday night.

Khune‚ who has been capped 84 times by the senior national team‚ suffered a fracture to a bone in his face when he collided with Kurt Lenjties in his club Kaizer Chiefs’ 1-0 over Chippa United in the Telkom Knockout quarterfinals at Nelson Mandela Bay Stadium on Sunday afternoon.

He remained in Johannesburg after Chiefs’ return to the city earlier on Monday and did not proceed to Polokwane to join the national team in camp.

Bafana team doctor Thulani Ngwenya was non-committal when asked if there was any hope that Khune would be available to face Sadio Mane and company in a must-win clash for Bafana to keep their qualifying hopes alive.

“We have done our assessments as we normally do and most of our players are fine‚” said Ngwenya during a media briefing on Monday.

“Khune was rushed to an emergency room in PE (Port Elizabeth) where he did a scan and it was confirmed that indeed there is a fracture on one of the facial bones.

“They landed in Johannesburg (on Monday) and he will be seen by a doctor (on Tuesday) at 9am‚” he said.

“Unfortunately‚ when it comes to medicine we deal with evidence and facts.

"We are (hopeful) as a team‚ but we will never comment whether he would be fit or not until we know the actual results.

“We have got information that the fracture is not displaced‚ which brings about hope but we are not sure of the extent of the injury‚” Ngwenya continued.

Ngwenya also confirmed that team captain Thulani Hlatshwayo is a doubtful starter owing to a toe injury‚ but he expressed confidence that “Tyson” would be fit.

“It’s Thulani‚ the captain‚ and he has a contusion on his toe‚ but we are hopeful that we will manage him and he will be ready‚” Ngwenya added.

Five overseas-based players are not in the country yet due to flight delays and cancellations.

They are expected in the next couple of days.

Also missing are the Chiefs duo of Siphiwe Tshabalala and Mulomowandau Mathoho‚ who were also in Port Elizabeth but are expected in camp on Tuesday.

SuperSport head into camp ahead of African Confederation Cup final

England used it at the 2010 World Cup‚ Bafana Bafana like to stay there regularly and now SuperSport United are decamping to the Royal Marang Hotel ...
Sport
4 years ago

Many of the overseas-based South African players who will be part of the Bafana Bafana squad that tackles Senegal in back-to-back World Cup ...
Sport
4 years ago

Itumeleng Khune has suffered an optical fracture and will miss the two qualifiers against Senegal over the next week as South Africa’s already-slim ...
Sport
4 years ago