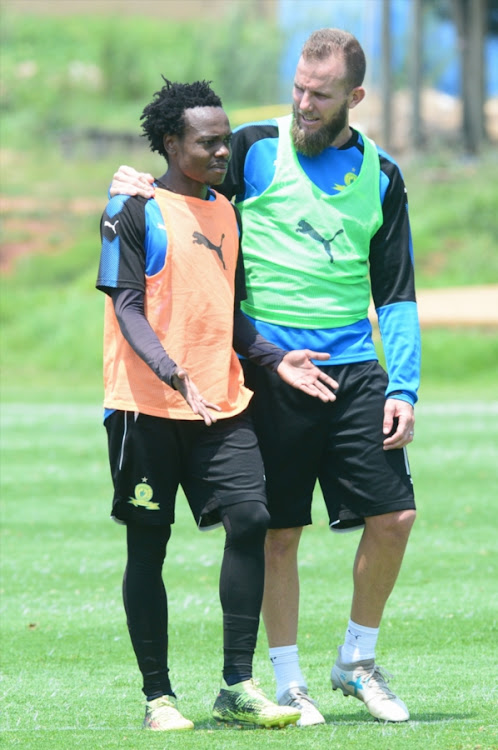 Mamelodi Sundowns' forwards Percy Tau and Jeremy Brockie during the club's media open day at their training base at Chloorskop on February 07, 2018.
Image: Lee Warren/Gallo Images

Brockie joined Sundowns from Supersport United last month and he got his first opportunity to start a game alongside the duo in the league match against Cape Town City last week.

Sundowns won that game 1-0 after Tau beat several defenders and then produced an audacious flick into the box that Billiat met with a volley in the 48th minute to win the game for the Brazilians.

"I think if you are talking about the best players in the league‚ you just name the two of them (Tau and Billiat)‚" said Brockie of his partners.

"The ability they have‚ to glide past players‚ you can see.

"The goal that we scored there (against City) was unbelievable.

"To be able to share the pitch with those two is awesome."

Ubuntu Cape Town grabbed a major scalp as the opening night of Nedbank Cup action on Wednesday saw the club struggling at the bottom of the two tiers ...
Sport
4 years ago

Cape Town City knock Wits out of the Nedbank Cup

Cape Town City have had so many smash and grabs against Bidvest Wits this season a charge sheet should have been laid at the SAPS.
Sport
4 years ago

Muhsin Ertugral says he is not afraid to throw new signing Siboniso Gaxa into the Ajax Cape Town side at any time‚ even if the former Kaizer Chiefs ...
Sport
4 years ago