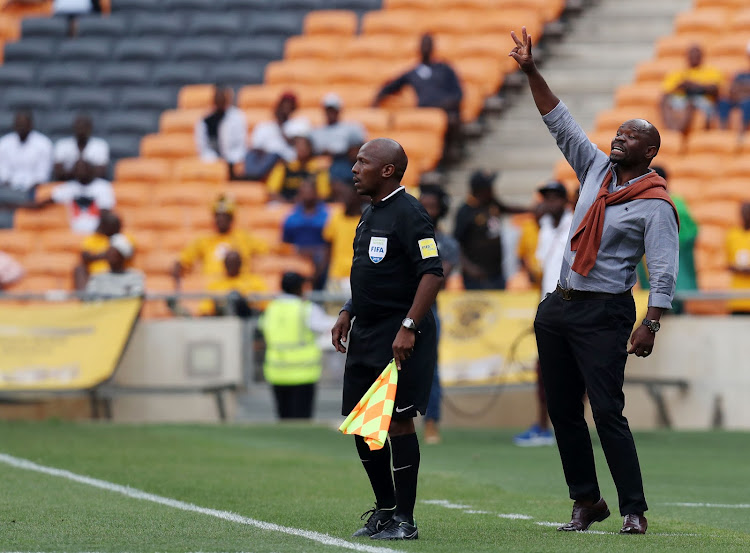 Kaizer Chiefs might have managed to get close to log leaders Mamelodi Sundowns in the race for the league title at the weekend but their lack of finishing gave their coach Steve Komphela plenty to think about.

The win‚ their eighth in 21 matches‚ saw Amakhosi closing the aperture between them and Sundowns to four points as they moved to 34‚ although the Brazilians have a match in hand.

"We regret the chances that we missed‚" said Komphela pointing to the missed opportunities by Siphelele Ntshangase‚ Moon‚ Joseph Molangoane and Hendrik Ekstein.

Improving goal scoring will be vital for Komphela as their scoring rate is nowhere near Sundowns who have a healthy goal difference of 15 against Chiefs' seven‚ as they've managed to bang in 32 goals in 20 matches.

"Today we could have won 2-0 or even more with all the chances that we had‚" lamented Komphela.

"It counts. But you can't stress over it. But sometimes you cannot want to go for goals and forget the points.

"So we should be also be appreciative of what we have and try improve on it."

Certainly there are signs of some development at Chiefs with Komphela having accepted that starting Moon and Leonardo Castro up front is a better option.

The two strikers combined to get the all important goal for Chiefs on Saturday.

Komphela had full praise for Moon who is now top league scorer for Chiefs with four goals.

"As Benni (McCarthy‚ City coach) put it‚ the guy (Moon) apart from luck‚ he's ready to pounce at any given time.

"We'll just have to keep praying that he keeps banging them in.

"We also depend on the ones coming just next and behind him to do the same. I thought Castro did well tonight‚ supporting Moon.

"We'll request you (media) to give him (Moon) time and support and assist him in keeping his feet on the ground."

With this win‚ Komphela believes they now have a huge chance to push Sundowns all the way for the league title.

"That we are in to challenge for the championship‚ with a difference of four points‚ you can say there's great optimism and hope.

"The only time you can say it's over is when mathematically you can't make it.

"For us this win is a great confidence booster and an indication that we would love to win the championship. But we still need to dig deep and fight for it.

"We just have to keep our focus‚ take it one game at a time and understand it's only four points. Anybody who slips is going to be unfortunate."

Benni McCarthy did not exactly blast his own players after the game but left little doubt that he thought Cape Town City were always second best in ...
Sport
4 years ago

Chiefs down Cape Town City to move second on the log

Title hopes remained alive for Kaizer Chiefs as they edged Cape Town City 1-0 at Soccer City on Saturday night and moved into the second place in the ...
Sport
4 years ago

Muhsin Ertugral said his close relationship with Ajax Cape Town‚ and seeing the club’s relegation struggles‚ persuaded him to backtrack on a previous ...
Sport
4 years ago

Kaizer Chiefs’ players are aware of coach Steve Komphela’s precarious situation‚ and want to fight for the coach to win silverware so he can stay at ...
Sport
4 years ago