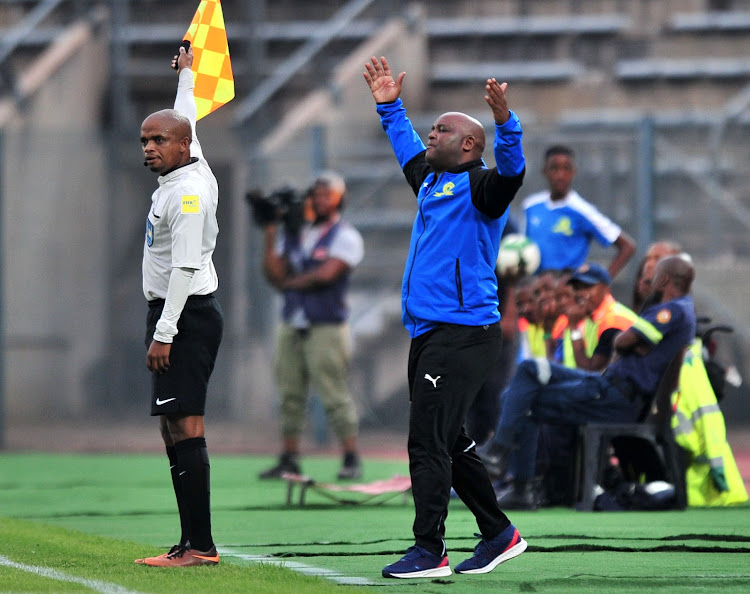 Even before Kaizer Chiefs spurned a chance to catch up to within three points of his team‚ Mamelodi Sundowns coach Pitso Mosimane was not overly concerned about that prospect after his team were held to a draw‚ Downs' second in a row‚ by SuperSport United on Saturday night.

Mosimane was not pleased at dropping four points in 1-1 home draws against Free State Stars at Loftus Versfeld on Wednesday and then SuperSport at Lucas Moripe Stadium.

But he was also not getting himself even close to a panic.

Speaking after the game – and before Chiefs failed to capitalise with a 0-0 draw against Bloemfontein Celtic at FNB Stadium in a later match – Mosimane was calm about the prospect of the points gap being closed.

“Have they (Chiefs) cut the points down?” Mosimane queried‚ in reference to Amakhosi playing later.

“Ah‚ OK‚ let’s talk on Monday then. And we are still in pole position (even if Amakhosi had cut the lead).

“And you know the (Chiefs-Pirates Soweto) derby is coming (on Saturday).

"You know what’s going to happen there. What do we usually get there? (The derby is known for being a draw).

“So maybe the Tshwane derby draw is still good.

“How can I worry about somebody who’s still got to pass us. I’ve got the lead.

Downs travel to AmaZulu at King Zwelithini Stadium on Saturday.

Despite it having appeared possible at one stage, it is far from a foregone conclusion that Mamelodi Sundowns will run away with the 2017-18 Absa ...
Sport
4 years ago