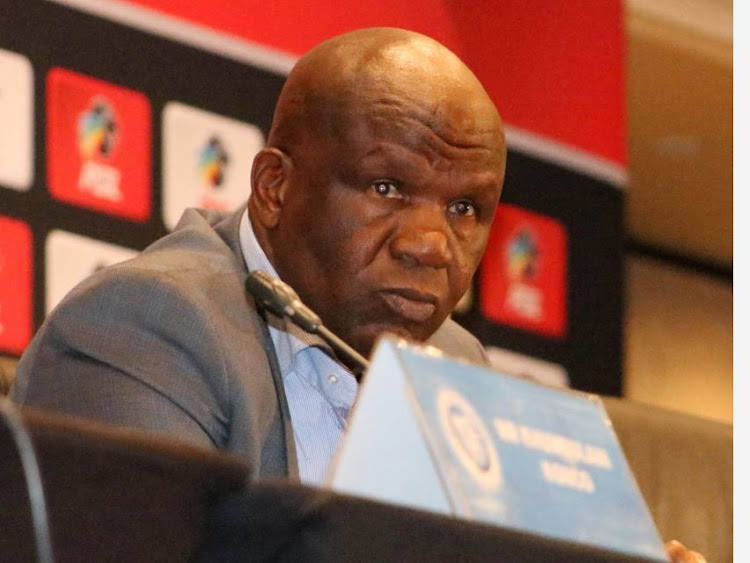 Black Leopards chairman and owner David Thidiela addresses media during PSL Special Board of Governors at Emperors Palace in the east of Johannesburg on September 20 2018.
Image: BackpagePix

David Thidiela maintains that his one-year ban from football-related activities was a travesty of justice and the Black Leopards owner is confident the decision will be overturned on Friday at an appeal hearing.

Thidiela will come face to face with the Premier Soccer League (PSL) during the hearing set to take place at Safa House.

The SA Football Association are conveners of the hearing.

The outspoken but controversial Thidiela was banned by the PSL last month and fined R1m as punishment for a tribal rant he aimed at referee Victor Hlungwani that included apparent threats last year.

The PSL disciplinary committee found Thidiela guilty of bringing the League into disrepute for the tirade he directed at Hlungwani following an Absa Premiership match between Leopards and Bloemfontein Celtic in Thohoyandou in September‚ a game his side lost 1-0.

Black Leopards owner David Thidiela has been found guilty by the PSL’s Disciplinary Committee for his tirade at referee Victor Hlungwani during an ...
Sport
2 years ago

Speaking on behalf of his client Thidiela‚ Advocate Eric Mabuza‚ who will represent the Leopards boss at the appeal hearing‚ told TimesLIVE that they are confident the one-year ban will be set aside.

“We still maintain that Mr Thidiela’s ban was an injustice and we are of the view that the decision could be overturned by the hearing‚” said Mabuza.

“It doesn’t sit well with us also that the whole process that led to his ban was carried out in absentia and that’s one of the things we will be putting on the table at the hearing.”

Safa legal officer Tebogo Motlhanthe said it is all systems go for the hearing scheduled to start at 5pm.

“It should take a couple of hours before a decision is handed down‚” said Motlhanthe‚ who added that veteran advocate Sthembiso “Sticks” Mdladla is the chairperson of the hearing.

Former school teacher Steve Komphela says he would not give himself a pass mark for his results since taking over at Lamontville Golden Arrows‚ even ...
Sport
2 years ago

Thidiela and Leopards’ lawyer Mabuza will square up against Nande Becker on behalf of the PSL.

Thidiela’s ban resulted in him losing his place on the powerful PSL executive committee.

The firebrand Leopards boss incensed the league’s executives in December when he launched a scathing attack of PSL chairman Irivin Khoza.

In the letter‚ Thidiela called for regime change and‚ in reference to Khoza‚ said the League needed “more than one man” to make decisions.

Thidiela went as far copying world football governing body Fifa in his letter and asked for the establishment of a commission of inquiry into the way the PSL runs its affairs.

However‚ his one-year ban did not involve accusations and allegations he made in his strongly-worded letter.