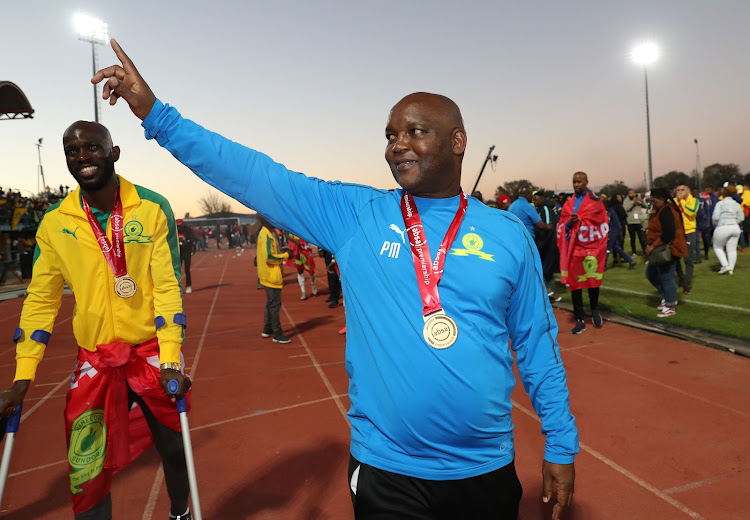 Mamelodi Sundowns coach Pitso Mosimane has rejected claims that the club destroys careers and insisted that Patrice Motsepe's side creates millionaires instead.

Mosimane said the critics should look no further than players like Bongani Zungu‚ Keagan Dolly‚ Percy Tau and Khama Billiat‚ among others‚ if they want examples of millionaire players who came through the Sundowns conveyor belt.

“We want the boys to become millionaires and build houses for their parents and for themselves‚” he said.

“People always say that Sundowns will ‘kill your career’ and I am saying if we kill careers where is Percy‚ Khama‚ Zungu‚ Dolly?

TS Galaxy striker Zakhele Lepasa grew up in Snake Park in Soweto supporting Kaizer Chiefs and it was his soccer-loving mother Ohopolang Monyai who ...
Sport
3 years ago

Zungu‚ Dolly and Tau left Chloorkop on big money transfers to pursue their careers in Europe while Billiat moved from Pretoria to Johannesburg to join rivals Kaizer Chiefs.

Mosimane said Sundowns would continue to attract players because of insistence on participating in the Caf Champions League every single year.

“It is important to sell the right story to these players and not the myth that we are a big club and we have many supporters because that story doesn’t work anymore‚" he said.

"If you asked a player five years ago if he wanted to go to Liverpool‚ he probably would have said no.

“He will ask you what are the chances of winning the Champions League?

"That’s the reason everyone wants to go to Barcelona‚ Bayern Munich‚ Juventus because you have a chance of playing Champions League and we sell that story to these boys.”

Mosimane pointed out he has players like Lebohang Maboe‚ Mahlambi‚ Thapelo Morena and Motjeka Madisha who will carry the team forward and maybe earn moves to overseas clubs.

Mosimane added that Sundowns are expected to do well in the league every year because they have always had a big chequebook to attract players.

Pitso Mosimane has explained why he was overcome with emotion after leading Mamelodi Sundowns to the league title a few days ago.
Sport
3 years ago

“Everybody likes to say Sundowns is supposed to win the league because they have a big chequebook‚" he said.

"Sundowns has always had a chequebook before I came here and there were seven years of drought.

"Probably the cheque at that time was bigger than the one I have.

"This year we signed a little bit more because we lost Tau and Khama and were not sure what to do‚ but next year we won’t sign many players.”