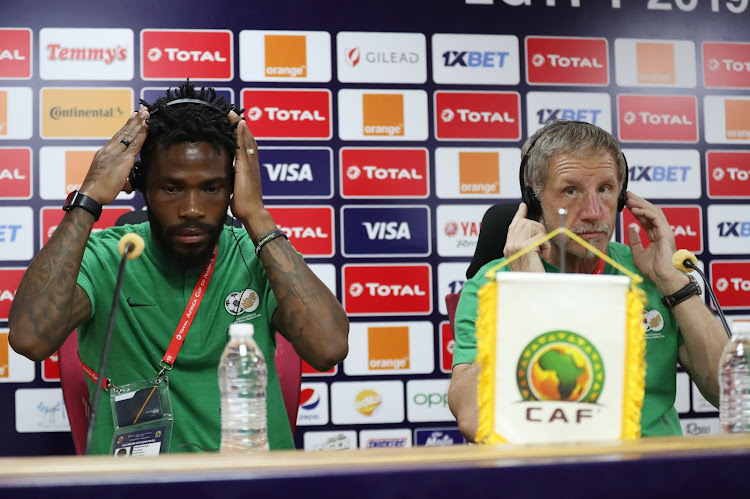 Bafana Bafana tackle Ivory Coast in their 2019 Africa Cup of Nations (Afcon) opener on Monday‚ and do so having never lost to the west African side before in six previous meetings.

It is a proud record against one of the traditional powerhouses of the continent‚ even featuring as the side that the great Didier Drogba made his international debut against all the way back in 2002.

The Ivorians may have lost their Golden Generation‚ but remain a side packed with quality and a number of dangermen for Bafana to contain.

Here is a look back at their six previous encounters.

Ivory Coast‚ in their pre-match press conference‚ gave off such an air of nonchalance on their opening Africa Cup of Nations (Afcon) game against ...
Sport
2 years ago

A goalless draw in the Four Nations Cup in Port Elizabeth would start the rivalry between the sides as Bafana battled to break down their opponents with a side missing the Leeds United duo of Lucas Radebe and Phil Masinga.

Brendan Augustine‚ Augustine Makalakalane and Marks Maponyane provided the attacking threat‚ but could not break through.

This was the second pool game for the sides at the 1998 Afcon finals and would end in a draw as a late Ahmed Ouattara equaliser denied Bafana full points.

They had taken the lead following an early penalty from Helman Mkhalele‚ after Pollen Ndlanya had been fouled in the box having been fed by Brandon Silent.

Both Ndlanya and Shoes Moshoeu struck the post after that‚ but at the other end Brian Baloyi put in a Man of the Match display in the Bafana goals.

His resistance finally broke when Ouattara headed home what was ultimately a deserved equaliser.

Both teams would qualify from the pool.

Bafana Bafana's record at the Africa Cup of Nations

Bafana Bafana’s steady decline as a power on the African continent is illustrated no more perfectly than in their record in the Africa Cup of Nations ...
Sport
2 years ago

This was a qualification match for the 2004 Afcon finals and saw the debut of Drogba in what was just the beginning stages of the Ivorians’ Golden Generation.

Kolo Toure‚ Didier Zokora and Bonaventure Kalou also started‚ but the game at the Felix Houphouet-Boigny stadium in Abidjan would finish goalless.

South Africa were captained by goalkeeper Andre Arendse and had a young Mbulelo Mabizela in their side‚ but were missing Lucas Radebe‚ Delron Buckley‚ Siyabonga Nomvete and Benni McCarthy through injury‚ while Jabu Pule [now Mahlangu] had missed the flight from Johannesburg.

The Ivorians piled on the pressure and had the ball in the back of the net late on‚ but the goal was ruled out for a foul on Arendse.

Who are the top Bafana names seeking to make their Afcon debuts in Egypt?

Bafana Bafana’s sporadic qualification for the Africa Cup of Nations (Afcon) in recent editions means they head into this year’s tournament with only ...
Sport
2 years ago

The return leg qualifier played in Polokwane went a long way to ensuring Bafana’s passage to the 2004 Afcon finals‚ with Mabizela by this time having been handed the captaincy of the team.

Benni McCarthy returned to the team after missing the first game‚ while Steven Pienaar and Delron Buckley gave strong performances.

The home side led when Buckley set Pienaar away and his cross for Bartlett was headed in‚ a 26th international goal for the forward.

Bonaventure Kalou equalised after a weak clearance from Tony Coyle‚ but the points were sealed when he turned home a cross from Stanton Fredericks in the second half.

Hard work does pay off‚ Kamohelo Mokotjo has said as the Brentford midfielder‚ so long passed over for Bafana Bafana selection‚ readies for his first ...
Sport
2 years ago

It would be another eight years before the sides met again‚ this time in the Nelson Mandela Challenge match played in Port Elizabeth.

There was no Drogba‚ but it was still a potent Ivorian team with the likes of Boubacar Barry‚ Yaya Touré‚ Gervinho and Salomon Kalou.

The visitors took the lead when substitute Siboniso Gaxa‚ playing in an unfamiliar left-back position for the injured Tsepo Masilela‚ turned the ball into his own net.

Bafana equalized thanks to a fantastic free-kick from Mphela though as he drilled the ball into the bottom corner of the net.

South Africa are likely to turn to gangly Dutch-born striker Lars Veldwijk as a surprise choice to lead their attack when they take on the Ivory ...
Sport
2 years ago

Another Nelson Mandela Challenge meeting‚ this time in Nelspruit‚ as both countries fielded severely weakened teams in a game that would see history as 17-year-old Fagrie Lakay became the youngest ever Bafana international.

The home side featured unfamiliar names such as Christopher Komane‚ Vuyisile Wana‚ Ntsikelelo Nyauza and Siyanda Ngubo‚ but also players who would go on to become key players in the future‚ such as Bongani Zungu and Themba Zwane.

Zungu opened the scoring just past the half-hour mark‚ while David Zulu bagged the second just after the break.

The Ivorians were coached by current Morocco boss Herve Renard.