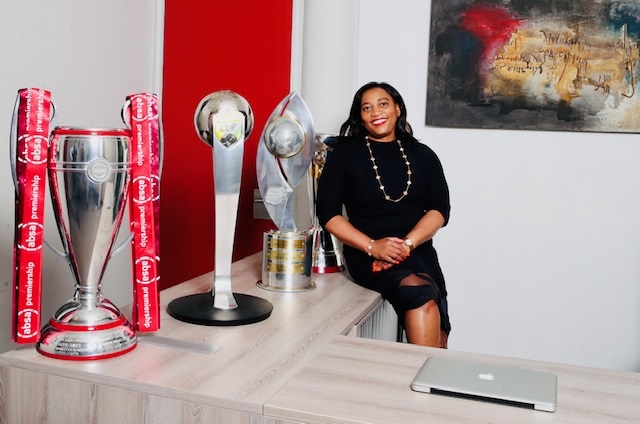 Connie Motshumi has been with the Premier Soccer League (PSL) for almost a decade and continues to revel in a job that she says remains an exciting challenge even after all these years.

TimesLIVE caught up with the PSL's  head of stakeholder relations and communications  and she narrated her journey as she looked back at her time with the league.

“I’ve been employed at the PSL for about nine years. The highlights occur regularly, because not one day is quite the same,” said the former Nelson Mandela Foundation communication strategist.

“One of the highlights is seeing the growth and transformation of my colleagues, some of whom started as interns but are now occupying managerial positions and contributing immensely to the growth, innovation and sustainability of the PSL.

“I also highlight the critical role played by all including the leadership of the chairman [Irvin Khoza] and the exco [the PSL executive committee] during the bio-bubble in 2020 (in the middle of a pandemic that we had never experienced nor anticipated). This bio-bubble has set the PSL apart as a leader within the sports industry, in SA and on the continent.

The SA Football Association (Safa) has confirmed that Premier Soccer League (PSL) referee Akhona Makalima has been nominated by the world football ...
Sport
1 month ago

“We managed to complete the 2019/2020 season even though we were in uncharted territory.

“The commitment and dedication of the PSL team [staff] demonstrates the passion for soccer, a term that is often loosely used, but we get to live daily. It is no longer about the job but about quality delivery to all our stakeholders of the beautiful game of soccer.”

Motshumi, a graduate of the University of Cape Town, worked towards her communications and public relations degree, and also obtained a postgraduate qualification in management practice.

The Chelsea superfan also completed her executive leadership development programme at the University of Melbourne in Australia.

“A typical qualification in communications, public relations and or business acumen, is a prerequisite [for the role] but more importantly, it is knowing how to build and maintain relationships with various stakeholders,” she said.

I have other ambitions within soccer, but not that of owning a soccer club. I don’t think my heart would be able to take it when my club loses, so I shall leave that to those who are braver than me.

Asked if she harbours ambitions of owning a soccer team one day, Motshumi did not beat about the bush.

“Oh, I have other ambitions within soccer, but not that of owning a soccer club. I don’t think my heart would be able to take it when my club loses, so I shall leave that to those who are braver than me.”

The former deputy chairperson of the transformation committee of Business Unity South Africa, said she’s grateful to have worked with a number of CEOs at the PSL.

“I’ve worked with three CEOs and it’s been rewarding, as they all had different strengths, backgrounds and experiences I could draw from, complement and learn from to deliver on our respective mandates for the PSL to succeed,” she added.

“No, I am not the longest-serving member, there are many who have been here before me and continue to be here.

“I like all soccer teams within the DStv Premiership and GladAfrica Championship. All the teams have a good story about how they started.

“These are stories of humility and a yearning to see something grow from just being a dream to becoming a flagship brand that is recognised among local communities to international levels (thanks to TV, internet and media coverage).

“The socio-economy that is derived from soccer teams is not about one value chain but more.”

Premier Soccer League club Maritzburg United has divided its hometown, causing an uproar with a R27m request for funding from the city that was ...
News
1 month ago

Lionel Messi came on as a second-half substitute to make his debut with Paris St Germain in a Ligue 1 game against Stade de Reims at the Auguste ...
Sport
1 month ago