Since Henk’s been in my life, I don’t talk so much to my food. It’s not right to neglect your friends just because you have a boyfriend, but luckily food is very forgiving and enjoys company even more than conversation. 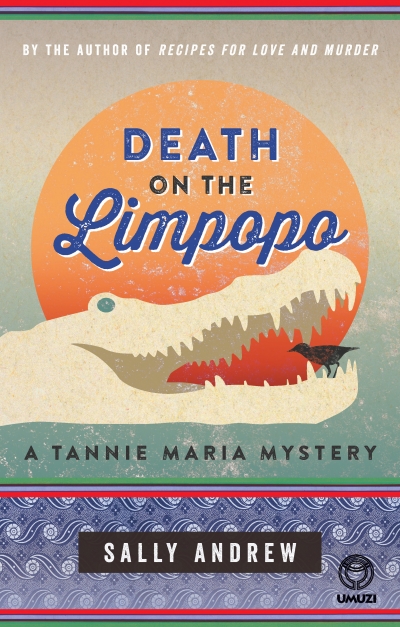 'Death on the Limpopo' by Sally Andrew.
Image: Umuzi

Tannie Maria might be the Karoo’s favourite agony aunt, but when it comes to matters of her own heart, she doesn’t have all the answers.

Why is she having trouble telling her beau – the dashing Detective Henk Kannemeyer with the chestnut moustache – that she loves him?

There are other, more pressing, problems too.

A tall, dark stranger zooms in on her Ducati motorbike: she is Zabanguni Kani, a journalist renowned for her political exposés, who, after receiving threats, moves in with Tannie Maria for safety. And who could tell that a trip to the country’s northern parts was on the cards?

The journey plunges Maria and her friends into pools of danger, amid water maidens, murders, and Harley Davidsons.

Ladismith’s famous crime fighter is back – with a tin of buttermilk rusks in hand – to restore peace from the Klein Karoo to the great Limpopo River.

It was a cold winter’s evening in the Klein Karoo. Henk was working, and I was in bed early, in my pink flannel nightie, reading Rudyard Kipling’s Just So Stories. The book my father used to read to me when I couldn’t sleep. My favourite story was "The Elephant’s Child". My dad said that I had the curiosity, the insatiable curiosity, of the young elephant that just had to know what the crocodile ate for dinner. The kind of curiosity that can get you into trouble. It almost killed the elephant, and it nearly killed me.

I put the book down on my bedside table, but held on to the bookmark: a postcard, torn apart and stuck back together. My ma would tear Dad’s cards in half and throw them away. This one I’d found and fixed with sticky tape. Years later, when the tape yellowed and peeled off, I stuck it together again. It was the last card I ever got from him. It showed some trees on the banks of the Limpopo River.

I turned over the postcard and read the words again:

Well, here it is: the great grey-green greasy Limpopo all set about with fever trees. Though it’s more brown than green wouldn’t you say? That skinny yellow tree is a fever tree and the fat ones are baobab trees. And there are crocodiles and elephants, and it looks much the same now as it did in Kipling’s day. Missing you, my Maria-Belle. I will bring you up here one day.

My fingers ached; I was holding on to the card too tightly. I missed my father.

I slipped the postcard between the pages of the Just So Stories and got out of bed. I put on my pale-blue dressing gown and sheepskin slippers, and added a log to the Aga stove that stood against a wall in my kitchen-dining-living room. On top of the big cast-iron stove, an oxtail stew gently bubbled, and rusks were drying out in the oven. My mother’s muesli buttermilk beskuit.

I’d got so much from my mother, perhaps too much. And a lot less from my father. My dad’s hair was thick and reddish, as were his beard and moustache. He kept both short; they got out of hand when he let them grow. He had long, strong, wiry legs and arms, high cheekbones, and a big nose. I had none of those. I’d got my ma’s body – short and plump, with curly brown hair. But I did have my dad’s green eyes, which might’ve helped me to see the world as he saw it. Although maybe I never got the full picture, because my mother was always closing the curtains.

I’d had too little time with my dad, but my ma had filled my life in a way that there was hardly any air left for me. She may even have been the reason I married early, to the wrong kind of man. Of course, I can’t blame her for what Fanie did. Though I wish she hadn’t told me to "stand by my man", when she knew what he was doing to me.

But I did get many good things from my ma. Underneath her fears, and her closed-curtain beliefs, she was loving and kind and strong. And she left me real things, things I can hold. The rocking chair by the fire, the Tupperwares and tins I still use, and, of course, all her wonderful recipes.

An owl called. Hoo-hoohoo. The soft sound of a Karoo night.

I made myself a cup of hot cocoa the way my ma had taught me, with milk and a pinch of salt.

"Mmm", I said to the cocoa, after I’d taken a sip. "Thank you." It felt like a comforting friend.

Since Henk’s been in my life, I don’t talk so much to my food. It’s not right to neglect your friends just because you have a boyfriend, but luckily food is very forgiving and enjoys company even more than conversation.

I sat down in an armchair by the black stove and took in its gentle heat. Henk thinks I should get a modern fireplace so we can watch the flames, but I like the way the Aga can cook food and boil water, and bake, while it warms the house.

The phone rang. It was Henk.

I don’t know how I got myself a man like Henk. At my age. He’s a big man, with a chestnut moustache, silver hairs on his chest, and warm hands. And a smile that makes my heart leap like a springbok.

"You still at work?" I asked. Lieutenant Henk Kannemeyer is a detective with the Ladismith police."

"I’m sitting by the fire in my nightie, drinking hot chocolate."

"Yum." From the way he said it, he was talking more about me in my nightie than the hot drink in my hand.

"I made oxtail stew," I said. "Want to come round tomorrow night?"

His little buck, that’s what he calls me. Though I’m not so little.

I loved Henk, but it felt like something inside me might break if I said the words out loud.

Henk’s voice added to the warm feeling I got from the stove and the hot chocolate. But I still had a cold space in my belly from missing my father. Even before he left my ma, he was away a lot, travelling. Dad was English-speaking, and reported on Africa for The Guardian newspaper. He wanted a divorce, but Ma refused. I’m not sure if it was because she loved him, or because in those days, a Christian Afrikaans woman just did not get divorced. It wasn’t all that different in my day. The same ideas get passed on from mother to daughter, along with the recipe books.

My dad moved out, and spent more time away from South Africa. He visited us less and less. Eventually he served my ma with divorce papers. She threw them on the fire and said she’d rather be a widow than a divorcee. And he let her be.

After those divorce papers, my ma got rid of everything that belonged to my dad. Apart from me. So, when I was eighteen and she got that phone call about his death, there was nothing left of his in the house. No piece of him for me to hold on to. Apart from a few postcards that I’d hidden away.

Dad was an only child, like me. His parents were dead, and my ma didn’t arrange a funeral. She told me he’d died in an accident and been cremated, but she couldn’t – or wouldn’t – tell me where his ashes were.

Ma was bitter that he’d left. But she was also angry that he’d died working "with the blacks" as an African National Congress "terrorist". The man who’d phoned her called Dad "comrade", and she could hear he was a black man. It was only years later that Ma told me Dad was an underground member of the ANC, which might explain some of the arguments they used to have.

I’m not one to stay in the shadows of the past, if I can help it. Even those years of abuse with Fanie that used to sit so darkly in my heart have almost disappeared in the soft sunshine of Henk’s love. But I’m telling this story about my father and how I longed for a bigger piece of him because I want to explain, to myself maybe, why it was that I went with a tall, dark stranger down a road filled with danger. To the place where the crocodile has its dinner.

It’s a black Karoo night and a young woman, covered in blood, is running along a deserted dirt track. A terrible thing has happened and the woman, ...
Books
3 years ago