Fiction Friday | 'They Got to You Too' by Futhi Ntshingila 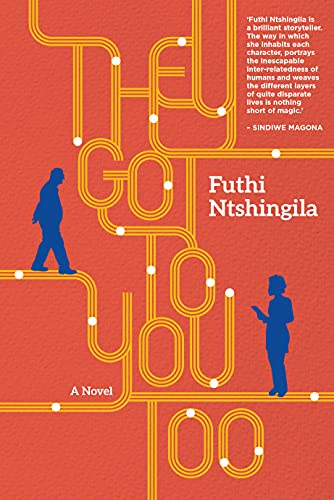 ‘Futhi Ntshingila is a brilliant storyteller. The way in which she inhabits each character, portrays the inescapable inter-relatedness of humans and weaves the different layers of quite disparate lives is nothing short of magic.’
– Sindiwe Magona

Hans van Rooyen is a former police general raised by two women who survived the 1899 South African War. He finds himself being cared for in an old-age home by the daughter of liberation struggle activists. At 80, he carries with him the memories of crimes he committed as an officer under the apartheid government. Having eluded the public confessions at the TRC for his time in the Border Wars, he retained his position in the democratic SA, serving as an institutional memory for a new generation of police recruits.

Zoe Zondi is tasked to care for the old man. Her gentle and compassionate nature prompts Hans to review his decision to go to the grave with all his secrets. Zoe has her own life story to tell and, as their unlikely bond deepens, strengthened by the isolation that Covid-19 lockdown brings, they provide a safe space for each other to say the things that are often left unsaid.

It’s April and the weather has changed. It’s nippy outside and the country is now in full lockdown mode. My Girlie has moved into the premises of the home and is locked down with us as an essential worker.

I am happy she decided to stay. We’re drinking a lot of hot chocolate, not only out of habit but because it’s getting proper cold at night. We spend hours talking. The news is more like the bioskoop than reality and our President is looking frightened and tired. Our Health Minister keeps us informed of the increasing numbers of cases and tries to give us assurances, as does our Minister of Police. Drunks and smokers are not amused by the ban on alcohol and cigarettes. Ms Rajah addresses all of us oldies, reminding us to stay calm. She’s introduced an hour of calming music in the morning and the evening. I have decided that best way to unfold the rest of my story to my Girlie is through an album of photos that I hand to her one morning. In the first photograph, my ma, Anneke, is sitting on a rock, looking straight at the camera with a tiny smile forming at the corners of her mouth.

Her eyes play a trick on me because it feels like she is looking at me and that she knows every godawful, deep, shameful secret of mine but she loves me anyway. Don’t the dead have a vantage point to observe all our foolishness?

‘This is my ma, my Girlie. I never got to meet her but from what I was told about her, I feel like she was the right mother for me and I was the right son for her.’

My birth, when Kristina told me about it, always left me feeling like I had done a terrible thing even before I was born. Kristina wasn’t one to shelter the youth; she spoke to children like she would to adults. My Oumagrootjie and Kristina were my mothers. Oumagrootjie was the owner of the farm, the Groot Dame, and Kristina lived on the farm.

They felt like one person to me. Two servings of mothering was both good and bad. Most children only have one mother so if they’re naughty they get one scolding and if they are good, they get one dose of love. I, on the other hand, got two dollops of scolding, which was bad if you knew those two fearsome women, but I also got two doses of love when I did things well. It was the best time for me when I got boiled sweets, sticky toffees and spookasem. It left me grinning and daydreaming about my own world.

The details of my birth were sketchy as Oumagrootjie was not much of a talker and saved her words for when it was absolutely necessary.

That was until I found some of her writing and the details of my birth they got to you too were not the only things I found out. I also got to understand the hell she had had to deal with in her life and the courage she used to protect the Groot Dame. Come to think of it, my survival skill of ‘’n boer maak ’n plan’ was inherited from her.

What little Kristina did tell me about my birth left me convinced that I had killed my ma. She would be horrified if she knew that her reticence to speak about Ma left me damaged for the rest of my life.

Guilt was a thorn in my side when I began to understand what it meant to be dead and added to this was the fact that I was a bit of a loskop as a boy. Sometimes I would be on top of the world and the next I would be picking fights. Other times I would be so down in the dumps that I would be frightened to leave the farm and go to school.

Kristina was a medicine woman, a midwife and a hell of a cook.

What I didn’t realise then, but what I can now add to her long list of talents, was that she could spin a tale so vividly that you found yourself in the story, seeing and feeling the details. A story is about the details and the benefit of hindsight. Time stood still when Kristina painted a picture with her words. If you were sensitive, it was best not to listen to her stories before you went to bed because you would be sure not to sleep.

According to Kristina, it was as if I was refusing to be born that day.

It was 1939 and the country was throwing in its lot with England and declaring war on the Germans. For hours, I clung to the walls of my mother’s womb, refusing to come out, and causing her indescribable pain.

‘Breathe Anneke, breathe,’ Oumagrootjie instructed, helping usher me into this maddeningly beautiful world. Ma was breathing and screaming at different intervals, sweating and blistering red in the face, fighting to get me out. I was fighting my own battle to stay where I was while my pa was in another room in the house, jittery and pacing, making sure he was in earshot.

Oumagrootjie then called out to my pa, Adriaan van Rooyen, and told him to fetch Kristina because my ma was having a breech birth. My pa took off in the direction of the farmworkers’ compound to call Kristina to come and help Oumagrootjie, the Matriarch. That’s what they used to call her. Many children on the farm fell from their mother’s warm watery place into the two women’s hands, screaming blue murder and looking like shrunken and slimy little prunes. Kristina and Oumagrootjie had worked together many times delivering babies and, in some instances, when a cow was in distress, they had delivered calves.

Kristina said she had been expecting to hear from Oumagrootjie because not only did she not like the look of my ma towards the end of her pregnancy, but she’d had a terrible dream and the sight of my pa sent cold shivers down her spine. She said she felt it before it happened and she outran my pa to get to the farmhouse.

She launched herself on the floor next to where the Matriarch was kneeling over a groaning Anneke, but she couldn’t look her in the eye.

‘Poor little thing,’ she said in Shona. ‘So young. All that way. And when will she come back?’
Books
5 months ago

Siphiwe Gloria Ndlovu on the genesis of her book.
Books
6 months ago