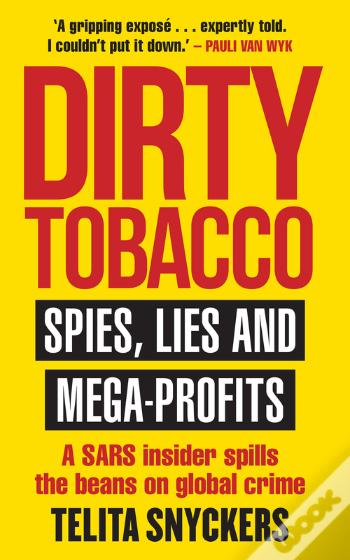 What is more profitable than cocaine, heroin, marijuana or guns? Illegally trafficked cigarettes ...

Reputable tobacco companies have – for decades – been complicit in cigarette smuggling. In this gripping exposé, Telita Snyckers uncovers the dark underbelly of the industry by recounting the instances where big tobacco was caught red-handed. She explores not only why a listed company would want to smuggle its own product, but also how it's done.

The result is a chilling chronicle of how the South African public and authorities were manipulated by tobacco interests and how big tobacco companies avoid coughing up their fair share, costing the SA Revenue Service (Sars) billions.

Snyckers connects the dots and explains why the murky tobacco industry has managed to flourish as one of the most profitable enterprises in the history of capitalism. When word got out about this book, the tobacco industry offered Snyckers a job. She turned them down.

Snyckers is an author and a tax and customs lawyer. She worked closely with Pravin Gordhan and Ivan Pillay during her tenure at Sars. She was admitted as an attorney of the High Court, she holds a master's degree in Constitutional Law, and diplomas in exchange control and the combating of money laundering.

Dirty Tobacco is available as an eBook.

Soweto Business Access has asked the government to lift the ban on the sale of tobacco products.
News
2 years ago

'It's astronomical': How much Joburg smokers pay to get their illegal fix

Would you pay up to R1,600 to buy a carton of cigarettes on the black market?
Lifestyle
2 years ago