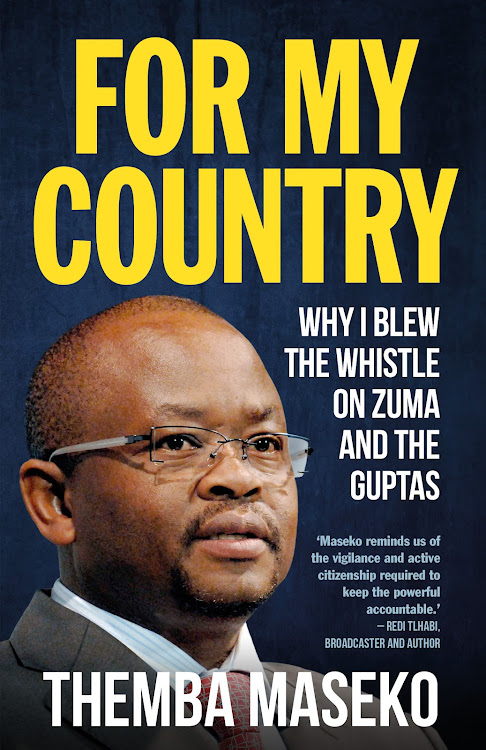 Themba Maseko's 'For My Country' offers a rare insider’s view of the presidencies of Thabo Mbeki and Jacob Zuma.
Image: Supplied

“When I joined the struggle as a 13-year-old boy in Soweto, I would never have imagined that one day I would blow the whistle on a special kind of corruption that was destroying the party and the values I had been fighting for all my life.”

In 2010, government spokesperson Themba Maseko was called to the Gupta family’s Saxonwold compound and asked by Ajay Gupta to divert the government’s entire advertising budget to the family’s media company. When Maseko refused to do so, he was removed from his position and forced to leave the public service.

The life of this once-proud civil servant would never be the same again.

Maseko, whose activism was forged in the Soweto uprising of 1976, is a product of the struggle, and has always been unfailingly loyal to the principles of the ANC. In 2016, when the party called on members with evidence of wrongdoing by the Guptas to step forward, Maseko was the only one to do so. For this courageous act of whistle-blowing, he was ostracised, slandered and even threatened.

As a former senior state official, Maseko also offers a rare insider’s view of the presidencies of Thabo Mbeki and Jacob Zuma and of the inner workings of government.

Compelling and revelatory, For My Country shows what it takes to stand up for one’s principles and defy the most powerful man in the country.

Susan Booysen’s analysis reveals Cyril Ramaphosa to be a president who is weak and walking a tightrope between serving the needs of the organisation ...
Books
10 months ago

Moe Shaik takes the reader on a thrilling ride, navigating the most turbulent and uncertain parts of SA's late apartheid and transition past
Books
2 years ago

Award-winning journalist Basson unveils the shady, cult-like underbelly of the criminal company that held the Zuma government in the palm of its hand
Books
2 years ago