She may be young, but this chart-topping Pretoria rapper isn't afraid to speak out about important issues - just listen to her lyrics, writes Tseliso Monaheng 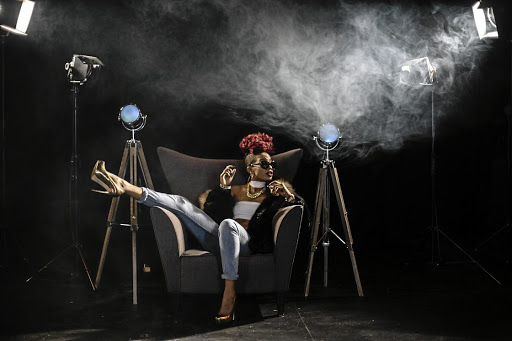 In 2013 Deko Barbara-Jessica Wedi, who is of Congolese descent but born and raised in Pretoria, was an upstart R&B singer who'd recently started rapping because of the push her producer friends gave her.

She was signed to a management company, had a publicist and, judging from the performance she gave at one press conference in 2014, was about to go bos on the world. Then it came crashing down. "Every single deal possible was gone. Funny enough, it was great for me because that's when I decided to go back to school," says Wedi, aka Rouge, who had taken a gap year after matric to seek out a career in music.

The biggest problem, notes Rouge in hindsight, was over-reliance on other people. "A few days after I lost my deal, I wrote Mbongo Zaka. I knew I had something."

Rouge appeared on AKA's Baddest remix at roughly the same time. That put her on the radar of producer Tweezy, then a hit-making maverick whose profile had been boosted by his production credits on AKA's solo endeavour, Levels.

Two months ago Rouge made South African rap history when her debut album New Era Sessions debuted at No2 on the local iTunes charts. She held a launch party and invited the friends she'd connected with along the way.

Rap outfit Betr Gang were there, as were rapper Priddy Ugly and producer Wichi 1080. Singer Shekinah was also there, as were the self-styled Young MaBrrr, Nomuzi Moozlie Mabena; DJ Ms Cosmo, on whose single Rouge features; and Sho Madjozi, who also features on the Ms Cosmo cut. The four of them hit the stage to perform, turning the venue into a centre for the rogue, the rugged and the free.

The highlight of the night was a teary-eyed performance of Celebrity, which Rouge dedicated to her parents who'd shown up for the launch.

I saw Rouge in action late last year, during filming of an MTV Base hip-hop cypher. She was grouped with rappers YoungstaCPT, Maraza and Priddy Ugly.

It had been raining heavily and filming had to be paused due to the location - a disused warehouse with corrugated iron roofing - not being soundproof.

Rouge seemed nervous, probably because of all the waiting around doing nothing while the rain pelted down, but when she did perform, she was regal.

There are questions one need not ask, if one has been paying attention over time. Rouge's views are in the music she makes, and in the way she has taken part in woman-centric initiatives, challenging the patriarchs who still control what gets the pass not only in rap, but in the music industry as a whole.

Naledi from her debut album is a case in point. It's about a girl who is judged by everyone around her on the basis of how she looks, and the way she is always seen among high-rollers.

Rouge says she had a friend fitting that profile, and no one knew the internal conflicts the friend endured daily.

"Wish I was pretty like Naledi/ but them boys just wanna fuck and never marry," goes the bridge.

It's a song about empathising with another person's situation - in Naledi's case, "a girl from the ghetto, who grew up in Soweto" - something a patriarchal society consistently fails to do.

There's a view that the local hip-hop scene is bereft of social consciousness, but I ask Rouge what she thinks about South Africa's political direction.

"I am worried," she responds. "We are almost in a space where we prefer to sleep with the devil we know than the one we don't know, purely out of fear of things getting worse than they are now. That is not growth."

Was she out marching to demand that fees and other things must fall?

"I went to marches as well as making my voice heard on the platforms I deemed possible," she says. "It's such an important fight especially as black people. It's not just about us but the future generation."

Rapper Nasty C has decided to boycott the annual SA Hip-Hop Awards, as he believes the organisation did not "properly acknowledge" his success.
TshisaLIVE
3 years ago

Rouge already has her next album figured out. She has a mixtape ready to be unleashed in December.

She is aiming high; her ambitions include headlining tours in stadium-sized venues, with everything handled by her team. Hers are not delusions of grandeur, but dreams awaiting their moment to be made manifest.

Favourite brand and shade of lipstick?

Hot or cold milk with your cereal?

Volleyball with my family.

Is there a song or rap verse you wish you'd written?

Under Pressure by Logic.

Rebirth of Cool is a super group - the brainchild of respected selectah (that's DJ, for the uncool folk) Kenzhero.
Lifestyle
4 years ago

Rapper Riky Rick has received global acclaim for some of his songs but he has shared his thoughts on why South African hip-hop won't dominate the ...
TshisaLIVE
4 years ago

6 of 2017's most interesting hip-hop albums so far

It's far from over, but this year has already produced some hip-hop gold, writes Yolisa Mkele
Lifestyle
4 years ago