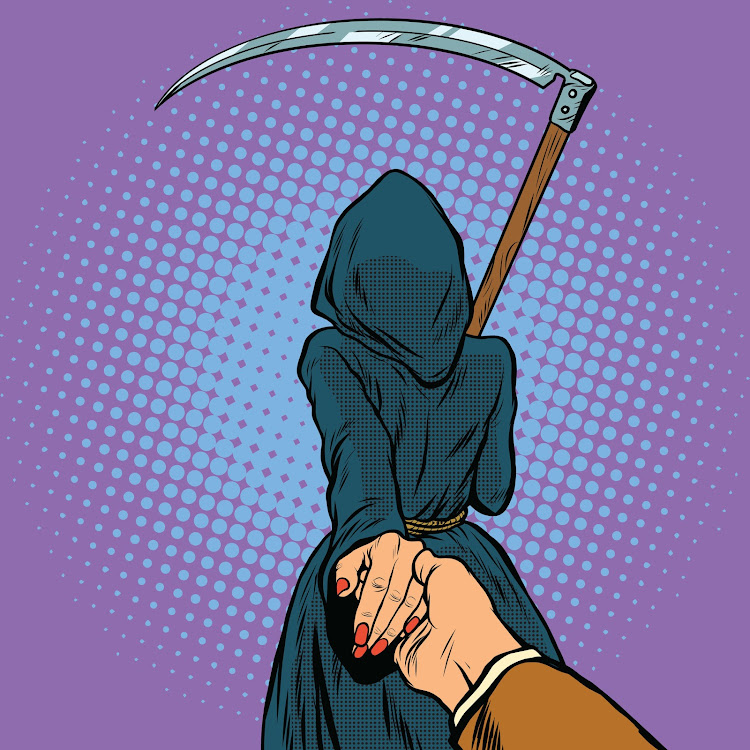 "He feels a terrible need to stop time, to clearly see the moment his death was rolled into place."
Image: 123RF/studiostoks

Ken Barris has published several novels, a collection of short stories and poetry. His works include 'The Life of Worm & Other Misconceptions', 'Life Underwater', 'African Easter' and 'The Jailer's Book'.

In this short story about Covid-19, titled 'Open Wide and Speak, Memory', he imagines the very moment when a man contracts the virus:

In the 90 seconds between K's last exhalation and the actual moment of his death, he remembers a spray of droplets. They caught the yellow light slanting through the window into the surgery as they snowed around him, fatal starlight. His dentist had removed her mask for a moment and let it dangle round her throat. Why had she done that in the first place?

But was it in fact a sneeze? Or was she one of those miserable people who can't help spraying spittle as they talk? Hard to recall, in this fading light. He feels a terrible need to stop time, to clearly see the moment his death was rolled into place. Not that it will change anything now. So he panics, fighting against the melting of his life, panicking even worse than he did against drowning in his lungs.

She just had to tell him something about her trip to Italy, between picking at his teeth with her steel hook

Looking up at the dentist then, he felt a ripple of distaste, a surge of irritation. He was a fastidious man, very neat. Who was she to spit on him? She was a bloody garrulous old woman, maybe 70, long overdue for retirement.

And she just had to tell him something about her trip to Italy, between picking at his teeth with her steel hook and pressing his tongue out the way with her mirror. She had climbed, she said, the 600-year-old steps of the Duomo in Florence, and was extremely pleased with herself.

"Or was it the Duomo?" she asked aloud. "One of those magnificent cathedrals, anyway. We saw so many churches, I forget which one it was. But I climbed it very slowly."

She smiled at the thought, and began to replace her mask. Then she pulled it down again and added, "And then we had the most memorable pasta for lunch afterwards. We don't make it properly here, you know. We use it as a starch and drown it in the sauce, but the Italians use the sauce to flavour the pasta."

He felt a mixture of relief and annoyance as she put her mask back on.

He manages now, briefly, to stop time. Enough for him to see it distinctly: a fine drizzle of saliva droplets falling gently out of her prattling Duomo onto the piazza of his open mouth.

Definitely not a sneeze.

Now he can rest in the coming darkness. He feels safe now, relieved to understand that fatal point, the moment that triggered his end.

But there is one more memory.

She straightened up, removed her hook and mirror from his mouth, and mumbled something through the mask, which he didn't hear.

His mouth was tired from being stretched open. Mouths aren't designed to be kept open for minutes at a time, it's unnatural, and his jaw was stiff. He was thoroughly irritated with her.

She took the mask off again: "Everything's fine, K, no cavities. You have a good strong set of teeth. They'll last for years."

The acclaimed author imagines how the coronavirus pandemic will play out in her story, 'Toni's Touch'
Lifestyle
1 year ago