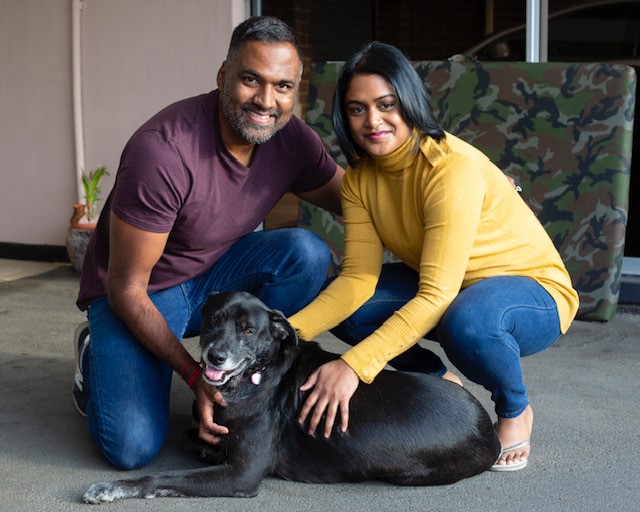 Newlyweds Rashen Naidoo and Lenisha Pakkiri Naidoo opened their home and hearts to Jett, who turned grey waiting for to be adopted.
Image: Rogan Ward

Jett is proof that every dog has its day — even if he turned grey waiting for that “pawfect” day to come.

The crossbreed canine had been to over 20 “adoption day” events in almost four years before he finally found his forever home two weeks ago.

“We received a call from a group of friends, who were at Woodview Park one night. They witnessed a Toyota Tazz speed into the park, throw this dog out of their moving car and drive away. The owners had dumped him,” she told TimesLIVE.

“He attempted to run after the car but they were too fast. He ran around so lost and confused, not knowing what he had done wrong and not even being able to comprehend that the family he would have given his life for had just discarded him like trash.”

Being part of Phoenix Animal Care & Treatment has always been a whirlwind adventure. There are so many highs and as many...

The rescue organisation then started to look for a home for Jett, but soon realised it was no easy task.

“He was always a gentle boy. He loves attention and he was one of the favourites with all our volunteers. We have no idea why people could not see what we saw and seeing animals sit in kennels for such long periods always baffles us. He attended so many adoption days held at schools, parks and malls but to no avail. He watched all his friends and numerous kennel buddies get homed but nobody ever chose him,” Naidoo explained.

Jett lived in rented kennels as PACT is still acquiring materials to build its own.

“We started to network Jett aggressively. If Jett was not able to find a home, it was only because we were failing him. We were his voice, we were his advocates and so we had to let people see what we saw. People from all over the country and various animal welfare organisations shared Jett's posts for a home. One day, we received a message: 'Hi, I am interested in adopting Jett.'

“By now, Jett had developed some hip issues due to his ageing and we had to disclose this information to the potential adopter. She was even more keen to adopt him as she said that he was not young and he had a hip problem and she wanted to give him a loving home to live out the rest of his days,” said Naidoo.

Lenisha Pakkiri Naidoo had been following Jett's story and his adoption posts since the first day that PACT had posted about him. 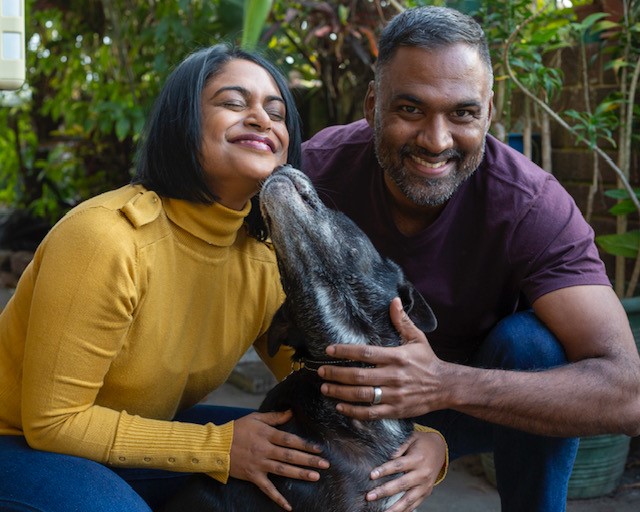 Jett has adapted to his new family and is soaking up the attention.
Image: Rogan Ward

“I always shared them in hope that someone would see it and want to give him the loving home and happy ending he deserves. I did not feel ready to do that at the time, because I had just lost my dog to cancer. I was still mourning that loss, so was my family. We felt that we couldn't go through that again.

“One day I saw a video that Neeri Naidoo had recorded and shared on the PACT Facebook page. It showed a sad and scared Jett who was so sad and confused as to why he was being driven back and returned to the kennels after an adoption day. He obviously didn't get 'picked' that day.”

She decided to do something about it in May this year.

“I thought to myself that I keep hoping for Jett to get his loving home, so I should be the one to do it. He touched my heart from the very first post about him being abandoned and he remained there for so long now. It just made sense for me to bring him home and give him the love, care and happiness that he deserves,” she said.

She said Jett has adapted well.

“He walked to our bedrooms to get some belly rubs and then ran around and played with us that first morning. Jett is so well-mannered and so loving. All he wants is hugs, cuddles and belly rubs. And he loves showing us his love and affection with cuddles and kisses. I also take time out every day to dance with Jett. He's my new favourite dance partner.”

Perseus the homeless cat has three new legs. Engineers and vets made his implants out of titanium and plastic paws through 3D printing technology.
News
1 week ago

A Gqeberha traffic chief saved the life of a puppy stuck in a drain in Motherwell on Monday, proving that it is not only cats that have several lives.
News
2 weeks ago

They nose what they’re doing: dogs to help pick up pace of long Covid queues

A Joburg petsitter robbed of clients by Covid-19 started filming her cats during lockdown. Now one is a soap star and another a world champion.
News
7 months ago