Young conductor Ofentse Pitse is taking up her own baton 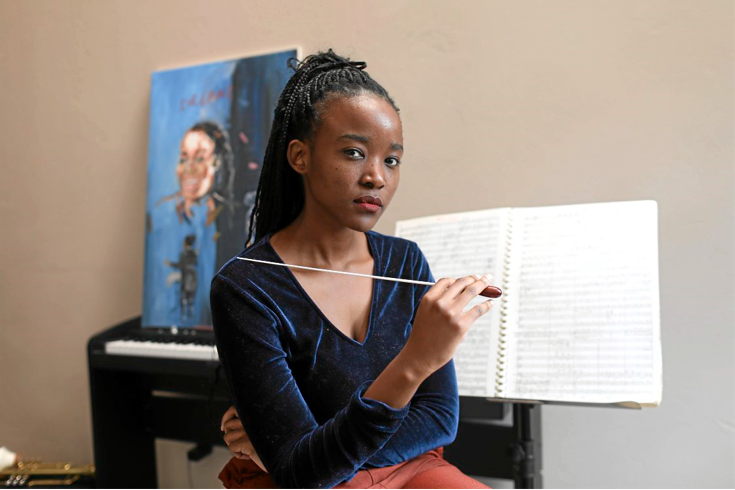 Ofentse Pitse is well on her way to becoming an accomplished conductor, and has put together an orchestra, 'Anchored Sound'.
Image: Alaister Russell

To say that Ofentse Pitse had an exemplary choirmaster when she was a child is putting it mildly. The man in question was none other than the late professor Mzilikazi Khumalo.

“He was very strict. He would be bent over, conducting with his big eyes. You could not be off beat or sound flat, or he would be shouting.”

This was at the Salvation Army in Soweto, where Pitse spent time as a child and Khumalo opened her ears to the wonders and rigour of music.

Today she has rented the original score of Khumalo’s celebrated opera with handwritten pencil annotations, to study as bedtime reading.

Lifting a baton in her apartment, near the old railway line in Braamfontein, she says: “My dream is to perform uShaka in the Sydney Opera House, not dressed in a tux but in designer MaXhosa. I want to walk barefoot onto the stage holding a baton.”

Growing up in Mabopane, north of Pretoria, Pitse’s second home was the Salvation Army church — with its choral and band traditions — where her grandmother was second-in-command at the Mabopane corps.

“First, I learnt the C scale on the trumpet and played it until my lips were swollen, but I went back for every rehearsal.”

She also learnt the flugelhorn, the English horn, trumpet and cornet in the church band and now has a piano at home, which she is also learning to play.

Pitse longed to take music as a subject at school but students were required to own their own instrument and she didn’t have the money to buy any.

“They had an elitist music department. Once I walked past and wanted to touch the grand piano and a prefect told me: ‘You shouldn’t be here. You can’t afford to be in this space.’ ”

That attitude spurred Pitse to found Anchored Sound. “Just because you come from a long-drop toilet system does not mean you cannot afford to have access to classical music,” she says. “I was good at art so I did that, but I was always gazing at the music department. I didn’t even tell my mother because I knew she couldn’t afford it,” says Pitse, who was very close to her late mother, Pearl Matshidiso. 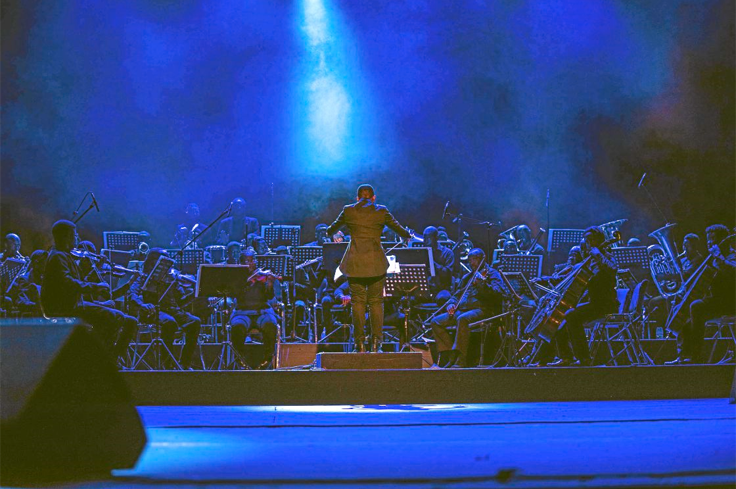 Her mother was a third-generation teacher. “From her I learnt discipline. You wake up and make your bed,” says the young trailblazer, who rises with a 5am alarm every morning. Some days simply to study a score.

When she stayed with her mother, Pitse says: “I would wake up with an idea and jump onto her bed and say, ‘Yoh ma, mamela (listen)’ ... she always supported me in my endeavours.”

Her grandfather, Otto, was a jazz musician who died when Pitse was two and she feels they are kindred spirits. “Our clan has an elephant (Tlou) spirit and I feel I have taken on that power.”

Even as a baby she got immersed in music at her mother’s kitchen parties with friends. “There was always food and music. The Temptations, Aretha Franklin, The Spinners ... I would be listening to these rhythms from my pillow.”

As she grew older she would be humming rhythms in the kitchen. “I would see my mother looking at me with a smile, saying: ‘Doors are going to open.’ ”

In 2017 she graduated from Wits University with a bachelor of architecture degree, but music remained her first love.

She was turning 25 and thought: “What do I want to do? Go to a club? No. Go hiking, mountain biking? I’ve done that. Face painting? I’ve done that. Let me start making sound ... ” Pitse approached soloists who had stood out at choir competitions on the East Rand.

“I wondered how these kids from Katlehong were able to project a B natural like Pavarotti and I would speak to them.”

On her birthday a group of them met for a jam session at a church that had a piano. “They were young and on fire. I sat at the back hearing these harmonies and thought: ‘OK, here’s my assignment!’

“They wanted a platform to perform and I had the skills and knowledge of who to contact, so I registered Anchored Sound as a company,” says Pitse, whose salary helps support them.

“At one Saturday choir rehearsal, a member asked: ‘Can I come through with my trumpet?’. He jazzed it up and the next week his friends joined with a tuba, a trombone and another trumpet. They were followed by a violinist.” 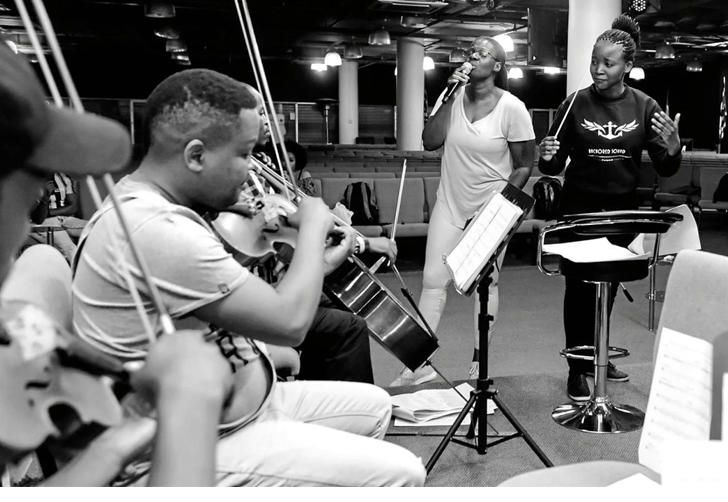 Ofentse Pitse, far right, rehearsing a number with her orchestra ensemble and with award-winning singer Judith Sephuma beside her.
Image: Supplied

From rehearsals at a Katlehong school the orchestra came to life, expanding to 32 members on string, percussion, brass and woodwind instruments. “As soon as I saw them and their instruments, I got really nervous,” says Pitse, putting her hands to her temples. “ ‘Who am I to lead these people?’ I thought. But I saw at church how the Mkhulu (Khumalo) conducted so I went for it.”

Orchestral conductor Gerrit Grooten — a seasoned professional who has performed worldwide — was intrigued by what Pitse had accomplished without formal teaching and began coaching her early in 2020, which he still does at least once a week.

He says: “Most conductors come to me through the normal channels after a career in the professional world but she was completely left field: a trumpet player with an architectural degree.”

Her immense “raw talent and raw passion” and unique vision, to lead an African orchestra, were irresistible.

“Ofentse has had an upside-down journey. It was a mystery to me how far she had got without any lessons,” says Grooten, who at the time was conducting the Pretoria Symphony Orchestra, the Pretoria Bach Choir and the South African New Music Ensemble. “It is quite a miracle.

“She had already worked with professional orchestras and choirs and drawn the attention of good musicians. She had success performing in the Mandela Theatre. She is truly a pioneer, doing what has never been done before.”

Thami Zungu, the vocal arts director and conductor at Tshwane University of Technology’s performing arts department, praises her power to bring musicians together.

“We do not have many female conductors and she is very brave and passionate about the art form.” Within a year, Anchored Sound sang on stage at the Gauteng Youth Expo and in 2019 her orchestra ensemble performed with award-winning singer Judith Sephuma.

They also performed Khumalo’s uShaka KaSenzangakhona and Princess Magogo at the Joburg Theatre.

To prepare for this epic, Zungu helped Pitse to develop conducting technique. “We were also analysing the score and paying attention to details,” he says. “It was nerve-racking,” remembers Pitse, who went ahead with the performance despite sponsorship difficulties. “We had a theatre to realise our dreams and that evening was pure magic.” 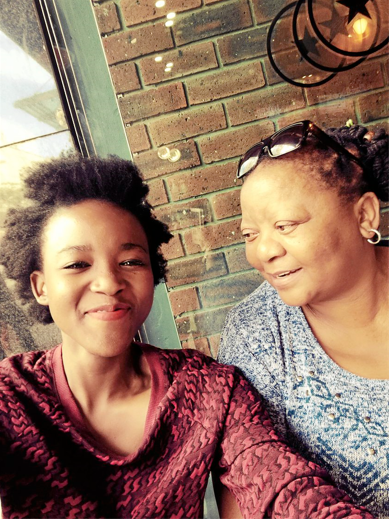 Ofentse Pitse with her mother, Pearl Matshidiso, who, she says, taught her discipline and supported her through thick and thin.
Image: Supplied

Pitse pays attention to every detail of the conductor’s role and presence. “If you are conducting the 1812 Overture by Tchaikovsky you come on stage like this,” she says, striding forward grandly. For Bohemian Rhapsody, she would have more of a Freddie Mercury strut. “We have to spend a lot of time looking at ourselves in mirrors and it humbles you,” she says.

Even the slender Pitse is not immune to wondering if she looks fat in jeans. For a conductor she is short at 1.6m, which influences her movements on stage. “I have to make things look bigger, without being extreme,” she says.

With only two years’ experience before Covid-19 hit, Pitse considers herself an apprentice and is using this pause on performances to put in as many hours of practise as possible.

“As young as she is, even with no training, she has done all the things unknowingly that make a great conductor,” says Grooten.

“Conducting is not selfish. It is about serving the orchestra, serving the community of the arts and the wider community,” he says. Pitse strives to be the best. “The Kumbaya version of Africa needs to stop. I want to put Africa and the arts on a prestigious table.” For now the pandemic has upended her ambitions.

“Covid-19 has left me undone. Creatively it’s been extremely hard to dream because of how dire things look in the world,” she says, but working on incredible scores with Grooten has kept her hopeful.

When the pandemic is over, it will be time for regeneration, says Pitse, referencing the New World Symphony that Dvorák wrote in 1893. And until that day, every day, she will be striking the air with her baton. “You have to polish before you can shine.”

Chris Barron pays tribute to the nation’s choirmaster, Mzilikazi Khumalo, who brought together five languages in an anthem for a new democracy
Opinion & Analysis
10 months ago