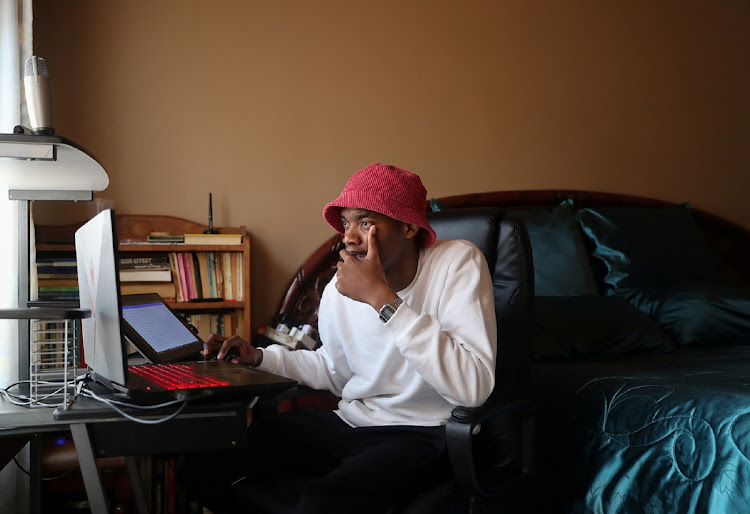 Lwazi Msipha, an animation artist, works on his cartoon show 'My Cartoon Friend' at his home in Johannesburg.
Image: Sumaya Hisham/Reuters

Self-taught South African 3D animator Lwazi Msipha wanted to create something for grown-ups and children, along the lines of The Simpsons, when he dreamed up the character that won him a coveted slot on satellite TV.

He hit on an idea: what if his children's cartoon character were to accidentally get stuck in the adult real world?

That notion forms the premise of My Cartoon Friend, which debuted on Cartoon Network in SA last month. Msipha is the first of his compatriots to get a full 13-episode series.

In the new show, Msipha plays himself as a young animator experimenting with new software when he accidentally exports his creation into the real world.

He is then stuck with Themba, his feisty, sharp-tongued animation, who he must accommodate into his life, and this proves challenging.

He hopes to help grow SA’s nascent animation industry and attract talented upstarts to join in.

From zero to superhero: African animation takes off internationally

Animation in Africa is having a moment as global initiatives, along with interest from big hitters such as Netflix and Disney, bring new opportunities
Lifestyle
2 months ago

Changing the face of animation: SA's stars are rising — and they're female

Bridges of opportunity: Animation initiative a boost for African artists

As demand for African content grows, this new collab links local talent with international mentors and creates platforms where emerging stars can ...
Lifestyle
2 months ago

Claudio Pavan has combined his two passions, cycling and animation, to create hugely popular Ion Göttlich - who's been invited as a commentator on ...
Lifestyle
2 years ago