As Daniel Craig gives his final performance as 007 in 'No Time To Die', we look at the role that has consumed actors for decades 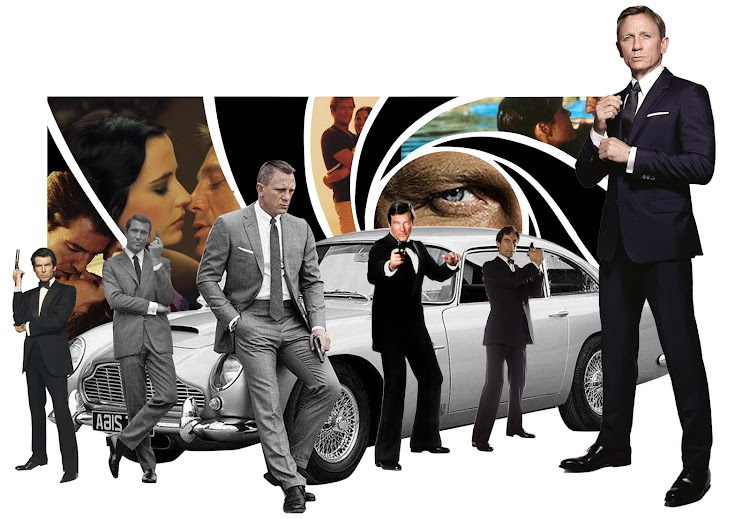 With the exception of George Lazenby, all other Bond actors have been dealt crappy hands when it comes to their swan songs. Will the same be true for Daniel Craig?
Image: Siphu Gqwetha

In 1962, two years before his death, James Bond creator Ian Fleming took the New Yorker out to lunch and told the magazine's writer Geoffrey Hellman: "When I wrote the first one, in 1953, I wanted Bond to be an extremely dull, uninteresting man to whom things happened; I wanted him to be the blunt instrument.

"One of the bibles of my youth was Birds of the West Indies, by James Bond, a well-known ornithologist, and when I was casting about for a name for my protagonist I thought, My God, that's the dullest name I've ever heard, so I appropriated it. Now the dullest name in the world has become an exciting one. Mrs Bond once wrote me a letter thanking me for using it."

That year, 1962, was also the year Scottish actor Sean Connery, who Fleming memorably derided as "a ditch digger", made his first appearance as the on-screen incarnation of Fleming's international man of mystery, in Dr No.

Connery, who died last year, remains for many the unbeatable embodiment of 007. He would go on to star in another four successive Bond films, which laid the foundation for what's now the sixth-biggest franchise in movie history.

He left the series after 1967's You Only Live Twice, only to resurrect his role for a sixth and final appearance in the ill-advised but well-compensated Diamonds are Forever in 1971 - following the single Bond appearance of Australian George Lazenby in On Her Majesty's Secret Service in 1969.

Fleming did not live to see the juggernaut the Bond franchise has become and one can presume he would have been unimpressed by the arch tongue-in-cheek high jinks that characterised the reign of Roger Moore, who made a record seven outings as 007 beginning with Live and Let Die in 1973 and ending with A View to a Kill in 1985.

Though fans were at the time lukewarm in their reception to the angrier, more brutish and somewhat dour late Cold War introspection of Timothy Dalton, later generations of Bond geeks have elevated his performance to one that may have been more in keeping with Fleming's original "blunt instrument".

Dalton was not the first choice to be the Bond of the mid to late '80s. That honour had fallen to swarthy Irishman Pierce Brosnan, who'd been cast in the role but had to drop out.

Six years after Dalton made his second and final appearance as Bond in 1989's Licence to Kill, Brosnan returned to claim the role that many felt was rightfully his for a new era of hi-tech, big-budget, globe-spanning, over-the-top pyrotechnic-filled Bond films that began with Golden Eye in 1995 and ended with Die Another Day in 2002 - at that time the biggest-grossing film in the franchise's history and Brosnan's fourth appearance in the role.

In the Bond novels, James Bond smoked 70 cigarettes a day. The last time Bond smoked onscreen was in 'Die
Another Day', when Pierce Brosnan toked on a fat cigar. - NME

But if there was an era to make Fleming turn in his grave even more restlessly, it was the slash-and-burn tenure of Brosnan, notable for its departure from Fleming's novels and short stories as source material.

The Brosnan films never quite managed to catch up to the times that were tumultuously changing in the real world. One could argue that it was only in the Connery era, when the sweeping changes to society that Fleming had begun to see in the novels in the '50s were beginning to be reflected in the swinging '60s, that the Bond franchise actually reflected the zeitgeist of its era, rather than having to justify its existence in response to it.

That somewhat explains why the films began to rely on implausible technological gadgets and spectacular explosions to keep the attention of an audience increasingly distracted by the turmoil of the real world.

The only concession made to changing times was the introduction of Judi Dench as M, but other than that things in the Bond universe remained steadfastly self-obsessed.

After celebrating its 40th anniversary in 2002, the franchise took a break for six years to recalibrate and work out how to compete in an action universe that now included the existential angst and moral soul-searching of blockbusting heroes such as Jason Bourne, whose personal narrative anchored his high-octane international adventures. These were filmed in a rough and ready documentary style, free of luxury product placement and glossy destination tourism.

The Bourne franchise was undoubtedly a descendant of Fleming's creation but it was also something very different.

That was until 2006, when Bond re-emerged, guided by the dourly non-smiling, square-jawed facade of Daniel Craig. His blue eyes didn't twinkle with the arch in-joke knowingness of Moore but rather with a piercing existential gloom.

He would front the return to a Bond who was the blunt instrument and noirish, internally conflicted sadist of Fleming's original creation, but also a man wracked with PTSD and a need to explore the personal and childhood traumas that had made him the world's implacably English and increasingly unamused last line of defence.

Craig debuted with Casino Royale, a critically acclaimed serious action drama that fleshed out the character of Bond and stayed predominantly faithful to the novel that had marked the character's debut in 1953.

His Bond has since made some significant inroads in dealing with the cringey misogyny, racism and xenophobia that were part of Fleming's world view as an upper-class establishment Englishman living through the last days of British imperialism, bitterly swilling martinis as he watched the Empire crumble around him in the post-war era.

A female 007 who calls out James Bond for his misogynist mentality could feature in the next instalment of hit movie franchise, if plot leaks are to ...
Lifestyle
2 years ago

Craig's 2012 outing Skyfall, directed by Oscar-winner Sam Mendes, was perhaps a highlight in Bond screen history. With its tragic conclusion and the blowing up of 007's ancestral Scottish home, it seemed to offer a neat conclusion to the franchise and a narratively satisfying end to the story of Bond, perfectly timed for its 50th anniversary. It also became the highest-grossing film in Bond history and the first to gross over $1bn.

But, like 007 himself, the Bond franchise never knows quite when to quit and Mendes and Craig reunited for 2015's spectacle-over-substance Spectre, a profitable but unmemorable yawn-fest that led Craig to declare that he'd rather "slit his own wrists" than ever make another Bond film.

Cut to last week and the carefully timed release of a video clip from the set of what will now be Craig's definite final Bond film, No Time to Die, originally scheduled for release early last year but perpetually rescheduled in the uncertainty of the Covid-19 pandemic.

In it, a tearful Craig, dressed in his signature body-hugging tuxedo, tells the crew of the Cary Joji Fukunaga-directed 25th official James Bond film, "I know there's a lot of things said about what I think about these films or all of those, whatever ... but I've loved every single second of these movies, and especially this one, because I've gotten up every morning and I've had the chance to work with you guys. And that has been one of the greatest honours of my life."

It may seem that the producers of No Time to Die are missing a trick by not holding out a little longer for a release next year that would coincide with the 60th anniversary of the franchise, but you can also see why they're eager to finally let the film loose on a world that tentatively seems to be making a return to cinemas.

The release will also mark the biggest tent-pole film to land since the onset of the pandemic and its reception and box office will be keenly watched by other producers of major blockbusters who view Bond 25 as a litmus test for their own releases.

As it did in the 1960s under Connery, Bond once again leads the way.

Craig can be reasonably proud to have been part of a significant era in Bond history, where the films have made more of an effort than at any previous time to address some of the concerns of the real world, in particular with regard to diversity, representation and the portrayal of women. He can also lay claim to being the most bankable Bond, thanks to the success of Skyfall.

Whether or not he manages to overcome the curse of all previous Bonds - whose final films have been their least impressive - remains to be seen. With the exception of Lazenby, who made only one appearance in what is one of the better films in the franchise, all other Bond actors have been dealt crappy hands when it comes to their swan songs.

WATCH | The trailer for 'No Time To Die'

What we do know about No Time to Die - and because of the need to keep interest in the film through all the drama of its release nightmare we know more than enough - is that it will mark a potentially important first in Bond history thanks to the casting of black British actress Lashana Lynch, who takes over Bond's 007 number during his self-imposed exile from the service in the early stages of the story.

There's even a behind-bars cameo for Christoph Waltz's master villain Ernst Stavro Blofeld from Spectre. The song, if you haven't already heard it, is by Billie Eilish; the car is once again the classic Aston Martin DB5 and the action all starts in Jamaica, the home of Fleming's legendary Golden Eye estate, where he first sat down in 1952 and in one furious month bashed out the manuscript of Casino Royale.

LISTEN | 'No Time To Die', the theme song for the 25th James Bond film of the same name is performed by Billie Eilish

At the end of that 1962 lunch with the New Yorker, Fleming pondered that the reason for his character's success was perhaps that "people are lacking in heroes in real life today".

He didn't "regard James Bond precisely as a hero", but he did believe that, at least, "he does get on and do his duty, in an extremely corny way and, in the end, after giant despair, he wins the girl or the jackpot or whatever it may be. My books have no social significance, except a deleterious one; they're considered to have too much violence and too much sex. But all history has that."

As the films now inevitably move into a new era, it's perhaps time Bond made a real change with the times and took the kind of uncertain bet that producer Cubby Broccoli took on Connery - casting someone in the role who will mean something to a new generation more acutely aware of the social inequities and systematic injustices that allowed for the circumstances of his creation in the first place.

It won't, by all accounts, be the much-hoped-for Idris Elba, but it needs to be more than just a younger Daniel Craig.

Simple recipes for cocktails made famous by Bond movies including an old-fashioned, daiquiri and, of course, a dry martini
Lifestyle
2 years ago

Donald Trump should be the next Bond villain

Through decades of the 007 film franchise, Bond baddies have been shallow caricatures of whatever keeps us up at night, which makes the next one ...
Lifestyle
2 years ago