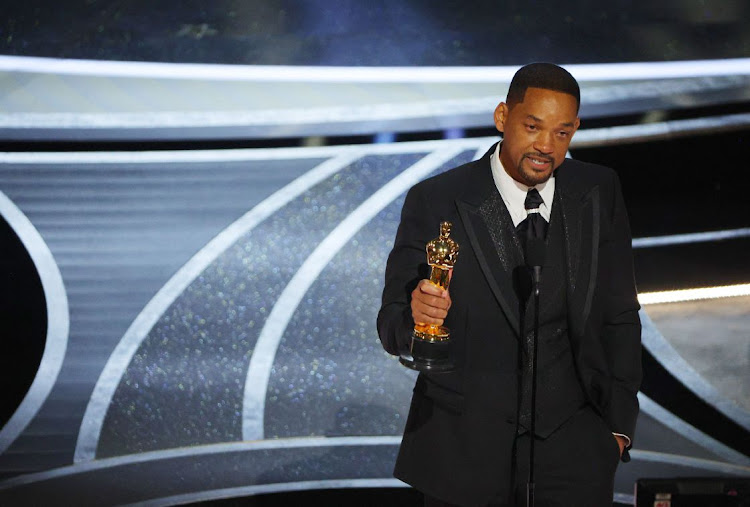 Heartwarming movie CODA, about a deaf family with a hearing daughter, won the prestigious best picture prize at the Oscars on Sunday, the first time a streaming service took home the film industry's biggest prize.

CODA was released by Apple TV+, which beat Netflix Inc's contender The Power of the Dog and other entries from traditional Hollywood studios.

"I really want to thank the academy for recognizing a movie of love and family at this difficult time that we need today," producer Patrick Wachsberger said in front of the film's cast stood on stage.

The upbeat atmosphere was disrupted when best actor winner Will Smith slapped presenter Chris Rock onstage over a joke about the actor's wife, Jada Pinkett Smith.

Smith, who is nominated for best actor for King Richard, slapped Rock in what at first appeared to be a scripted joke.

But the theatre turned sombre moments later when Smith, back in his seat, shouted back, “Keep my wife's name out of your f**king mouth.” Smith's comment was silenced during the live US broadcast on Walt Disney Co's ABC.

Smith later apologized to the Academy of Motion Picture Arts and Sciences and to his fellow nominees as he tearfully accepted the Oscar for best actor for playing the father of Venus and Serena Williams in King Richard.

"Richard Williams was a fierce defender of his family," Smith said. And the last thing he said before he took his seat was: "I hope the Academy invites me back."

The proceedings resumed with awards, including the one for Jane Campion for dark Western Power of the Dog. She became just the third woman in the 94-year history of the Oscars to win best director.

“Thank you academy. It's certainly a lifetime honour,” she said as she accepted her award.

Troy Kotsur made history as the first deaf man to win an Oscar, earning best supporting actor for his role in CODA, an acronym for “child of deaf adults.”

Kotsur played Frank Rossi, the father of a teenager who struggles to help her family's fishing business while pursuing her own aspirations in music.

“This is amazing to be here on this journey. I cannot believe I am here,” Kotsur said in a heartfelt speech delivered in sign language as he accepted the supporting actor honour.

“This is dedicated to the deaf community, the CODA community and the disabled community. This is our moment,” he added.

The only other deaf person to win an Oscar was Kotsur's CODA co-star Marlee Matlin. She won best actress for her role in 1986 romantic drama Children of a Lesser God”.

Supporting actress went to Ariana DeBose for playing the spirited Anita, who sings America in Steven Spielberg's remake of West Side Story.

As she held her gold statuette, the Afro-Latina actress asked the audience to imagine her as a young girl “in the back seat of a white Ford Focus.”

“You see a queer, openly queer Latina, who found her strength in life through art. And that’s what we’re here to celebrate,” she said.

“So, anybody who's ever questioned your identity. Or find yourself living in the grey spaces, I promise you this: There is indeed a place for us,” she added, referencing the moving song from West Side Story.

DeBose also thanked “divine inspiration” Rita Moreno, who earned the best supporting actress award in 1962 for playing Anita in the original movie version of the musical.

Beyoncé opened the show by performing Be Alive, an Oscar-nominated song from the movie King Richard, about the father of tennis stars Venus and Serena Williams from a tennis court in the sisters' hometown of Compton, California.

After going three years without a host, a trio was chosen to guide Sunday's ceremony: Amy Schumer, Regina Hall and Wanda Sykes.

“This year, the Oscars hired three women to host because it's cheaper than hiring one man,” Schumer joked.

“And for you people in Florida, we’re going to have a gay night,” added openly gay Sykes, referring to legislation in the state that limits LGBTQ discussion in schools and has been labelled by critics in Hollywood and elsewhere as the “Don't Say Gay” bill.

The show briefly acknowledged Russia's invasion of Ukraine, which has killed thousands and driven a quarter of Ukraine's 44 million people from their homes.

“Recent global events have left many of us feeling gutted,” said actor Mila Kunis, who was born in Ukraine. “Yet when you witness the strength and dignity of those facing such devastation, it's impossible not to be moved by their resilience.”

Jessica Chastain, Nicole Kidman and other nominees donned a rainbow of colours for a ceremony with 2,500 gown- and tuxedo-clad attendees and free from last year's pandemic restrictions that led to a scaled-down ceremony in a train station.

BEST DIRECTOR: Jane Campion - The Power of the Dog

‘To every person who has ever bought a movie ticket, thank you’

Oscars weekend kicks off with honours for Samuel L Jackson, Danny Glover, Elaine May and Liv Ullmann
Lifestyle
3 months ago

'The Power of the Dog' and 'Dune' lead nominations.
Lifestyle
3 months ago