Could a comforting bowl of chicken soup help to treat Covid-19?

This nourishing broth has long been said to have medicinal value, hence its nickname: 'Jewish penicillin' 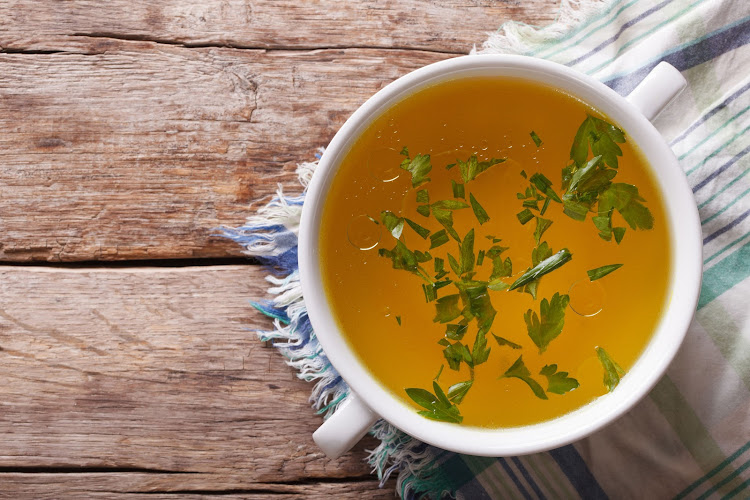 Chicken soup, often made by a lengthy and loving process, can provide real psychosocial support to those who are sick, say the authors of a study on its potential anti-inflammatory effects.
Image: 123RF/Sergii Koval

It is a commonly held belief that one of the best foods to eat when you have a cold is chicken soup: a bowl of warm, soothing, comforting deliciousness. Some even believe the nourishing broth may potentially have medicinal effects, hence its nickname: “Jewish penicillin”.

It is unsurprising that people have tried to make a connection between chicken soup and Covid-19, given the assumption that it is effective to treat cold symptoms, many of which are similar to Covid-19 symptoms. These may include, but are not limited to, extreme fatigue, fever, a dry cough, aches and pains, headaches, a sore throat and a loss of taste or smell.

Some articles have even quoted a study published in the journal Chest in 2000 in which the authors investigated the potential anti-inflammatory effect of chicken soup in patients with colds.

According to the original journal article, chicken soup was shown to modestly inhibit neutrophil migration which, it was claimed, could result in an anti-inflammatory effect and lessen symptoms associated with colds.

Covid causes ginger price spike, but can this root really ward off the virus?

Last year, the same authors published an article in which they said their initial study was speculative and cautioned against citing their findings “beyond the scientific significance of the results”. They further said the study was not a clinical trial and no definitive conclusions could be drawn.

According to Marc Mendelson, a professor of infectious diseases at the University of Cape Town, chicken soup has no use as a “drug” to treat Covid-19.

“A minuscule study (not in Covid-19) that showed an effect on neutrophil migration is irrelevant,” he says, referring to the original journal article published in 2000.

He agrees with the authors, who write in their 2020 article: “Of course, chicken soup has benefits beyond its potential medicinal value. Chicken soup, often made by a lengthy and loving process, can provide real psychosocial support. The mechanisms by which such support makes people feel better are complex and incompletely explored, but there is little doubt about their benefit, including during humanitarian crises.”

Can a steamy bowl of chicken soup really get rid of that pesky cold?

Most of our grandmothers would definitely say 'yes', but what does the science say?
Lifestyle
2 years ago

That is not to say there is no benefit at all to eating chicken soup when you are sick.

According to Julie Perks, a registered dietitian and Association for Dietetics in SA spokesperson, a chicken noodle soup made using basics such as chicken on the bone, celery, carrots, onion, garlic and noodles can be a nutritious, balanced meal.

“Because it is a complete meal and the ingredients within the soup have additional benefits, they might assist the body in having the right nutrients to heal itself,” she says.

She says foods such as onion and garlic both have antibiotic properties which help the body fight infection and the soup can be a good source of hydration. She encourages people to add as many varieties of vegetables to their soups as they please.

Perks says while there is a benefit to eating chicken noodle soup when you are ill — whether it’s because of a cold or Covid-19 — it is important to remember it is not a cure.

“It should be used in conjunction with a balanced, healthy and nutritious diet, medication where necessary and seeking medical attention when needed,” she says.

Get more than your 5 a Day in a single bowl! Packed with an array of fresh produces from pumpkin and spinach to leeks and corn, organic farmer Janet ...
Lifestyle
6 years ago

This filling soup is a winter favourite. Best of all, it's budget-friendly too
Lifestyle
3 years ago