Once the city's most notorious address, Ponte City, is now a happy home to thousands with a heart-warming community centre and views for days, writes Sanet Oberholzer 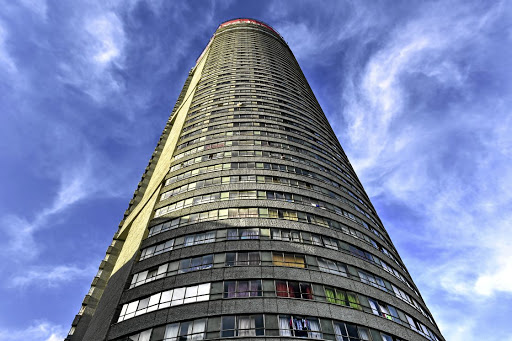 Note: This article was first published when SA was in lockdown level 3.

One thing of which I was always guaranteed in the days before Covid-19 was the sight of the Joburg skyline: Ponte City to my left and the Hillbrow Tower to my right as I sat in traffic en route to the office.

When tour guides were allowed to start operating last month, I decided it was time to solve one mystery I'd always pondered during these morning commutes: what lies at the bottom of the infamous Ponte Tower?

In 2012, journalist Nickolaus Bauer was sent there to write a stereotypical article about the building and its problems of crime, drugs, gangs and prostitution. When he asked on what floor he might find the drug pedlars and gangsters, the residents laughed at him. Discovering, instead, a well-functioning residential building, he decided to abandon his small digs in Maboneng for a penthouse apartment on the 51st floor of Ponte City for R4,500 a month.

Travel ban got you down? The great lockdown loophole is that you are allowed to hike. Here are some easy-to-reach, great-outdoors options for ...
Lifestyle
1 year ago

After moving in, Bauer decided to embark on a business venture with his partner, Michael Luptak. They started a games arcade in the building called Dlala Nje, which means "just play" in isiZulu. After a lucrative start, the children realised they could use Zimbabwean coins in the machines and the men's revenue started drying up.

Initially the tours attracted mostly foreign visitors but by the time the pandemic hit our shores in March, Bauer says this had changed to about 60% foreigners, 40% locals.

As for the community centre, when they decided to cease operations before SA went into lockdown out of concern for the health of the building's residents and the community, they had 140 kids registered for after-school activities.

"Our community centres [there is one for kids and one for teens] provide a lifeline for children in Ponte and the suburbs of Hillbrow, Berea and Yeoville," says Bauer. "We provide a safe space for kids to be kids ... to play, someone to help with their homework, an opportunity to experience things like yoga or pantsula or judo and, most importantly, somewhere to dream about their future."

Bauer says the pandemic has been devastating for Dlala Nje.

"Our tours have been put into a coma, which means our funding has dried up. We've had 20,000 people come on our tours since 2012 and it has helped our centre and impacted hundreds of young lives," says Bauer.

Without people coming on tours, the team is unsure how long they can keep the centre running, which is why they will be launching a 360° virtual reality tour of their flagship "This is Hillbrow" tour this month.

But for those who are eager to get out and explore - and discover the secrets of Ponte - they are once again running their Ponte City Experience tour.

A VIEW FOR DAYS

Guide Gilbert Mwape meets me at the entrance to Ponte. We start at the community centre before Mwape leads the way into Ponte City. Residents gain access using a biometric security system and guests are required to show their ID when they sign in.

"I'm your passport," Mwape says, indicating to the security guards that I come in peace.

Dlala Nje's events space is on the 51st floor, the bottom floor of a three-storey penthouse that was reserved for the créme de la créme in Ponte's glory days of the 1970s and early '80s.

On tours, visitors are treated to the view while enjoying a drink. Under normal circumstances the space is also available to rent for private functions. 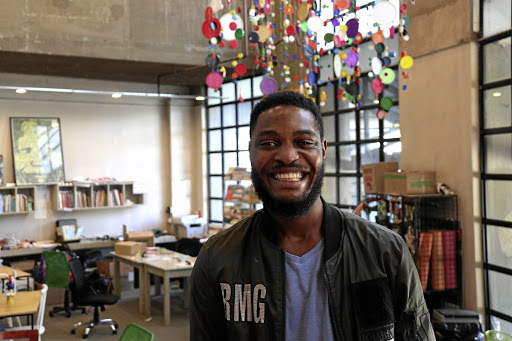 The view is spectacular. Clothes lines are spun across rooftops and satellite dishes stick to the sides of buildings like a covering of moss between slits of windows. It's Hillbrow to our left, Yeoville to the right, Berea at our feet and the opulence of Rosebank and Sandton in the distance. On a clear day, Mwape says, you can see the Unisa building in Pretoria.

Over a cup of coffee, he dives into the spectacularly messy history of this building and its dire reputation in the late '90s.

"People used to tell their kids that if they didn't do well at school they'd end up at Ponte. If you lived in the building, it meant you'd failed in life," Mwape says.

Jozi's abandoned Carlton Hotel was once super luxe. Now it looks like this

"If you were looking for guns, drugs or prostitutes, you'd find them there. That's how it used to be in the building."

At face value, the answer to my question is boring: there's nothing at the bottom of Ponte's circular body. But if you take a moment to listen there are layers and layers of stories to be told.

At the peak of the building's lawlessness, residents - with no running water or basic sanitation and lifts that didn't work - would dump their trash into Ponte's dark belly. Eventually the litter had piled up as high as the 14th floor. People living on floors below were climbing the stairs to dump their trash onto the rubbish heap.

In 2001, owners The Kempston Group decided to bring the building back from oblivion. It took 18 months to remove the giant pile of rubbish manually and it's rumoured that they even found bodies in the heap. For a building once referred to as "suicide central", it doesn't seem like too much of a stretch.

After years of renovation, Ponte was eventually restored to what it is today. With shops operating at the foot of the building, children chatting in the corridors and young professionals passing through, it's a far cry from what it once was.

The concrete heap at the bottom of the building's seven-level parking lot has even served as the setting for a few movies and a Drake music video.

It seems that one of the biggest crimes committed here in recent years was the filming of the sci-fi flop Chappie - in which Die Antwoord duo Yolandi Visser and Ninja decide to kidnap a police robot, reprogramme it and treat it like their own child.

It's one part of Ponte's history that's not worth revisiting.

The 90-minute Ponte City Experience tour is R300 for a public tour booked through the website and R350 for a private tour booked directly. Capped at five people per tour, they are available on Mondays, Thursdays, Saturdays and Sundays. The 25-minute virtual Hillbrow tour is R250 for 24-hour access via a URL. See dlalanje.org.

• Oberholzer was a guest of Dlala Nje.

1975: The building opens. At 173m it is hailed "the tallest residential building in Africa". 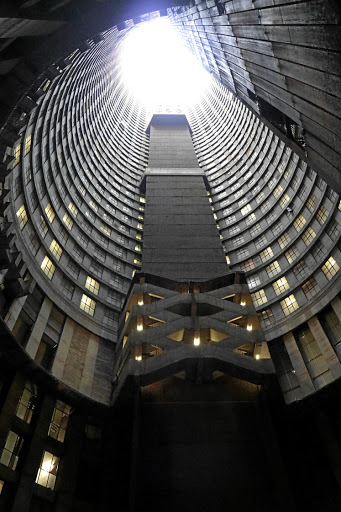 The empty centre was designed to allow more light into the building.
Image: DlalaNje.org

1985: Berea, Hillbrow and Yeoville are labelled "grey areas" after black and white people are found living side by side. The Group Areas Act is eventually repealed in 1991 but isn't really enforced in the late 1980s, especially in Hillbrow.

MID-1980s: Investment and maintenance in the suburb have dried up, leading to an exodus of middle-class residents and building decay.

EARLY 1990s: The Kempston Group acquires the building because the previous owner, Samuel Ponte, can't service a debt he owes.

1998: The department of correctional services has ideas of turning the building into a prison but this doesn't materialise.

2001: Elma and Danie Collier, a husband and wife management team, are tasked to bring the building back from oblivion. With the help of the Red Ants, they clear out the illegal residents over a period of three years.

2002: The building is declared a vertical urban slum, with about 10,000 people living there without water and basic sanitation.

2007: Two foreign investors, David Selvan and Noor Ayoub, with their eye on opportunities relating to the 2010 Fifa World Cup, start a big renovation project to turn Ponte into a luxury-apartment building.

2008: The foreign investors leave amid the global financial crisis and growing xenophobic tensions without completing the renovations they started.

2009: The Kempston Group takes over the renovations.

2012: Renovations are completed, although the building continuously requires care and maintenance.

Lockdown travel rules: can I go on holiday if I don't leave my province?

After much confusion, government regulations regarding leisure travel in advanced level 3 are clear.
Lifestyle
1 year ago

After weeks spent indoors, even those people who aren't typically avid hikers are dusting off their tekkies, eager to immerse themselves in the great ...
Lifestyle
1 year ago