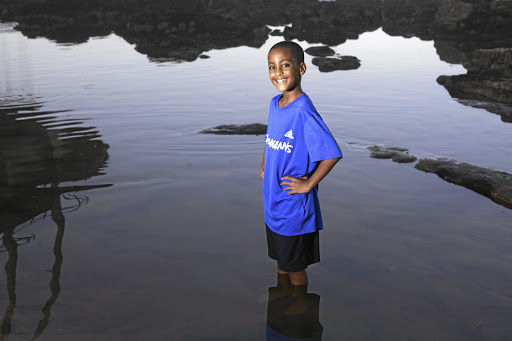 Grade 4 eco-activist Romario Valentine would rather be cleaning plastic off a beach or planting trees than doing almost anything else.
Image: Rogan Ward

All Romario Valentine wants for his 10th birthday is to help provide a safe haven for endangered African grey parrots and to plant trees to save the environment.

The grade 4 boy from Umhlanga in KwaZulu-Natal has been spurning birthday gifts for years to focus on bird and marine conservation, climate change and deforestation.

Romario, whose birthday is in two weeks, has again decided to forgo presents and instead wants to raise R30,000 on crowd-funding platform Backabuddy to support two environmental charities.

With the help of his mother, Delsha Moodley, Romario's campaign has raised more than R12,500 so far. Some of the cash will help to complete an aviary for abandoned African grey parrots at Birds of Eden in Plettenberg Bay, and the rest will help the Zeitz Foundation to achieve its goal of planting 1-million acacia trees over the next decade to mitigate the effects of climate change.

Filmmakers spent nearly a year shacked up with penguins in Cape Town to showcase the plucky seabirds. But is it too late?
Lifestyle
1 year ago

The youngster made headlines a year ago when he raised more than R30,000 to support the Umgeni River Bird Park in Durban.

A beach clean-up with his mom when he was six, as well as a school play in which he played the part of an orca, ignited Romario's passion for the environment and he has since completed 150 beach clean-ups.

"I have always cared for nature and our planet. When I was six years old I discovered that orcas were endangered and I decided to do something about it by cleaning the beach weekly," he said. "My mother was the first person to clean the beach with me."

"I want to encourage children to plant trees, do not litter, recycle, reuse and only buy things you need. Let's work together to save our beautiful planet."

Last September, Romario became the youngest ambassador for Ocean Sole, a Kenyan company that recycles flip-flops washed ashore on the beach and transforms them into marine and wildlife sculptures.

And last month he was selected by the UN Convention to Combat Desertification to highlight climate change and land degradation at a desertification and drought day.

Moodley said Romario was on a mission. "As parents, we are honoured to have such a humble, visionary son. Romario has been passionate about the environment and wildlife for several years," she said.

"We will continue to support him the best way we can. We are grateful to everyone who has supported his campaigns and his environmental journey to date."

Romario hopes one day he will see an international children's tree-planting day, "where world leaders and tree organisations team up with schools and communities" to plant trees.

"Getting children involved in reforestation programmes from a young age will help them become better citizens for the environment and slow down global warming," he said.

Conservationists are using penguin "dummies" and fake penguin broadcasts in an attempt to convince African penguins to settle at De Hoop Nature ...
News
1 year ago

From a walking sea safari to snorkeling with seals, there are many ways you can have an unforgettable encounter with our country's marine life
Lifestyle
1 year ago

The moss shoe is an idea of what the future of footwear could look like, says creator Matthew Edwards
Lifestyle
1 year ago