All you need is lava: highlights of Réunion's incredible highlands

Volcanic island stands out — literally — in the Indian Ocean for its incredible topography that includes two volcanoes, three calderas and more than 300 falls 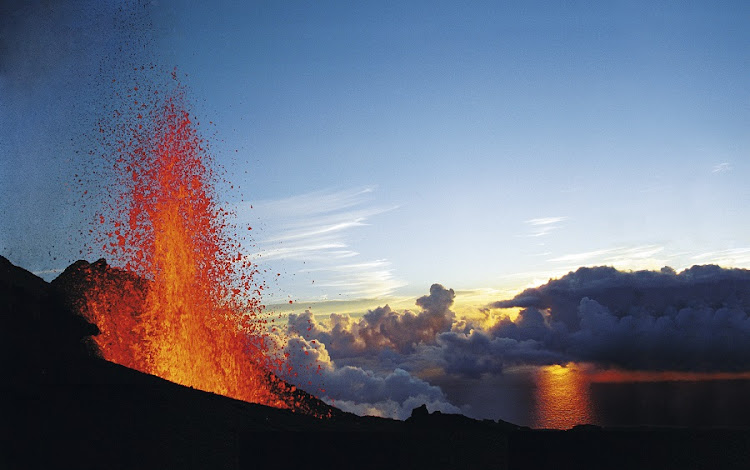 Piton de la Fournaise on Réunion island is one of the most active volcanoes in the world.
Image: Île de la Réunion Tourisme

Formed by volcanic action 3-million years ago, Réunion stands out — literally — in the Indian Ocean for its dramatic heights. With an area of 2,500km2, its middle is marked by rugged mountains, lush calderas and tropical forests. Consider that its highest peak, Piton des Neiges (Peak of Snow), is 3,069m above sea level, but just 20km from the coast, and you may have some idea of the topographical theatrics that await you — theatrics that have led some to call the island an open-air museum and a haven for hikers, climbers and lovers of all things outdoors. (It has more than 900km of waymarked trails).

Réunion National Park covers 10,000ha of the island's heart, making a whopping 42% of the land protected. The park was declared a Unesco World Heritage site in 2010 for its “pitons, cirques and remparts” (volcanic peaks, craters, and steep rock walls), hailed for their “exceptional landscapes and biodiversity”. 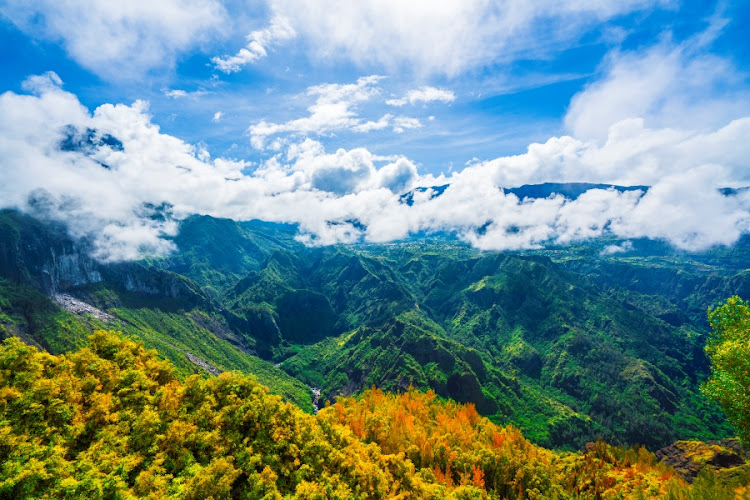 The island is also known as the Land of Lava, thanks mainly to its 500,000-year-old Piton de la Fournaise (Peak of the Furnace), one of the world’s most active volcanoes and also a Unesco heritage site. Its last eruption was in April 2021, but in the past 10 years it has erupted, on average, every nine months, posing no danger to people, though it has been known to cause traffic jams as spectators flood in to see its technicolour eruptions and lava flows from a safe distance. Reaching a height of 2,632m, it covers a third of the island. When it’s not aflame, visitors can hike inside its caldera or see it from the sky in a helicopter or small plane. 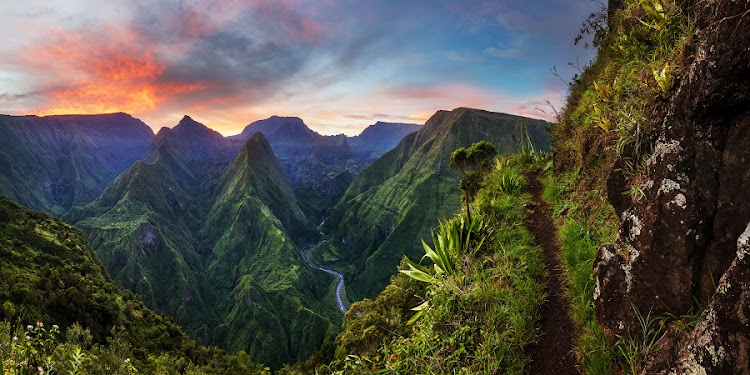 The Cirque de Mafate is one of three calderas formed by the collapse of the Piton des Neiges volcano.
Image: Île de la Réunion Tourisme

A second volcano, Piton des Neiges, has not erupted for 12,000 years. Its 3,069m peak is also the highest point in the Indian Ocean. This dormant volcano is surrounded by three calderas (natural amphitheatres formed when a volcano erupts and collapses) known as cirques: de Mafate, Salazie and Cilaos, all of which offer a cornucopia of adventures for hikers and climbers. 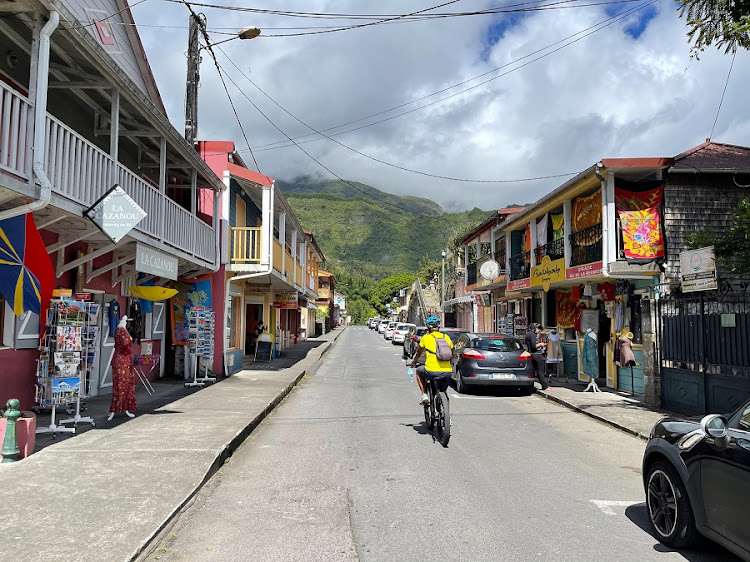 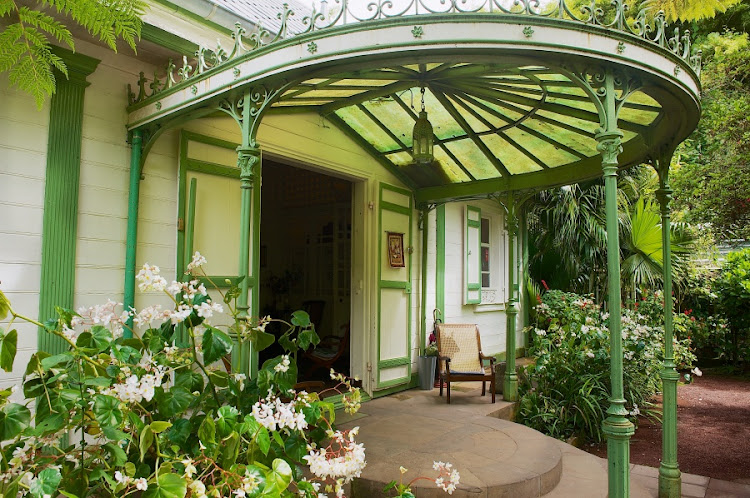 The high-altitude village of Hell-Bourg is a popular base from which to explore the Salazie Cirque. With colourful Creole houses and a quaint charm, it is officially listed as one of the most beautiful villages of France and has some historic attractions, including remnants of thermal baths — shut down after a cyclone in 1948 — on the outskirts of town, and La Maison Folio, a mansion built in the 19th century, restored and converted into a museum with an exotic garden.

The Cirque de Cilaos also has a town called Cilaos, which boasts “the only spa resort in the Indian Ocean”, where guests can relax in the curative waters of natural hot springs, which are said to relieve rheumatic pain and other bone and muscular ailments. Visitors can also choose treatments including hydromassage and powerful showers.

If you're not one for hiking, the cirques of Salazie and Cilaos are accessible by road. Mafate, however, can only be reached on foot or by helicopter. 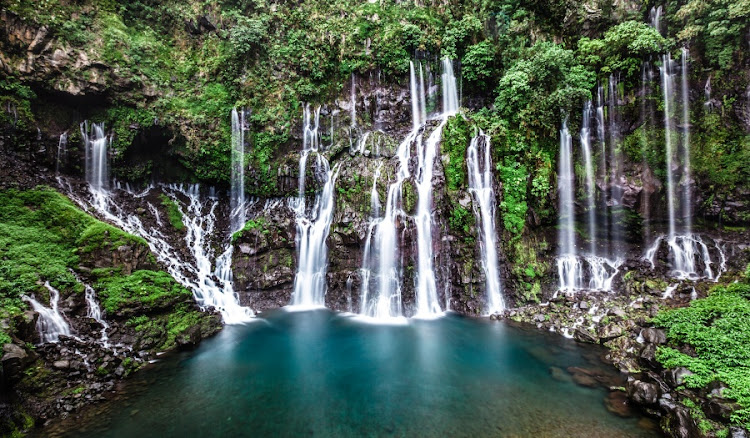 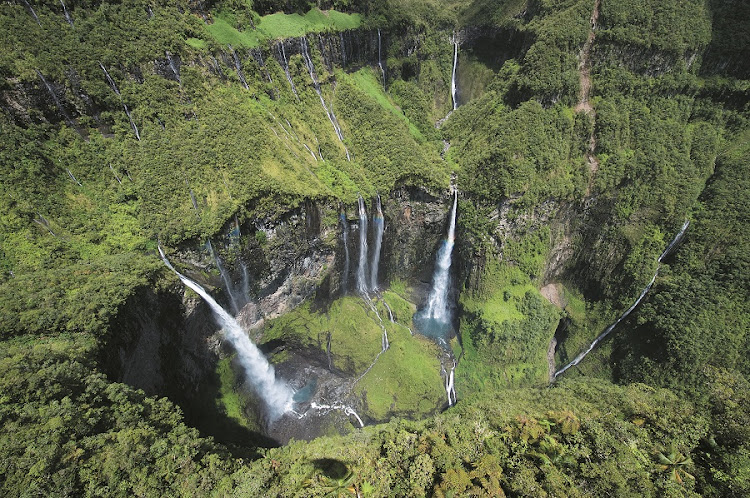 The island is also one of the wettest spots on the planet — it holds the world record for the most rain in one day (1,825mm in 1966). Rain combined with mountainous terrain means a plethora of waterfalls — more than 300, most of which are accessible. France's highest waterfall is also here, a 725m drop that's part of the extraordinary Trou de Fer (The Iron Hole), a 300m-deep chasm ringed by six waterfalls near the Cirque de Salazie. Hike or take a helicopter flip to see it, but know that only the best of the best can abseil down. The route is so treacherous it has been labelled the “Mount Everest of canyons”.

Réunion: a French island holiday to make your heart sing

Just a four-hour flight from Johannesburg, this volcanic island stands out in the Indian Ocean for its laid-back living against a backdrop of high ...
Lifestyle
1 week ago

PODCAST | Should the SA passport be decolonised?

Do you object to the use of French on your SA passport cover?
Politics
2 weeks ago

The highest-ranked in Africa, this tourist magnet comes in at number 7 on the mag’s annual list of world’s best cities. Name it and you could win a ...
Lifestyle
2 weeks ago