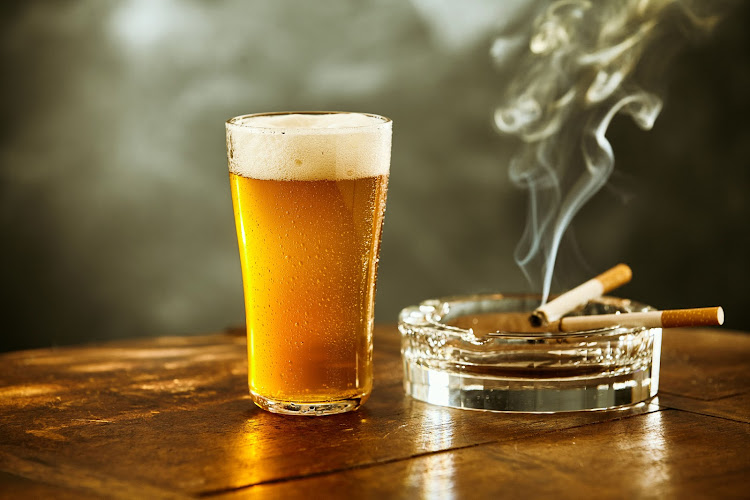 The issue of the sale of alcohol and cigarette sales during level 3 has sparked fierce debate within the National Command Council.
Image: 123RF/foodandmore

Co-operative governance minister Nkosazana Dlamini-Zuma has tabled draft level 3 regulations that propose lifting the ban on alcohol sales, but extending the prohibition on cigarette sales. The regulations also propose opening up all sectors of the economy from June 1 except hotels, restaurants, bars, gyms and other recreational facilities.

The issue of tobacco and alcohol sales split President Cyril Ramaphosa's National Command Council (NCC) down the middle, igniting so much debate that a meeting to discuss the regulations lasted five hours, with no final decision taken on tobacco sales, insiders told the Sunday Times.

The government's approach to the tobacco ban is said to be motivated by the belief that smokers would require ventilators more than anyone else should they contract Covid-19.

The government has previously asked for public comments on draft regulations before promulgating final regulations.

An insider said Dlamini-Zuma's position on extending the ban on tobacco sales appeared to be getting traction within the council.

What it's like buying illicit cigarettes, liquor during lockdown

My neighbour takes a long, hard prison drag of the gwaai , blows out some smoke and says, “These things are trash.”
Opinion & Analysis
1 year ago

"It's still work in progress because they are seriously considering issues being raised in the consultations. The view of the NCC was to reopen liquor outlets under strict conditions in level 3, but there's been opposition to that from political parties.

"No decision was taken on tobacco, but there doesn't seem to be much appetite to lift that prohibition. The NCC, like society, is extremely polarised on these matters," said the insider.

Minister in the presidency Jackson Mthembu said such intense debates are normal within the NCC and the cabinet.

"There will always be arguments for and against. If all of us were alike . that would not be helpful. Ultimately a decision is taken based on a majority view, that is how democracy works," he said.

"That there are people who lose a debate and go out to influence society through the media, I don't think that shows discipline."

Mthembu said the fact that the meeting lasted from 2pm to 7pm was proof that there was thorough debate on the matter. He said Ramaphosa will today make an announcement on the relaxation of regulations.

The draft regulations prepared by Dlamini-Zuma propose that the sale of liquor be allowed from Mondays to Thursdays and only at off-consumption sites.

As for other sectors, the government is likely to require companies employing more than 500 people, especially in construction and manufacturing, to provide transport for their workers in an attempt to ease congestion in the public transport system.

Daily screening of employees across all sectors will also be made compulsory.

All operating businesses with more than 50 employees must, where possible, make provision for staggered working hours, to limit congestion on public transport and at the workplace.

"Relevant health protocols and social distancing measures must be adhered to, in addition to the occupational health and safety directions issued by the cabinet member responsible for employment and labour," the draft regulations read.

The Black Business Council (BBC) said it will support the government's decision on easing the lockdown.

"But we will not go to war for alcohol and cigarettes.

Will the ban on cigarettes be extended even further, into level three of the lockdown regulations?
News
1 year ago

"Our position will be that such decisions are centred around the science of the virus and economics of our times," said BBC president Sandile Zungu.

Mthembu said claims that Dlamini-Zuma drafted the regulations on her own are not true.

"He said other ministers who chaired cluster committees participated in the drafting process, "but they come through her mouth because she's the minister responsible for the Disaster Management Act".

Minister of social development Lindiwe Zulu said any suggestion that Dlamini-Zuma single-handedly drafted the regulations was a "nonsensical narrative".

She said Dlamini-Zuma's inputs were in the interest of the health of South Africans and not driven by personal interests.

League president Bathabile Dlamini said the minister is under attack because of her views on alcohol and tobacco. "At all times white monopoly capital will fight strong women because they want to do as they please," she said.

Dlamini-Zuma is said to have made the same presentation as at her NCC briefing to opposition parties.

The EFF, the African Christian Democratic Party and Al Jama-ah opposed plans to allow liquor sales at level 3, and backed the government's plan not to lift the tobacco ban.

A party leader who spoke on condition of anonymity said Dlamini-Zuma told political party leaders that she had evidence from a study that smokers need ventilators more than anyone else, and that's what is justifying the ban now.

She is said to have been strongly supported by EFF leader Julius Malema, who agreed the tobacco ban must be in place until level 1.

The EFF, the African Christian Democratic Party and Al Jama-ah opposed plans to allow liquor sales at level 3, and backed the government's plan not to lift the tobacco ban

"She cited some report she got from either Johns Hopkins [University] or Harvard around smoking but she didn't share it," said one leader.

"Malema was vehement about it, vehement against the lifting of the ban."

On Friday EFF spokesman Vuyani Pambo issued a statement expressing his party's support of an extension of the liquor ban.

"Certainly the level 3 as it was presented to us this week, it is a lot more reasonable and rational. It had a lifting of the curfew, of the exercise ban and the like. But . I am not going to be committed to saying I support level 3 until I see what it looks like in writing," he said.

The party appears to have abandoned its own proposed "smart lockdown".

"I think that the Western Cape and Gauteng are the two only places where a risk-adjusted smart model is still possible, given the fact that you now have massive community infections, but I think they are the only provinces that are testing anywhere near the rate that we need to be testing," Steenhuisen said.

The DA has hauled the government to the Constitutional Court over the National Disaster Management Act and the powers it bestows on the minister of co-operative governance & traditional affairs.

But Steenhuisen said the party would not join any legal challenges over cigarettes.

The Disaster Management Act is a dangerous piece of legislation that gives a single minister powers trumping those of the president and parliament.
News
1 year ago

"I think it's up to the tobacco companies to do that . we have to focus on the issues that we think matter most and . the issues where we've been able to make a very good case of unreasonable rationality, including clothes and the military curfew."

Sibani Mngadi, spokesperson for the South African Liquor Brand Owners Association, said they had put aside more than R35m to supply personal protective equipment for free to township-based liquor traders, including taverns, should alcohol sales be allowed under level 3.

"Taverns are a critical part of the township economy and we'd like to support them to trade in the most safe possible manner during the period of the lockdown level," he said.

Mngadi said that prior to Covid-19, the liquor industry was losing more than R12bn a year to illicit alcohol trade, and the figure is expected to rise sharply.

"We are aware that South Africans are currently still procuring alcohol despite the prohibition on the sale of alcohol, therefore these numbers would have increased exponentially," he said.

Fair Trade Independent Tobacco Association chair Sinen Mnguni said it was not consulted about the decision to continue the ban.

"As industry we are disappointed in as far as the government's continuing the ban on cigarettes," he said, especially considering the spike in sales of illegal cigarettes and the potential job losses if the industry remains inactive.

The SA Informal Traders Alliance (Saita) has called on the government to lift the ban on cigarette sales under level 3 of the lockdown, warning that ...
News
1 year ago

Government punishing us for its own failures, says woman who started petition against tobacco ban

Bev Maclean - who started an online petition against the ban on the sale of cigarettes and tobacco products - has written an open letter to President ...
News
1 year ago