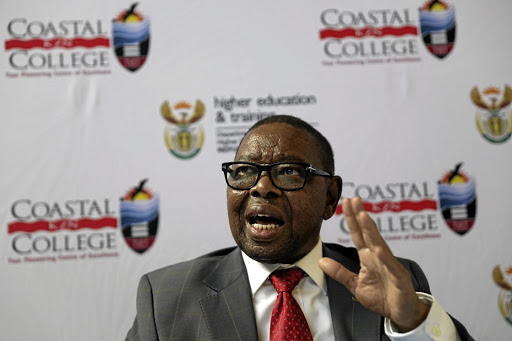 Minister of higher education Blade Nzimande has been criticised for his handling of the student funding crisis, which seems set to intensify.
Image: Sandile Ndlovu

SA's 26 universities are on a knife-edge following a call by the powerful South African Students Congress (Sasco) for a total shutdown tomorrow.

The planned shutdown will also be the focus of a meeting today of the central working committee of the EFF's national student command.

Sasco's instruction to its structures to bring teaching and learning to a halt comes after a meeting with the ANC's top six - which began on Friday and is due to resume tomorrow - at which a list of demands was submitted. Both sides agreed in principle that universities should not exclude students who owe historic debt from registering for the 2021 academic year.

The total debt owed to the 26 institutions by students is about R10bn, which includes R1.6bn owed to the University of KwaZulu-Natal (UKZN) and R1bn to Wits University, according to figures supplied to the Sunday Times.

Sasco secretary-general Buthanani Thobela said the main demand was that all students be allowed to register, and the student group - which describes itself as the biggest in Africa - wanted "implementation, not an agreement in principle".

Thobela said both sides agreed there should be no financial exclusion, "so there must be a way to engage the universities on the question of opening registrations. We agreed that there must be a collective solution to the historical debt."

We are shutting institutions that are not allowing students to register

He said some vice-chancellors had refused to engage with students.

Muzi Khoza, secretary-general of the EFF's national student command, said the call for a national shutdown "has been brewing from our branches".

"The way forward will be known after the meeting. We are busy shutting institutions that are not allowing students with historical debt to register."

Wits students took to the streets this week, demanding that those with historic debt be allowed to register. On Wednesday, a bystander, Mthokozisi Ntumba, 35, was killed in the crossfire as police fired rubber bullets to disperse protesters.

State funding for universities will be affected by a ruling in the Pretoria high court this week that set aside higher education minister Blade Nzimande's instruction to Unisa to reduce its intake of new students by 20,000.

On Thursday Nzimande announced that the department's budget would be reprioritised to meet the R7bn shortfall in National Student Financial Aid Scheme (NSFAS) money for first-year students.

Nzimande's spokesperson Ishmael Mnisi said engagements with stakeholders were continuing throughout the weekend.

"We advocate for continuous engagement between students and management so that they reach common ground in resolving the issue of historical debt."

Commenting on Sasco's call for a national shutdown, he said the department was confident that discussions with student organisations would resolve outstanding issues.

Wits protest: 'I was shot by a man who was supposed to protect me'

‘Run!’ the officer yelled. I did. He shot me anyway, recalls one student.
News
1 year ago

Asked if Nzimande could not have foreseen the chaos that failure to fund first-year students would cause, he said "engagements" had continued after the NSFAS submitted its figures.

"Government's view is that no student who meets funding and study criteria should be excluded," he said. "We approached Treasury and there was a meeting of the two ministers before cabinet took a decision."

Mnisi denied that the government had been caught napping.

He said the cabinet had agreed that a comprehensive review of student funding policy was urgently required and had instructed the department to start work on it.

Nzimande would engage university leadership to explore ways in which final-year students who are on track to graduate are able to register through acknowledgement-of-debt arrangements.

Professor Ahmed Bawa, CEO of Universities SA, the mouthpiece of the 26 universities, said the government must take the lead in finding a long-term, national solution to student debt. "The solution does not lie with the universities."

Bawa said that in the longer term, "one would hope that the idea of a partnership between government and the banking sector may provide the basis for new approaches to student funding challenges we have".

"If the issues of a proper level of university tuition fee and subsidy funding, student funding and funding for infrastructure are not resolved ... it is just a question of time before our universities suffer significant and possibly irreversible damage."

Wits protest: 'It was peaceful — then I was shot'

I am Aphelele Buqwana, one of the reporters who was shot at the Wits protest on Wednesday. I was reporting for the Voice of Wits radio station when I ...
News
1 year ago

Bawa described the NSFAS shortfall as a "shambles" that should have been resolved before the end of last year. "The scramble to make good this shortfall by dipping into the higher education budget will have an impact on the funding of universities for infrastructure development and other key elements of university operations."

But Bawa dismissed suggestions that there was a stand-off between universities and the government: "We meet regularly and we have open discussions. This doesn't mean that we agree on everything."

Education expert Labby Ramrathan from the education faculty at UKZN said the government should have given universities a bailout by settling outstanding student debt, as it had done with state-owned enterprises.

"The annual student protests linked to exclusion on financial grounds suggest that Nzimande and the government cannot claim that this matter would not escalate to the point that it has come to."

He said that "solutions should have been sought holistically to deal with historical debt since 2016".

"Deal decisively with historical debt and clear university debt. Disruptions at universities have gone on for too long."

Professor Felix Maringe, the recently retired head of the school of education at Wits, said students should not be prevented from completing their studies because they owe money. Commenting on the way the government had waited for someone to die before it found money for first-year students, he said the "fingers-crossed approach encourages waiting for the worst to happen before government intervenes".

"Government should shoulder the entire burden of student debt. Universities are not full-blown businesses and are being asked to do things they have not been created for."

Asked about the Sasco talks, ANC deputy secretary-general Jessie Duarte referred the Sunday Times to ANC spokesperson Pule Mabe, who did not respond to questions.

Historic debt owed to some of SA's universities, according to figures supplied to the Sunday Times:

Mthokozisi Ntumba wanted to better his family member’s lives. However, his heartbroken cousin says what happened to him on Wednesday means this dream ...
News
1 year ago

Police force during Wits protest was not warranted: Cyril Ramaphosa

The shooting of a bystander during a student protest in Braamfontein on Wednesday was "unnecessary", deputy higher education minister Buti Manamela ...
Politics
1 year ago